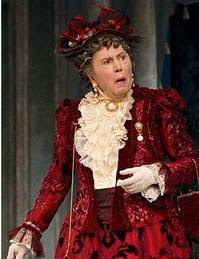 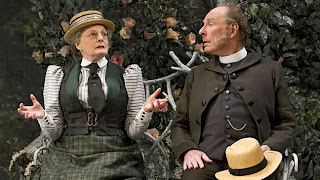 NOTHING BUT THE TRUTH
by Douglas Messerli

Oscar Wilde The Importance of Being Earnest / New York, American Airlines Theatre / the production I saw was on May 7, 2011

The central pun of Oscar Wilde's perennial comic delight—the homophonic relationship of the name Ernest and the word that characterizes "an intense and serious state of mind"—is at the heart of Wilde's work, for while the lovely women of this play, Gwendolen Fairfax (Jessie Austrian) and Cecily Cardew (Charlotte Parry), both can love only an "Ernest," a man of a serious state of mind, the young men, Algernon Moncrieff (Santino Fontana) and John Worthing (David Furr) immediately prove themselves be utter fakers and liars, both—as Algy defines it—Bunburyists, men who lie to their families about having a relative or friend elsewhere so that they can escape into the city (in Worthing's case) or into the country (in Algy's situation). And the first scene of this play is nothing if not complete evidence of these effete young mens' triviality, each competing with one another with absurd aphorisms and often meaningless bon mots. Jack, we may argue is the more serious of the two, but he is no more reliable in speaking the truth than is his friend Algernon, who besides being unscrupulous is represented as a kind of greedy glutton, particularly when it comes to cucumber sandwiches.

We find it somewhat hard to believe, accordingly, that Jack/Ernest is so smitten by love of Algy's cousin Gwendolen that is ready to marry her on the spot, that is, until we discover that Gwendolen is just as frivolous, ready to marry him on that same spot because his name, she believes, is Ernest.

All of this is great fun, but would become tiresome were it not for the existence of Gwendolen's Gorgon-like mother, Lady Bracknell (magnificently performed by Brian Bedford), of whom Worthing notes:

I don’t really know what a Gorgon is like, but I am
quite sure that Lady Bracknell is one. In any case,
she is a monster, without being a myth, which is
rather unfair…

A great believer in "natural ignorance," Lady Bracknell is a stolid column of English conventionality, ready to accept Worthing because of his lack of political beliefs, habit of smoking, and apparent wealth, but unable to even fathom a man who has "lost both of his parents"—"To lose one parent, Mr. Worthing, may be regarded as a misfortune; to lose both looks like carelessness."—and is absolutely flabbergasted when she is told that he was found in a black leather handbag in Victoria Station!

Bedford plays this most luscious of monsters absolutely straight, no winks to the audience, no loopy drag-queen flopping of hands, and no change of pitch in voice. Lady Bracknell, in Bedford's shoes, is, if anything, more of a lady than ever, muttering her ridiculous pronunciamentoes in a post-menopausal voice that seems made for the role. To watch him at work, although his "acting" is so flawless that one cannot comprehend it as "work," is a true joy, something that for me will be hard to forget, and hopefully something I can remember for the rest of my life.

The remainder of the play, as everyone knows, revolves around a series of hilarious coincidences and more outrageous one-liners than even Henny Youngman might crack in a single night. Wilde's play literally drips with wit.

As outrageous as it first sounds, Algy's suggestion that women only come to call one another sister "after they have called each other a lot of other things," comes true when, Gwendolen, curious about Jack's/Ernest's house in the country, comes visiting only to find another woman hosting tea. Their bitchy politeness crackles with firery hate.

Even Lady Bracknell's pronouncement of Jack's "carelessness" with regard to the loss of his parents is apparently close to the truth, when we discover that Miss Prism (Jayne Houdyshell)—currently Cecily's tutor—once worked for Lady Bracknell's sister whose child she carried away forever in a perambulator one morning, and, confusing it with her romantic manuscript, placed the romance in the perambulator and the child in her large black leather handbag, the act launching a series of prismatic images of what this class-structured society has wrought.

The revelation suddenly makes the two men, Algernon and Jack, brothers—which they have spiritually been all along. Jack, who soon after discovers that his birth name was Ernest, can now marry his cousin Gwendolen, as Algy, although he must forfeit the baptismal name of Ernest, will now be permitted to marry the young Cecily. Thus all the characters can be said to have been incorporated into one large family, where everyone will live happily ever after...if they can remain earnest!

It is doubtful, however, that in such a world of winding tales and deceit, as this family has suffered, that deep seriousness will be long permitted. As Ernest (formally Jack) admits: "It is a terrible thing for a man to find out suddenly that all his life he has been speaking nothing but the truth."