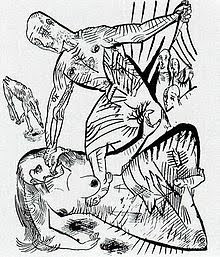 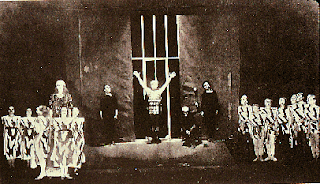 
Night sky. Tower with large red iron grille as door; torches the only light; black ground, rising to the tower in such a way that all the figures appear in relief.
THE MAN in blue armor, white face, kerchief covering a wound, with a crowd of men—savage in appearance, gray-and-red kerchiefs, white-black-and-brown clothes, signs on their clothes, bare legs, long-handled torches, bells, din—creeping up with handles of torches extended and lights; wearily, reluctantly try to hold back the adventurer, pull his horse to the ground; he walks on, they open up the circle around him, crying out in a slow crescendo.

Hesitantly follow him again in chain formation; he, with the torch bearer in front of him, heads the procession.

While they are about to pull his horse to the ground, women with their leader ascend steps on the left.
WOMAN, red clothes, loose yellow hair, tall.

WOMAN, loud. With my breath I fan the yellow disc of the sun, my eye collects the jubilation of the men, their stammering lust prowls around me like a beast.

FEMALE ATTENDANTS separate themselves from her, only now catch sight of the stranger.

FIRST FEMALE ATTENDANT. His breath attaches itself to the virgin!

FIRST MAN to the others. Our master is like the moon that rises in the East.

SECOND GIRL, quiet, her face averted. When will she be enfolded joyfully?

Listening, alert, the CHORUS walks round the whole stage, dispersed in groups; THE MAN and the WOMAN meet in front of the gate.
(Pause.)

WOMAN observes him spellbound, then to herself. Who is the stranger that has looked on me?

GIRLS press to the fore.

FIRST GIRL recognizes him, cries out. His sister died of love.

THE MAN, astonished; his procession halts. Am I real? What did the shadows say?

Raising his face to her.

Did you look at me, did I look at you?

WOMAN, filled with fear and longing. Who is the pallid man? Hold him back.

FIRST GIRL, with a piercing scream, runs back. Do you let him in? It is he who strangles my little sister praying in the temple.

FIRST MAN to the girl. We saw him stride through the fire, his feet unharmed.

SECOND MAN. He tortured animals to death, killed neighing mares by the pressure of his thighs.

THIRD MAN. Birds that ran before us he made blind, stifled red fishes in the sand.

THE MAN angry, heated. Who is she that like an animal proudly grazes amidst her kin?

FIRST MAN. She divines what none has understood.

SECOND MAN. She perceives what none has seen or heard.

THIRD MAN. They say shy birds approach her and let themselves be seized.

GIRLS in time with the men.

FIRST GIRL. Lady, let us flee. Extinguish the flares of the leader.

THIRD GIRL. He shall not be our guest or breathe our air. Let him not lodge with us, he frightens me.

MEN, hesitant, walk on, WOMEN crowd together anxiously. The WOMAN goes up to THE MAN, prowling, cautious.

FIRST GIRL. He has no luck.

FIRST MAN. She has no shame.

WOMAN. Why do you bind me, man, with your gaze? Ravening light, you confound my flame! Devouring life overpowers me. O take away my terrible hope—and may torment overpower you.

THE MAN, enraged. My men, now brand her with my sign, hot iron into her red flesh.

MEN carry out his order. First the CHORUS, with their lights, struggle with her, then the OLD MAN with the iron; he rips open her dress and brands her.

WOMAN, crying out in terrible pain. Beat back those men, the devouring corpses.

She leaps at him with a knife and strikes a wound in his side. THE MAN falls.

MEN. Free this man possessed, strike down the devil. Alas for us innocents, bury the conqueror. We do not know him.

THE MAN, in convulsions, singing with a bleeding, visible wound. Senseless craving from horror to horror, unappeasable rotation in the void. Birth pangs without birth, hurtling down of the sun, quaking of space. The end of those who praised me. Oh, your unmerciful word.

MEN. We do not know him; spare us. Come, you singing girls, let us celebrate our nuptials on his bed of affliction.

GIRLS. He frightens us; you we loved even before you came.

Three masked men on the wall lower a coffin on ropes; the wounded man, hardly stirring now, is placed inside the tower. WOMEN retire with the MEN. The OLD MAN rises and locks the door, all is dark, a torch, quiet, blue light above in the cage.

WOMAN, moaning and revengeful. He cannot live, nor die; how white he is!

She creeps round the cage like a panther. She crawls up to the cage inquisitively, grips the bars lasciviously, inscribes a large white cross on the tower, cries out.
Open the gate; I must be with him.

Shakes the bars in despair.

MEN and WOMEN, enjoying themselves in the shadows, confused. We have lost the key—we shall find it—have you got it?— haven't you seen it?—we are not guilty of your plight, we do not know you—
They go back again. A cock crows, a pale light rises in the background.

WOMAN slides her arm through the bars and prods his wound, hissing maliciously, like an adder. Pale one, do you recoil? Do you know fear? Are you only asleep? Are you awake? Can you hear me?

THE MAN, inside, breathing heavily, raises his head with difficulty; later, moves one hand; then slowly rises, singing higher and higher, soaring.
Wind that wanders, time repeating time, solitude, repose and hunger confuse me.
Worlds that circle past, no air, it grows long as evening.

WOMAN, incipient fear. So much light is flowing from the gap, so much strength from the gate, pale as a corpse he's turned.

Once more creeps up the steps, her body trembling, triumphant once more and crying out with a high voice. THE MAN has slowly risen, leans against the grille, slowly grows.

WOMAN weakening, furious. A wild beast I tame in this cage; is it with hunger your song barks?

THE MAN. Am I the real one, you the dead ensnared? Why are you turning pale?

WOMAN, trembling. Do you insult me, corpse?

THE MAN, powerfully. Stars and moon! Woman! In dream or awake, I saw a singing creature brightly shine. Breathing, dark things become clear to me. Who nourishes me?

WOMAN covers him entirely with her body; separated by the grille, to which she clings high up in the air like a monkey.

THE MAN. Who suckles me with blood? I devour your melting flesh.

WOMAN. I will not let you live, you vampire, piecemeal you feed on me, weaken me, woe to you, I shall kill you—you fetter me—you I caught and caged—and you are holding me—let go of me. Your love imprisons me—grips me as with iron chains—throttles me—let go—help! I lost the key that kept you prisoner.

Lets go the grille, writhes on the steps like a dying annual, her thighs and muscles convulsed.

THE MAN stands upright now, pulls open the gate, touches the woman—who rears up stiffly, dead white—with his fingers. She feels that her end is near, highest tension, released in a slowly diminishing scream; she collapses and, as she falls, tears away the torch from the hands of the rising leader. The torch goes out and covers everything in a shower of sparks. He stands on the highest step; men and women who attempt to flee from him run into his way, screaming.

CHORUS. The devil! Tame him, save yourselves, save your selves if you can—all is lost!

He walks straight towards them. Kills them like mosquitoes and leaves red behind. From very far away, crowing of cocks.

____
First performed at the Kunstchau Theatre in Vienna in 1909, Murderer, the Women's Hope, by artist Oscar Kokoschka, was one of the seminal plays of German Expressionism. The shocking representation of the battle of the sexes, ends with everyone except the Man, dying. The Vienna premiere cause a great deal of controversy, as soldiers, watching the play from the edge of the garden, rushed through the barrier, a riot breaking out before the police arrived. Kokoschka, as well as his writer friends Adolf Loos and Karl Kraus, were issued a warning, but not arrested for disturbing the peace. But both public and press, for the most part, detested the play, describing it as a collection of "screaming images," and a "pretentious Decoration Drama."

Posted by Douglas Messerli at 7:53 AM