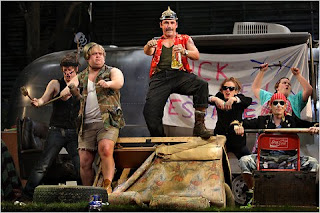 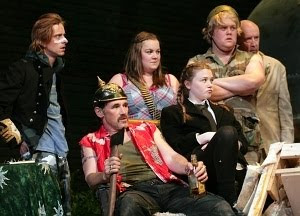 Jez Butterworth's play Jerusalem begins with a blindingly, blaring party in a small wooded clearing inhabited primarily by a Waterloo trailer. In the quick glimpse of the strobe-lit bacchanalia it appears that the celebrating group is made up mostly of young teenagers. But the next morning we gradually perceive, as court processors arrive to post the demand the clearance of the property, that the main celebrant and owner of the trailer is a burned-out, alcoholic, drug consuming former bicycling stunt artist, Johnny "Rooster" Byron (Mark Rylance), whose woodland trailer plot serves as a kind of open house for any and all discontent beings near the small town of Flintock not far from Stonehenge in Wiltshire County, England.

Among Rooster's several regulars are his wanabe "mate," Ginger (Mackenzie Crook), a young man who has never outgrown this world of Peter Panism; a former Professor (Alan David) who drops by mainly for the alcoholic beverages freely proffered by the host; an overweight and under educated butcher, Davey (John Gallagher, Jr.); a soon-to-be traveler to Australia, Lee (Danny Kirrane); and two silly and rather unattractive teenage girls, Pea and Tanya, the later quite desperate to give up her virginity; and, upon occasion, the former Queen of the Fairies, Phaedra (Aimeé-Ffion Edwards), gone missing from the home of her violent step-father, Troy Whitworth. These and others help keep alive the myths surrounding Rooster, and, in turn, boost his morale as he carouses daily, in battle after battle, straight into the jaws of death.

In the context of Butterworth's play, Rooster is represented as something akin to a figure of Druid or Nordic history, or, at least, a kind of Falstaff-like celebrator, a larger than life "hero," who stands against the staid and boring behavior of the small town bourgeoisie surrounding him, so desperately desirous of ousting this outsider from the environs so that they can quickly build up a few more suburban-like houses or apartments.

Given the goings-on in this little "Jerusalem," the loud, late-night parties, underage drinking, drug consumption, and sex, I think it safe to say that nearly every member of the elderly Sunday audience who tumbled into The Music Box mostly from New Jersey, Connecticut, and Bucks County, Pennsylvania, like the good citizens of Flintock, would have just as readily signed the petition to remove Johnny "Rooster" Bryon from his little plot—although given what we later discover about the hypocritical, alcoholic, and drug-hungry adults we encounter from the community, it is doubtful my audience would venture to live in Flintock either.

So, why do audiences like the one I joined sit through the assaults on their sensibilities and, at the end of it, after a series of ridiculous plot developments I will soon reveal, applaud, not just politely, but enthusiastically cheering on these obvious misfits?

There are, perhaps, a number of reasons, but the most obvious one bears the name Mark Rylance. For Rylance is not just a good actor, he creates, embodies completely, and inhabits the character of Rooster so fully that we are in awe as we watch a thing of words, a literary character, grow, bit by bit, into a monstrous yet humanly pitiable being with whom we have no choice but to contend. I sat in the front row of the theater, where I and the others there not only suffered some of the slings and arrows of spit, beer, sod, and blood, but watched his towering performance as he stood, often just in front of my seat, since the characters claimed it was the spot where they smelled the wonderful wafts of wild garlic and where Rooster drew his ex-wife and other figures to look into eyes, whereupon a deep rumbling sound shook the theater at its roots. Rylance is so convincing, so commanding in his role that I believed in his dark powers even without that stage device.

For much of each act Rooster creeps round his "Jerusalem"—nearly crippled by all those "slings and arrows," the Evel Knievel-like jumping stunts, the numerous bar fights and beating, and his advancing age—covered in layers of sweat, beer, liquor, wine, and other liquid ablutions, spinning off remarkable myths to his spellbound, if skeptical, merry band. The eldest and least imaginative of Rooster's protégées, Ginger, particularly struggles to restore some rational logic to Roosters' larger-than-life proclamations; but in that very act we foresee that, having stayed on beyond his time, he is soon to join the failed and flailing folk of Flintock adults.

Rooster may be a pied-piper, but his powers have little effect upon his own small son Andy, who has to suffer torments from his fellow schoolmates just for being the man's son. And as much merriment as Rooster provides his young teen friends, he has few gifts for the very young and no comprehension of how to nurture.

Throughout this endless turbulence, Rylance, if at times going a bit over the top (how could he not in such an operatic role?) literally takes over the stage with a sort of Medea-like dance of revenge against all the hundreds of offences he suffered and committed himself.

One seldom witnesses these days such a complete theatrical abandonment of an actor's own self into that of his character, so that by play's end one almost feels the character and his body might collapse as the actor goes flying through the high canopy of trees imported onto The Music Box stage, a feeling reinforced by Rylance's compulsion during the curtain call cacophony, to jump and up and down a couple of times as if to prove he was not really as crippled and bound to earth as was Rooster.

I wish only that the story were half as convincing. Beyond the bad boy behavior of its characters, Butterworth presents little else except to suggest that Rooster is heir and kin to a long tradition of English, Druid, and Nordic brutes, including St. George, the slayer of dragons, on whose celebratory day the event's occur. Rooster, the author hints, is one of the giants of English lore, who must battle against the petty societal demands that he faces, including a trio of dangerously violent brother who are convinced that he has had sexual intercourse with Phaedra, and, of course, the court decree with bulldozers waiting nearby to shatter his castle come morning.

After a bloody beating and brutal branding by the Whitworth brothers, Rooster pours gasoline across his yard, curses the earth about him for anyone who touches it, and calls out the names of his family genealogy as he beats the drum he has told the children will bring out the giants.

Rooster has also revealed to his son that he bears within a kind of "royal" blood, obviously of Blood group O, for which each month Rooster is paid for donating, the source of his money for all the good times.

Royal blood, giants in the earth, blood kinship, curses and revenge—all the tribal and clan claims that have so plagued ancient Asian, African, Mid-Eastern, European worlds and modern cultures everywhere are the forces that Johnny "Rooster" Byron finally calls up! Except for a few stuck-up descendants of Plymouth Rock, the USA has nothing quite like this, which explains our absurd fascination, I suppose, with English royalty, along with so many Americans' Anglophile obsessions, and, probably, some of the audience members rapt appreciation of this play.
Despite Rylance's wondrous performance, however, I was not convinced that those curses, the drumbeats, even the sonorous rumbles, would bring anyone to his rescue to save his sacred green garden from the bulldozers about to descend. The gasoline might set one such machine afire, but there are others—there will always be others—behind it, and the people of Flintock and environs have already been cursed by the contingencies of contemporary life. But then, I never believed in the regeneration by rain in The Wasteland either, a poem written by another Anglophile equally evoking hierarchical myths of tradition. If Rooster is Faust, so is any passing thug.

I'll put my faith in the young Lee, the boy who perceives that it's necessary to escape, and has a number of intelligent and silly reasons for having chosen Australia. Even his desire to change names—completely incomprehensible to the leaden-brained Davey—suggests Lee seeks a new identity and life, free from all the things that Rooster attempts to conjure up. If that is Butterworth's point, I toast Jerusalem as a play as well as a great vehicle for Rylance's talents. But if we are to suppose that the man who once died, only to come back to life, will rise again, next time I'll root for the dragon.