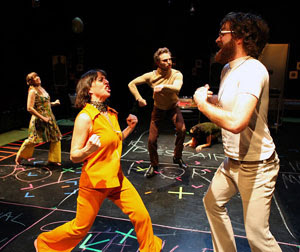 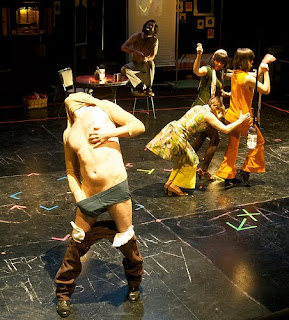 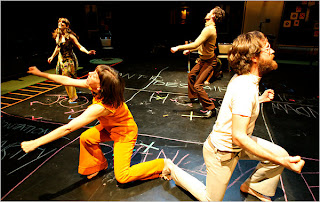 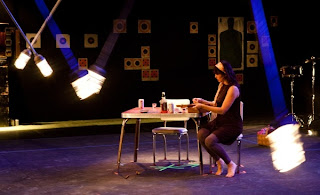 APPROACHING THE REAL
by Douglas Messerli

Kirk Lynn The Method Gun, created and performed by Rude Mechs / Culver City, Kirk Douglas Theatre / the performance I saw was on June 14, 2011

In their play The Method Gun the Austin-based collaborative Rude Mechanicals has created a delightful theatrical work that combines satire, whimsy, history, and naturalist theater in a way that few works today have attempted.

The subject, or one might say the missing center of their work, is a drama teacher, Stella Burden, with whom the five players of The Method Gun had long worked—that is until she suddenly disappeared into Ecuador or Paraguay.

Actress Hannah Kenah explains to the audience at the play's start, that her Rude Mechs company had found play texts, lesson books, films, and interviews about Stella Burden and her method—nicknamed the "The Approach"— in libraries and other locations near Austin. And, by coincidence, a grant led one of their members to Ecuador, where Stella was evidently last spotted.

As early as August 14, 2006, the company posted a Stella Burden site, explaining that they were "conducting research" for The Method Gun to create "a fictional biography and a theatrical production tracing the life and tragic death of Stella Burden (a.k.a. "the other Stella"), the "other" obviously referencing Stella Adler, whose "Studio of Acting" helped to make famous "The Method" of the Stanislavski system.

The work that the Rude Mechs created centers on those five remaining students (Carl Reyholt, Connie Torrey, Koko Bond, Robert "Hops" Gilbert, and Elizabeth Johns), now without a leader, but attempting to keep their company together in an interminable rehearsal of several years (based on Burden's own methods) of a production of A Streetcar Named Desire—without the major characters of Blanche, Stanley, Stella, and Mitch. We experience, accordingly, the company's reenactment of some of Stella Burden's principles, most notably on "how to cry" and "how to kiss," the company members' squabbles, sexual interrelations, fears, doubts, and later, questionable fame for being the last students of Burden, as they are interviewed, filmed, and trotted out in university theater conferences. One by one they reveal the few objects Stella left behind, a small plastic tiger and a bird cage wherein sits a gun, suggesting to the actors that everything they do is a matter of life or death.

At the core of these various activities is the almost empty play they are rehearsing—the characters consisting of Pablo, the Paper Boy, a Tamale Vendor, a Colored Woman, a Mexican Woman, a Negro Woman, Steve, Stella's friend Eunice, the Nurse, and the Doctor—a truly lunatic production, which, nonetheless, is quite revelatory of the play itself.

Every now and then the actors step out of character, speaking directly to the audience about events or, at one point, asking audience members to take out small pieces of paper and write down the teacher or other person who most influenced them. The action also includes—in contrapuntal reaction to the absurdly strict methods of "The Approach" (hinting at the equally absurd restrictions of Adler's and Lee Strasberg's "The Method")—a ridiculously witty tiger, who from time to time appears ready to dine on the actors, and in the end, goes off with their most contentious member, Elizabeth Johns. The play also presents a truly gratuitous sex scene, wherein the women begin kissing and the men run in from the wings, stark-naked, except for balloon's tied to their penises, thus keeping them seemingly erect.

If this all sounds strangely experimental, it is not. For the Rude Mechs have balanced their play between satire and a sense of modest reverence. They are, after all, actors themselves, and as loony as Burden's techniques may appear, the actor-characters keep a respectful distance from all-out camp.

Of course, the play is a satire at heart, and as much as the audience may wish to believe in such a strict theatrical authoritarian or that good theater results from such stunted techniques, the play itself pushes against this. Yet the actors (Thomas Graves, Hannah Kenah, Lana Lesley, E. Jason Liebrecht, and Shawn Sides, who also served as director) have not only a respect for the fiction they have created but have expanded the myth of Stella Burden far beyond the theater stage. In response to their various web calls for information about this obscure teacher, the group or others noted her interest in the Los Angeles artist Chris Burden, who not only shared her last name but was himself injured by a gun during an art performance. The artist claims no knowledge of her.

In some reports, Stella is said to have been killed by a gun similar to one left behind. In still another commentary, a writer notes that when Stella Adler performed in film she added an "r" to her name (Ardler), while Stella Burden dropped the "r" when she performed in that medium (Buden). When asked by a student whether this had any relationship between the two, Stella wittily and vaguely punned: "Some are and others aren't."

The strangest suggestion is that Burden's close relationship with Marilyn Monroe may have been behind the actresses' breakup with Joe DiMaggio!

All of this lovely nonsense reminds me, in part, of Eleanor Antin's establishment of her performative dancer, Eleanora Antinova, for whom Antin created photos of works she had choreographed, a series of performed plays, drawings, autobiographical writings, etc., going so far as to lecture on her life with Diagaliev and the Ballet Russe at the Museum of Modern Art in New York, where several people approached her in awe, one even offering to support her balletic school. It also reminds me a little of my own self-created author Claude Richochet, whose various works have appeared in books and journals over the years.

In short, The Method Gun is not simply a work of the stage but is a grander creation of theatrical history and fiction.

On stage, the actors finally reach what appears to be an impasse, Elizabeth Johns suggesting they sell everything and go away to another country. The others, however, are adamant in their devotion to the single performance of their play-without-a-play the next day. The tension becomes so palpable that one member grabs the gun, shooting it at each of them. It is, after all and fortunately, only a stage gun that shoots blanks.

Yet when they actually do perform Williams' "shell," the actors (both Burden's supposed company and the Rude Mechs) do endanger their lives. Swinging several lamps in opposing directions, company members silently enact their roles within range of the missiles with a balletic intensity, balancing the real possibility of being killed or at least knocked out with the concentration on their miniscule roles put into motion. The effect is absolutely stunning, and the audience was truly awed. The company responded to the audience with a projected listing upon the walls of the those figures who had been so important in their lives. Among them was the playwright Mac Wellman. I had written the name of my mentor Marjorie Perloff, which somehow was misread as Penloff—the "r" disappearing just as it had for Stella Burden, she too becoming one of the ones who "aren't."