Douglas Messerli "Between You and Me" (on Edward Albee's Me, Myself and I) 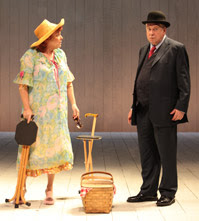 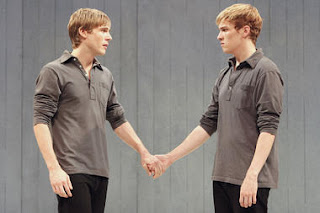 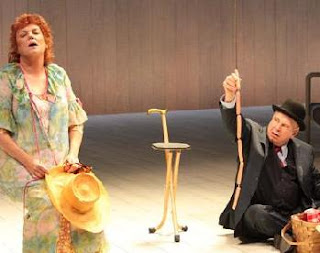 BETWEEN YOU AND ME
by Douglas Messerli

Edward Albee Me, Myself and I, The Berlind Theatre, McCarter Theatre Center, Princeton University, January 11, 2008 [the performance I saw was a matinee on January 19, 2008]

Edward Albee’s new play, Me, Myself & I, is in some senses a return to his earliest work, more influenced by Beckett and what we used to call the absurdist theater than the several plays in the intervening years, which may have something to do with his recent return to his earliest work, The Zoo Story in writing its sequel Peter and Jerry of 2007.

The world premiere of the new play at the Berlind Theatre at Princeton University, a production directed by Emily Mann, confronts the audience during the first scene with an architectural perspective (the set is outlined with a rectangular of strings) of a bedroom, featuring only a double bed, inhabited by Mother (Tyne Daly) and her Dr. (the hilarious Brian Murray)—a man who for the past 28 years has replaced her missing husband (he has disappeared upon the announcement that he was the father of identical twins)—sleeping, dressed still in suit and shoes. With the sudden appearance of one of the twins, OTTO, we quickly discover the depths of her lunacy as her son and Dr. recount her reactions to the news of the twin births and her illogical logical actions of naming them both (they are, after all spitting images of each other) Otto—one whose name reads left to right, the other right to left, and one whose name is capitalized, the other all in lower case! The two dress alike, and although she perceives that one (the loud and evil OTTO) does not love her while the other otto (the softer spoken good otto) is a devoted son, even she cannot tell them apart! We later discover that she cannot remember which of her Ottos was born first; she has, she declares, lost the papers!.

So has Albee exaggerated the dilemmas of all identical twins, two beings so alike that, like many twins, they speak a kind of private language and—employing the lurid fascination of gay (and heterosexual) pornography—even share some in some sexual delights. These brothers, however, emphatically declare they are “straight”—or perhaps, to employ the malapropism of OTTO (“We’re straight as a gate”), “strait,” very narrow in their perspectives.

Both brothers dislike their mother’s Dr., and OTTO warns him that he should leave, since their father will soon be home accompanied by six panthers and a load of emeralds with which he had promised to “bathe” their mother (the Dr. sardonically suggests the husband may have said “pave”). OTTO also announces that he is going to become Chinese and that otto is no longer his brother, that he has a new brother.

Any family might be nonplussed by these strange pronouncements, but Mother and Dr. are not just any family. Mother is, as the Dr. suggests, utterly demented, insane as the Dr.—who can only be equally insane to remain in her bed—is there to help prove it to the audience! The results are some of Albee’s wittiest dialogue since The Zoo Story and Who’s Afraid of Virginia Woolf?. As the dueling duo attempt to debate the implications of OTTO’s statements—does his statement that otto is no longer his brother mean that otto no longer exists?—an older patron in the row in front of me spoke out, “This is all very silly—and confusing!” Indeed it is both silly and confusing, but also gleefully intriguing as Albee pushes us to realize that the relation of twins—particularly this identical pair—is every bit as impossible as the relationships each of us have with our mirror images—with ourselves.

Indeed, the brother OTTO has discovered is his mirror image, is himself. Gradually, as he and otto describe their almost enchanted youth, the deep love they have between them, it becomes apparent that the bad-boy OTTO has been psychologically forced into his new relationship by his brother’s love for a woman, Maureen (the Mother’s conversations with the Irish, Chippewa-Indian, Scottish, French girl are some of the funniest of the play). Even though he does what any healthy identical twin might do, beds Maureen pretending to be his brother, OTTO clearly feels in this new relationship that he has lost himself to the intruder. He has found himself again, accordingly, as a new man, as a Chinese man whose brother is the man in the mirror, Otto (an italicized self).

Unfortunately, the second act is only a playing out of the situation of the first. However, if Daly in the first seemed uneasy with the shifting realities of the play, by the second act she had clearly discovered herself as a truly mad Mother, destroying nearly everything in her path. Like a kind of Beckettian Mamma Rose, in her bullying insanity, Mother sees herself as doing the very best by everyone. After an impossibly crazed conversation with Maureen, a woman worried about otto’s sanity since his brother has refused his existence, Mother declares to Dr., “Well that went well, I think.”

When all in this dysfunctional family seem doomed in their attempts to love, the father miraculously does return in a coach led by six blank panthers followed by a cart of glowing emeralds—brilliantly portrayed in emblematic form as “The Happy Ending”—Mother excoriates her husband for having abandoned her. To everyone’s amazement, without saying a word, the former Father returns to his coach and speeds off. The family is left again in complete abandonment to their “strait” self-loves and loathings. Yet as the two twins, OTTO and otto, hug goodbye—perceiving there is still something left of their intense former relationship—we realize that they are better off on their own than as beings entrapped in each other’s identity, that they will stumble along in the gap just as we all do, forward or backward, loudly or softly, for better or worse.

Posted by Douglas Messerli at 7:40 AM