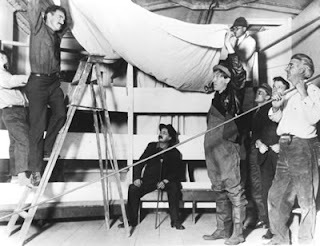 CELEBRATION OF SUPPRESSION
by Douglas Messerli

George Cram Cook's and Susan Glaspell's satire on Freudian analysis was first produced in Provincetown in July of 1915, as the very second play performed by the company. There is some question whether Cook and Glaspell arrived in Provincetown with the play in hand, or whether, naive as they were about theater, they presumed that, since they themselves were to be the major actors, they could simply ad lib the work. What that might mean for the character of Mabel, played in Provincetown by Lucy Huffaker, is not clear. But perhaps, since she was a close friend of Glaspell's, she knew the subject intimately.

Certainly the issues which the play satirized were well known throughout Greenwich Village, where psychoanalyst A. A. Brill had introduced Freud's and Jung's theories, and numerous essays had been written and published, particularly Max Eastman's two-part article in June and July in Everybody's Magazine. Theater historian Jeff Kennedy argues that the playwright couple had obviously read Eastman's piece—which gives further credence to the idea that they were writing the play at the very time of the production—because of its reference to a Freudian case in which a woman had repressed feelings for her brother-in-law as well as Eastman mentioning a quote from A. A. Brill about a woman who dreamt she was in a street with a flock of chickens.

Some critics argue that the performance occurred before Glaspell actually wrote down most of the play's best lines, but the couple would have had to be brilliantly clever performers to ad lib some of the most hilarious of the psychoanalysts' interpretations, namely that the command Mabel hears, "Step hen," actually calls up her brother's-in-law's first name, Stephen, and that the whole image of a hen derives from her sister-in-law's first name, Henrietta. And the play, although at times no more than a one-line joke about psychoanalysis, is overall far more sophisticated than its structure might suggest.

Henrietta may be laughed at for her complete immersion in and belief of Freud's and Jung's theories, but she is also presented as an intelligent, strong-willed, and free-wheeling woman, able—even with great pain—to give up her husband if he truly feels walled-in by their relationship. What she cannot endure is that her sister might also be in love with him and all too willing to run off with the man for whom the psychiatrist has convinced her she is repressing her love.

This short play is a long ways from almost any other work of its day in presenting a woman who is able to speak intelligently on psychology and even write layman essays on the subject. Although Henrietta is not trained as a psychologist, she nearly is as convincing in her interpretations of her sister's dream as the psychiatrist; and she is most perceptive in observing her own husband's disenchantment with his life, part of which involves her compulsion to awaken him several times each night, demanding to hear his dreams. The situation reminds me of the incidents in Marianne Hauser's novel, Dark Dominion, a work which did not appear until 1947!

Even if upon discovering that those around her have been suppressing desires that exclude her-- Henrietta changes her entire viewpoint of the psychoanalytic world too quickly--the play still reveals that she is open-minded about life, and if, at play's end, both she had Stephen suggest that Mabel should suppress her desires, the irony of their statement is that they are not at all celebrating suppression. For is it is clear that the couple at the heart of the play will continue being quite forthright about their likes and dislikes.

If Suppressed Desires is not a great satire, seeming at times to be more a skit than a one-act play, it is an intelligent skit, witty and, in some ways, far ahead of its time.