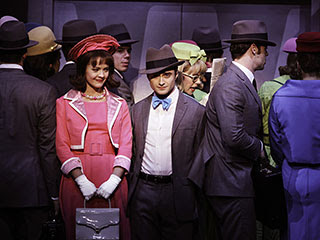 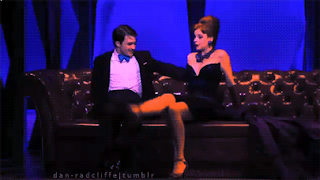 THE COMPANY WAY
by Douglas Messerli

Abe Burrows, Jack Weinstock, and Willie Gilbert (book, based on the book by Shepherd Mead), Frank Loesser (music and lyrics) How to Succeed in Business without Really Trying / New York, Al Hirschfeld Theater, 2011 / the performance I attended was a matinee on May 7, 2011

I will admit to a certain sentimental attachment to the American Musical Theater, although I feel, given the quality of the musicals for which I care, there is no reason for apology. Most of my friends who cannot comprehend my love of this genre have perhaps never seen a musical comedy before 1970, when the genre, as far as I'm concerned, almost died. The handful of good musicals since that time have been so few (most of them composed by Stephen Sondheim) that one might almost say that the form has died out. Today, except for revivals, musical comedy is for audiences who like songs consisting of three memorable notes, repeated through chorus upon chorus of driveling lyrics sung at very high decibels. But then, we do, from time to time, have wonderful revivals of the older works of this genre that remind us of what the musical theater was all about.

How to Succeed in Business without Really Trying, the 1961 New York Drama Critics and Pulitzer Prize-winning gem by Frank Loesser, was not, I am afraid, one of the "wonderful revivals." I do not mean to suggest that it was not worth attending, for, at moments, this version was absolutely delightful, but overall it simply couldn't live up the standards of the original and the movie version.

I have never before sat in an audience with so many first-time theater-goers, mostly teenage girls and their slightly stunned families in tow. The girl next to me was celebrating her sixteenth birthday and "just had see" Daniel Radcliffe, this revival's star attraction, "in the flesh." In some senses the freshness of the fans was a treat. And Radcliffe, a trouper already at age 22, was not about to disappoint them.

Radcliffe, who I suspect has by this time quite settled into his performance, was better by far than the critics led audiences to believe. Although, as the New York Times suggested he is not a natural "song and dance man" (I am not quite sure what that means, and when I think of such figures I can only conjure up Robert Preston and Robert Morse, the original J. Pierrepont Finch, neither of them great singers or even able dancers!), he can now belt out a tuneful song and, with the help of the able chorus, jump, leap, and hoof it across the stage quite ably. Once in a while you can still see him grimace a bit, as if muttering deep within, "I'm gonna be great!" And, at moments, he is! If nothing else you have to recognize that Radcliffe is giving his all, which unfortunately, if you have seen Robert Morse in the role—I saw only the movie version, but listened to the original cast recording so many hundreds of times in my youth that the old wax stereo recording is all scratches and scrapes—is just not enough.

Oddly, given the fact that he has now been nominated for a Tony for a supporting role (while Radcliffe was ignored), John Larroquette seemed far less engaged in the piece, speeding through his lines at times as if he were trying to catch a plane, and other times performing on cruise control. When Larroquette "woke up" once or twice in his role as J. B. Biggley, as he did in "Grand Old Ivy," he was quite charming, with both him and Radcliffe performing brilliantly. Unfortunately, director/choreographer Rob Ashford could not leave a good thing alone, bringing a whole chorus of football players to dance along, wiping away one the few enchanting character encounters.

Most of the other cast members are quite excellent, particularly Ellen Harvey as Biggley's executive secretary, Miss Jones, Mary Faber as Smitty, and, although a little young for the role, Rose Hemingway (at 27 she seems more a neophyte than Radcliffe). Christopher Hanke makes the nasty Bud Frump almost likeable. And, although her humor switched on and off at times, Tammy Blanchard is basically an hilarious Hedy LaRue.

Perhaps the most serious problem about this revival is that, despite its obvious satirical intentions, the work seems extraordinarily outdated and unnecessarily coy today. For those who have never seen the musical, I'll briefly relay the plot: window washer J. Pierrepont Finch, enters the executive suites of the World Wide Wicket Corporation in search of a job, armed with a little book that promises immediate success, How to Succeed in Business without Really Trying. Within minutes he has literally bumped into the president of company, J. B. Biggley, encountered a woman, Rosemary Pilkington, who falls in love with him at first sight, and captures a job in the mailing room by transforming the unpleasant encounter with Biggley into what the employment head interprets as a friendship.

Finch is highly likeable, even charming, but he is without a single moral principle in his desire to rise up the corporate ladder, and within hours, so it seems, he shifts into the positions of a junior executive, advertising manager, and, even after a disastrous failure, is elected Chairman of the Board, all before you can say, ROSEMARY, the woman with whom, along the way, he has reluctantly fallen in love.

Biggley's nincompoop nephew, Budd Frump, tries his best throughout to trip up Finch, as the other executives, terrified by Ponty's swift rise in the company and fearing the discovery of their own ineptitudes, plot to destroy him; yet Finch (as he reminds everyone F-I-N-C-H) miraculously survives each battle, primarily because he is so self-centered that he fails to see the restless men on the prowl.

The most famous song of the musical is Finch's love song to himself, sung into a mirror of the men's room as he shaves:

Women in this male-dominated world are all secretaries, whom the males are reminded, should not be treated like toys—but nonetheless are. In today's world, it is clear that the efficient and trustworthy Miss Jones, the smart Smitty, and the quick-plotting Rosemary would be at the head of the World Wide Wicket Company instead of out bowling or wickedly spinning webs to find husbands. But in 1961...well, those gender lines were at the musical's satirical heart. Today the plot appears somewhat as a stale joke with little resonance.

For all that, I think the audience was willing to overlook the datedness of the piece if only the actors could come together and enjoy their own spoof. But time and again, it seemed, Radcliffe was not the only one grimacing. Everybody seemed to be playing it "the company way," refusing to get excited about anything. Two of the best dance numbers of Lambert and Fosse's original, "Coffee Break," (such a difficult number that the movie dropped it), and the sprightly "A Secretary Is Not a Toy," seemed lackluster in Ashford's staging, while at other times, as I mentioned, the director seemed to suck all the attention away from the actors through the introduction of gratuitous routines.

Finally, despite Radcliffe's pluck and elfin charm, I kept missing the puckish comedy of Robert Morse, the silly imperiousness of Rudy Vallee, and the jazz inflections of Michele Lee's voice.

One piece, alone, came to life and created for its few minutes the magic that might have stood as a beacon to these young performers. The last full number of the musical, "Brotherhood of Man," was so richly sung, punctuated by Ellen Harvey's coloratora soprano, and so thrillingly danced that it almost redeemed everything else. If only the cast might have realized that "brotherhood" earlier in the show, How to Succeed might have gone straight to the top!

In the end, however, it didn't matter. The young girls and their families stood up in celebration and absolutely roared (I've never heard as loud of an applause) as Radcliffe bowed appreciatively to his fans.