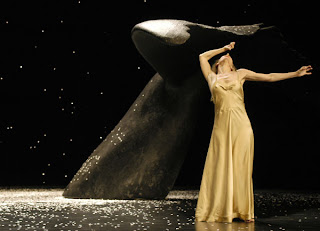 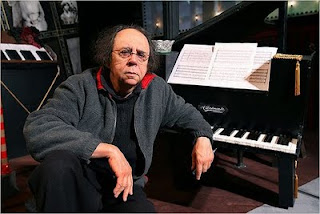 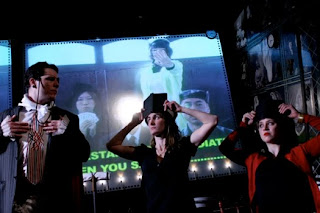 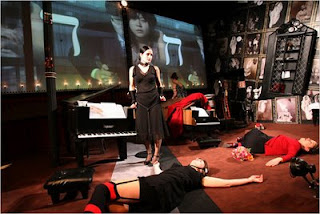 YOU KNOW WHAT I MEAN
by Douglas Messerli

Pina Bausch’s Tanztheater’s “Ten Chi,” begins promisingly enough, the stage featuring a sculptural conception of what appears to be a frozen whale or, at least, a whale frozen in space half in and half out of white ocean. For the first half of the work, Bausch’s dancers alternate with graceful lifts—in which the women performers such as Azusa Seyama, held parallel to the stage, appear to swim along with the whale—and dreamlike movements and verbal skits, including Metchild Grossman’s comic query of the front-row audience members whether or not they snore. The alternating currents of water-and-wave-like movements and the dream-like occurrences—including a shower of seemingly never-ending snow—create what appears to be a significant context for Chi, the metaphysical life forces which are promised as “exercises” in the second act.

Yet gradually, what might have been interwoven into a moving testament to contrary cultural experiences increasingly comes to be represented in cabaret-like sketches: the usurpation of a corner of woman’s dress as a male’s napkin, a man cavorting in a long evening gown. And differing cultural experiences grow into more like “Saturday Night Live” satires of Japanese stereotypes: a woman teaches others how to properly bow, another gives a rendering of standardized Western images of Japan through a comic extension of the consonants of words such as Mount Fuji, samurai, sushi, etc. Another skit satirizes the Japanese love of the camera; as on-line reviewer Paul Ben-Itzak commented on The Dance Insider: “Do we really need another comic riff on the snapshot-crazy Japanese…?” A dancer of Asian heritage attempts to tell the audience they are now free to leave since the performance is over; as the audience remains frozen in place, she repeatedly returns, with Geisha-like graciousness, to convey the seriousness of her statements: “Oh, I so sorry, very sorry. I understand,” she reports, “you think I joking with you, you think when I say you may go now, I am really saying you should stay…”—and in other words to that effect.

Instead of gradually attempting to unveil the mysteries of the life-forces of things, Bausch’s dancers turn what began as a cultural exchange on its head, ultimately reverting to all things European rather than Asian. Finally, as these skits gasp into increasingly unfunny comic routines and movements (a dancer punching a miked pillow, three men with Eraserhead hair dancing steps similar to those of street-dancing and hip-hop) the entire performance seems to collapse. Almost as if to redeem the utterly disconnected movements of “Chi,” Bausch pulls out the stops, forcing her talented company, one by one, to repeatedly run from every corner of the stage and nearby doors as they dance a maddened frenzy of athletic (and one must admit, often quite joyfully engaging) movements. Perhaps that is enough: certainly the audience at UCLA’s Royce Hall thought it sufficient to give a long and rousing ovation, not one of the usually hurried California audience members dashing from the theater to claim his car!

What most irritated me about Bausch’s (and her dancer’s work, since her theater is a collaborative affair) was that while the work suggested it might attend to one of the most substantial differences between the East and West, focusing on the Asian idea that each thing in the world has its own energy and life-force, “Ten Chi” seemed to indicate that any “superficial differences” the cultures experience are merely something at which to laugh: what we know, they know, and any seeming incomprehension is unimportant.

Perhaps Bausch might have done well to attend the premier, as I did, of Richard Foreman’s stunningly complex new play, Deep Trance Behavior in Potatoland. Foreman also works closely with his company in creating the work. But as in his many previous plays, what may seem funny or what might have been transformed to shtick instead becomes representative of the profound differences between all of us, between what you mean by enacting any of the thousand of ritualistic movements you daily employ and those I enact.

Working, like Bausch, through a grant from Japan (and, in this case, England) Foreman this time around incorporated film along with the myriad of ritualistic actions of his on-stage cast. While his actors engage in rites that readily mix the proceedings of a Masonic meeting with those of a highly traditional Jewish ceremony, a troupe of piano playing magicians with the bizarre visions of mediums in mid-séance (a number of the images from the Metropolitan Museum of Art show “The Imperfect Medium [a show I reviewed in My Year 2005] line the walls of the stage set), the figures upon screen take us through equally obscure rituals of behavior in Japanese and English schools.

Just as Bausch’s title suggests an engagement with Japanese culture, so too does Foreman’s film, beginning with its first image: the words “GO TO JAPAN.” Indeed, throughout the film we are engaged with various scenes from Japan and England; yet while the Japanese speak English, the English girls say very little and do a great many strange things. At one point the English women all wear paper hats, another English girl wears an eyepatch, several girls pretend to sneeze, “Kachoo.” At one point a male voice sings “Me and my shadow,” while the words on screen proclaim: “English people are afraid.”

The English-speaking Japanese figures, however, are even more perplexing. Again and again, in heavy and occasionally almost impenetrable Japanese accents, the students of Japan proclaim their ability to be understood by the New York audience:

Japanese Man: “you understand me immediately when I say, everything is a
Reminding. Knock, knock, knock

A short while later:

Japanese Woman: “I understand you immediately when I say”
(in letters) “resonance inside this…..
…..personal belief system”

Japanese Man: “I understand immediately when you say I too”

A short time after that:

Japanese boy: “you understand me immediately when I say this real speaking, i.e.
What, not what.”

Japanese girl: “I understand you immediately, when I say tick tock. I am here, tick
Tock. Proof. Tick Tock.”

Time and again in Foreman’s world, while we do somewhat comprehend or we get glimmers, at least, of meaning, we very much do not understand what the other precisely means; we recognize that we are leaping to conclusions, desperately attempting to link words and acts that, in truth, do not provide easy access.

But while we may often laugh or smile at those nearly incomprehensible words and acts, at no time do we perceive these as anything but serious attempts to communicate arising from real—if private or hermetic—systems of belief. Foreman’s scenes are not skits, but references to the impossibility of truly connecting, as the film says, what’s on the screen and what’s on the stage (at one point a male voice declares: “No relationship exists between what happens on stage and what is happening on the illuminated screen….”). Yet any intelligent playgoer/filmgoer can only try to link things, a phenomenon Foreman clearly celebrates: “No relationship exists…but suddenly click….and a profound relationship does now exist click.”

Rather than the kind of superficial internationalism given voice in Bausch’s work, Foreman’s complex interweaving of American, English, and Japanese experiences reveals the wonderful element of the unknowable, that which even as we attempt to comprehend, remains inscrutable—the hidden relationships of culture and self. As the words on his screen indicate:

ONLY BEING
A TOURIST
CAN ONE
EXPERIENCE
A PLACE

—words which might be easily morphed into another aphorism: “Only being a tourist can one experience another.”

Instead of laughing at cultural or personal differences, all those immutable separations between one another, Foreman encompasses them, joyfully celebrating these differences while enjoining us still to attempt the connect: click! –Not the sound of a camera, in this case, but of the mind coming to terms with the world about.