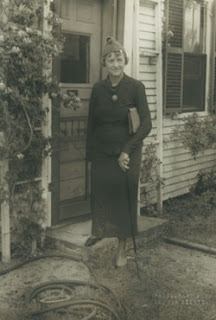 The stage represents a studio, used as living and dining room in an upper story, Washington Square South. Through an immense north window in the back watt appear tree tops and the upper part of the Washington Arch. Beyond it you look up Fifth Avenue. There are rugs, bookcases, a divan. Near the window is a big table, loaded at one end with serious-looking books and austere scientific periodicals. At the other end are architects drawings, blue prints, dividing compasses, square, ruler, etc. There is a door in each side wall. Near the one to the spectator's right stands a costumer with hats and coats, masculine and feminine. There is a breakfast table set for three, but only two seated at it—namely Henrietta and Stephen Brewster. As the curtains withdraw Stew pushes back his coffee cup and sits dejected.

______________
Born in 1876, Susan Glaspell was a founding member of the Provincetown Players, and arranged the first reading of Eugene O'Neill's work at the theater. Born in Davenport, Iowa, Glaspell was educated at Drake University in Des Moines, and attended one semester at the University of Chicago. While in Chicago she became involved with some writers of the Chicago Renaissance.

In 1900, working for a Des Moines newspaper, she covered the trial of John Hossack, which would later result in the plays A Jury of Her Peers and Trifles (reprinted at the USTheater site).

Returning to Davenport, Glaspell began writing fiction, winning several awards for her short stories, published in journals such as Harper's, The Ladies' Journal, and The Women's Home Companion. She soon met classics professor, novelist, poet and farmer George Cram Cook, with who she eventually moved to New York and Provincetown, Massachusetts. They married soon after. Cram encouraged Glaspell to write drama, and coauthored the play above, her first theatrical attempt.

Among the other plays she wrote for the Provincetown Players were Inheritors and The Verge, but the couple's survival depended mostly on royalties for her stories.

In 1922, Glaspell gave up her theater career to travel with her husband to Delphi, Greece. While doing research there, Cram contracted typhus and became too sick to be moved to Athens, dying on January 14, 1924.

Returning to Cape Cod, Glaspell wrote a biography of her husband, The Road to the Temple, and continued her theatrical writing, including Alison's House, for which she was awarded a Pulitzer Prize. She also wrote novels.

After a break up with the younger writer Norman Matson, she struggled with poor health and alcoholism, becoming for a brief time the Midwest director of the Federal Theater Project, during which time she stopped drinking and returned to health.

Glaspell continued to write fiction through the late 1930s and into the 1940s. She died in Provincetown in 1948.

For a number of years, Glaspell's considerable literary contributions were forgotten, and most of her fiction remains out of print even today. But with the rise of feminism, several of her plays have been revived.

Posted by Douglas Messerli at 2:26 PM