Kier Peters A DOG TRIES TO KISS THE SKY 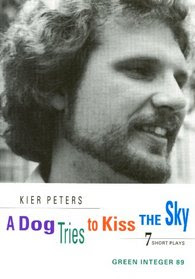 [Two men against the sky]

ALBERT: Far in the distance.

ALBERT: [Cocking his head] Then you hear him?

ALBERT: Then you don't.

BOB: I can hear a train.

BOB: In the distance—there—the whistle.

ALBERT: No train in this part of the state.

BOB: I mean the whistle.

ALBERT: It's a bark.

BOB: What you hear is—evidently. But I'm hearing a whistle—
like the whistle of an engine—of a train.

ALBERT: But that's what it is.

BOB: You've heard this all before?

BOB: In the distance?

BOB: And it never comes closer?

BOB: And you never move closer to it—to him?

ALBERT: What should I want?

BOB: To find out if it really is a dog.

ALBERT: Oh it's a dog alright.

BOB: Or why he barks or why he howls.

BOB: Maybe it would help.

BOB: The dog. Maybe it's lonely.

BOB: Maybe he's hurt. You could help him.

ALBERT: Then I wish you'd hear him too. You could go out
and save him or shut him up.

BOB: I don't hear anything.

ALBERT: [Shouting] You could go and shut him up.

ALBERT: Do you read lips?

ALBERT: How do you know what I'm saying then?

ALBERT: Then you shouldn't say so.

BOB: I didn't. It was just a figure of speech.

ALBERT: Well do you hear him or don't you?

ALBERT: Well, you're one of the few people who do.

ALBERT: Hear me. Most people turn away.

BOB: Why should they do that?

ALBERT: Because they can't hear.

BOB: You mean the dog?

ALBERT: The dog. And then me, when they turn away.

ALBERT: No. They just doubt.

ALBERT: I know, you doubt me too.

BOB: It's natural. I mean, when one's hearing is perfectly
normal—if not exceptional, which is what most people think
perfectly normal is all about—and you hear something
someone can't it's natural to doubt that you're really hearing
this exceptional thing each and every day.

ALBERT: No, they don't doubt me. They doubt the dog.

BOB: Well they may say they doubt the dog, but it's you—your hearing it that is—that's really behind what they say.

BOB: They don't doubt your existence, just your ability to hear.

ALBERT: Doubt my existence, after they all turn away. It's like I
never existed. Just like the dog. And they certainly no
longer hear—if they formerly did—what I have to say
about anything—the dog, the weather, the time of day. So
after all I go off and stay in a little corner of town where
no one ever goes much. And I think to myself.

BOB: What is it you think?

ALBERT: I told you, I think he's being beat.

BOB: I mean, what is it you think to yourself?

ALBERT: Oh, like whether or not he's being beat. Or if he deserved
it. Or if he's going to stop. Or if I should take a gun
and go over to wherever it is he's howling from.

ALBERT: That's what I said.

ALBERT: [Pondering it for a moment] They bark. And howl.

BOB: Well I know some who don't. Most don't howl. And some don't bark much.

ALBERT: Only takes one.

BOB: Do you hear other dogs?

ALBERT: Of course! All around town.

ALBERT: Then why do you expect me to. I'm no better than you up
close. When they bark most everyone hears. And that's
why they get shut up! But this -- he's different. No one
hears him -- so it appears -- but me. So no one -- except
maybe the man who beats him—cares whether he howls or not.
BOB: Does he ever stop?

ALBERT: [Looking with disbelief] Of course! He's gotta sleep. He's
gotta eat. I live my life around those few hours. When he
sleeps, I sleep. When he eats, I take a quick bite. And once in a while, for a whole day, he sulks. And I perk up
and behave—according to the folks hereabouts—like a
normal human being. I live in fear of those days. Get all
on edge. It's almost a relief when he goes into his yaps
again.

BOB: Have you seen a doctor?

ALBERT: [Pointing in the direction of the hotel] He's right over there.

BOB: No I mean, have you gone to one?

ALBERT: He's the only one.

BOB: Have you gone to him then?

BOB: Well, perhaps he could give you something.

BOB: I mean for your nerves.

ALBERT: My nerves? I'm not nervous.
It's you who's nervous. It's the other folks.
Nervous about me and about the dog who they can't
hear.

ALBERT: What do you think I've been telling you? Of course I
mind it! I detest it! I want to kill the mangy hound.
But that has nothing to do with nerves at all.

BOB: It'd sure make me nervous.

ALBERT: What's there to be nervous about? He won't come any
closer.

BOB: I mean the constant noise.

ALBERT: There's always lots of noise. There are clouds and the corn, and naturally the people.

BOB: Well, the people yes! But the corn? You mean the wind in the
corn.

BOB: I don't think most people hear that either.

ALBERT: Some do. I met a man once who said he could tell you just from careful listening whether it was June or July in a field of corn. In June the corn just squeals, while in
July it crackles like a blanket on a dry hot night. Someone once explained to me the difference between a cumulus and a stratus cloud. A cumulus got a high-pitched little effeminate voice that stutters to the stars, while a stratus got a flat uninflected pitch like a Midway carney Kansasan crying "Come on come on come on in." But no one hears this dog.

BOB: I don't know what else to suggest. Have you ever thought of
moving away?

ALBERT: This is where I live.

BOB: I know. But there are lots of other wonderful places to live
in. Without dogs in the distance.

ALBERT: I don't think so!

ALBERT: Besides, it might be worse. Another dog might growl or drool or hiss. And I'd miss him.

BOB: I think you've got a problem!

ALBERT: That's what I've been telling you.

BOB: [Turning away] What was that?

ALBERT: I know, it's time for you to go. They all eventually turn away.

BOB: I mean that noise?

ALBERT: [Cocking his head] That's him!

BOB: He sounds so sad.

ALBERT: You think so?

BOB: Sort of silly. Like he's lolling on the lawn with tongue
hanging out.

BOB: Sort of gurgling low in his throat. Growling now. Hear him?

ALBERT: [Cocking his head] Not my dog.

ALBERT: Nope. Mine barks. Mine howls.

ALBERT: Mine hasn't let up.

BOB: Mine has put his head down beside his bowl to drowse.

ALBERT: My dog—the way he howls sounds almost as if he was the trying the kiss the sky. Like he was in love with that old cumulus queer.

BOB: I think you've got a great imagination.

ALBERT: You were the one just making it up!

BOB: Yes. But I was trying to show you what you say seems like to others.

ALBERT: That's the problem. They don't got good ears.

[In the distance a dog barks, howls.]

Kier Peters is the dramatic pseudonym of Douglas Messerli, the publisher of Green Integer and, formerly, Sun & Moon Press. Messerli has published numerous works of poetry, fiction, drama, and an ongoing series of annual cultural memories, titled My Year____. A Dog Tries to Kiss the Sky has been performed in Los Angeles (by Bottoms Dream and Theatre of Note), San Francisco, and Sao Paulo, Brazil.

Posted by Douglas Messerli at 10:10 AM