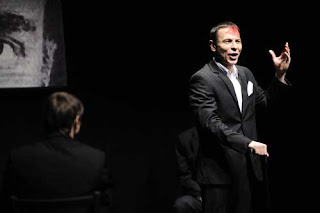 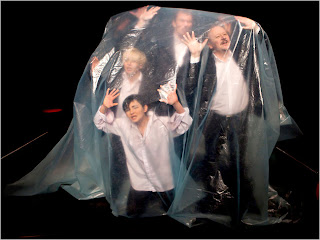 The moment I left the production of Jerusalem, I caught a taxi downtown to the East 4th Street La MaMa theatre. I was looking forward to seeing the highly respected Belarus Free Theatre's Being Harold Pinter, in part because I am a great admirer of Pinter, but also because I feel a great sympathy with a theater company that speaks out about political issues, a company who currently cannot return to its homeland.

I should have realized that this production would also show a great deal of blood, from the very first moment of the work when Pinter writes in his memoirs about falling on the street, the actors holding up bloody hands as evidence, straight through to a gripping series of confrontations between prisoners and prison guards.

This production, which begins by speaking of Pinter's method of creating characters, uses the playwright—himself an increasingly politicized figure as he aged—as a kind of lightning rod with whom and against whom they play out their various notions of what makes theater political, or, in their eyes, something of value.

They begin with the openness with which Pinter creates his figures, first setting them off from each other as alphabetical numbers which, as they react to one other, grow ultimately into full-grown characters. The company is intent, it appears, upon revealing the domestic violence of Pinter's figures, displaying their relationships and language alongside their own renditions of absurd prison interviews and punishments by officials and guards.

Certainly anyone who knows Pinter's plays well, along with his later critical writings and his Nobel Price acceptance speech, will realize that this playwright is a political figure, and his plays, while sometimes moving into more and more abstract territory, became increasingly insistent about the nature of human torture and suffering. Using scenes from "Mountain Language," "One for the Road," and "Ashes to Ashes," the group helps the audience to perceive just how similar and, yet, how different Pinter is from the company's own presentation of Abu Ghraib-like stories of life in Belarus prisons. "Ashes to Ashes," in particular, points up Pinter's use of a dialogue between a jealous lover and a woman who is haunted by torturous memories that may never have happened.

Yet there is a sense among these actors, also, that what they love in Pinter is something they will rarely be able to reach, for they are out to present political realities, no matter how absurd the situations may be, while Pinter is far more interested in human relationships for good or bad. His characters often seem to torture one another less for what they see as mistaken ideas and actions as they do for the simple joy of it.

Particularly when these Belarusians performed scenes from Pinter's earlier play, The Homecoming, the group somehow got it all wrong. Yes, as they point out, the play begins with a hostile conversation between a father and a son, but the heavily brooding way in which they performed it is not, thank heaven, a standard reading. Often behind the hate expressed in Pinter's interrelations is an enormous among of wit, a dark humor which cloaks and confuses the meaning, allowing us to see new aspects of each character's personality. In Pinter there is no simple good or bad. We may be morally disgusted by both Max and Lenny, but to be so we have also to give both their due; we have to recognize the fabulous energy behind their never-ending duels and laugh at the absurdity of life.

The Belarus free theater performers—Nikolai Khalezin, Pavel Gorodnitski, Yana Rusakevich, Oleg Sidorchik, Irina Yarshevich, Denis Tarasenka, and Marina Yurevich—are all very serious minded, which, given the difficulty of their artistic lives, is completely understandable. But Pinter, even as they admit, is not truly what their theater is all about. The prison scenes they play out may be equally absurd, the characters using language as a torturous device to break down the individual will, but there is little wit and joy behind it, and we recognize in that difference why political theater is often so predictable. The company was brilliant in its performances of those political scenes, and the substance of their criticism truly moved me. But then I have seen that play over and over again in the pages of newspapers and books of history, whereas each time I have seen a play by Harold Pinter it is as if I am discovering it for the first time.