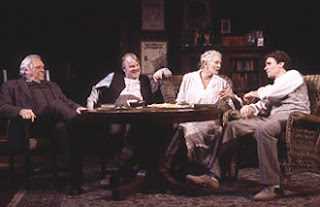 IN CONTROL
by Douglas Messerli

Unable to travel to New York to see the production of Long Day’s Journey into Night starring Vanessa Redgrave, I determined to reread the play. It had been a long time since my last reading, and I had forgotten how specific O’Neill is in most of his plays—and particularly in this one—with regard to the description of scene, and of characters and their actions. One does not usually encounter such lengthy—one might say exhaustive—descriptions. I often trim my comments to the minimum in my own plays, presuming that any director worth his or her salt would interpret the setting and movement of the actors in his or her own way. There is almost a sense of O’Neill attempting to recreate his actual family members on stage.

At the same time, the specificity of O’Neill’s descriptions (this, for example from his description early in the play of Mary Tyrone: “What strikes one immediately is her extreme nervousness. Her hands are never still. They were once beautiful hands, with long, tapering fingers, but rheumatism has knotted the joints and warped the fingers, so that now they have an ugly crippled look. One avoids looking at them….”) reminded me of the appropriateness of the acting in the movie version with Katherine Hepburn, Ralph Richardson and Jason Robards, Jr. I know that many feel that Hepburn’s performance of the “dear drugged mother” was, so to speak, “over the top.” But I have only to recall how she stroked her long, gnarled fingers to feel how precise was that performance—one I recall as the most brilliant of her career. I wish I had been able to see Redgrave’s interpretation, if only to free me from imagining Mary Tyrone as Katherine Hepburn. Or, for that matter, to free me from conjuring up Ralph Richardson’s golden trumpet of a voice in every word of James Tyrone and of hearing the cynical, side-mouthed sentences of Robard’s version of James Tyrone, Jr., the often drunken Jaimie.

I almost always forget the name of the actor who played Edmund, not because Dean Stockwell did not play him well, but because of the triumvirate of remarkable performers, Hepburn-Richardson-Robards, hardly give him any room. And, although I have heard that Robert Sean Leonard’s recent stage performance brought new dimension to the role of Edmund, I have always presumed—and did so through my newest reading of the play—that, in part, he was a less defined character because O’Neill had made him so. He was weaker than the others precisely because he was weak, was in ill health. And in the hothouse environment of the three raving,lunatic ghosts, he was an outsider, a figure standing apart. They—the unholy trio—are in control of the show.

And it is a show, a spectacle they are presenting for the young Hamlet-like prince; their representation of each other and themselves. Because he is so clearly a repre¬sentative to them of the potentialities of the future—as consumptive as that future may be—they all adore him, and, because they are doomed not to participate in that future, they hate him as well. He represents all their hopes and all their fears, and, accordingly each member of this addicted family reach out to love him and to corrupt him, offering—at a time when he is clearly ill and visibly weak—the temptation of something to drink.

The year, we are told, is 1912, the end of a golden age that with the rise of World War I will end the significance of their generation and will irreparably change American culture. One must also remember that, although all four characters of O’Neill’s family tragedy are ill (Mary, as we have mentioned, is an incurable morphine addict; James has destroyed his life and career through his petty greed, refusing to chance any role other than the romantic drama that has made him popular; and Jamie is a determined drunk), Edmund, diagnosed in the course of the play as
having tuberculosis, is the only one with any significant chance of being cured; the others are all doomed. Mary names the problem quite straightforwardly when her husband demands that she forget the past:

Given this situation, I have now come to realize that, far from being the weak link of this family, Edmund is nearly completely in control. And the family’s long slide into the unbearable night of their lives is orchestrated by Edmund’s actions and statements, most particularly his aloofness, his seeming noninvolvement. He is their audience, and in this sense—as the receiver and recorder of their lives—he is their only salvation, is the only one who has the potential to present them—to represent them—to the future, and in so doing possibly redeem the lives they have squandered.

It is perhaps for this reason that O’Neill is so exactingly particular in his dramatic instructions. As the playwright he also must be in complete control. For without his precise recreation of them, the characters would be only so much silent matter, the lives merely forgotten histories among the millions of such American self-destructions. Edmund/O’Neill allows them to haunt the American imagination, helps to rediscover the spirituality that Mary sought.

Posted by Douglas Messerli at 7:49 AM