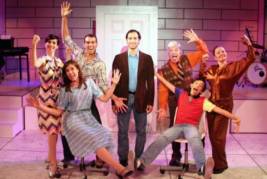 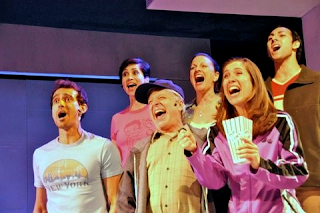 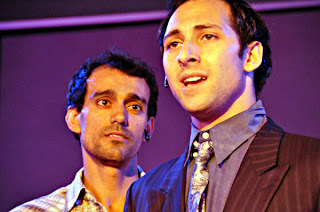 
There have been numerous revivals of William Finn’s operetta-like musical since its long 1992 run on Broadway (487 performances). Unlike most American musicals, Finn’s work, broken into two parts—March of the Falsettos and Falsettoland—has basically no spoken words, the story being told through the music and lyrics.

Finn’s story, of the late 1970s and early 1980s in New York is almost a textbook of social issues and expression of correct attitudes towards its two major focuses, American Jews and gays, and for that reason the story was highly appreciated by its audiences (including the performance I attended) and, with its further introduction of AIDS, along with the difficulties the characters face with marital relationships—a young son being very much at the center of this work—it elicited more than its share of empathy resulting in tears (falling even from own eyes).


The work begins with the main character, Marvin (Jesse Einstein), his son Jason (the talented young Major Curda), his psychiatrist Mendel (Chip Phillips) and his lover, Whizzer (Richard Hellstern) singing “Four Jews In a Room Bitching,” a piece laying out the difficulties each are facing. Marvin has left his wife, Trina (Lani Shipman) for Whizzer, but continues to insist upon  a “tight-knit family,” demanding that both he and Whizzer continue to play an important role in Jason’s life.


For her part, Trina is obviously hurt by the series of events, but still attempts to create a conciliatory relationship with her for husband and boyfriend. A trip to the psychiatrist, Mendel, however creates a new series of events, as Mendel, singing “Love Is Blind,” attempts to help her while at the same time falling in love. When Mendel demands to know more about Marvin’s relationship with Whizzer, in “Marvin at the Psychiatrist, a Three-Part Mini-Opera” Marvin details his relationship with Whizzer, concluding that he is in love with him, Mendel moving the conversation to Trina’s bedroom habits, as Marvin and Jason reply in counterpoint.


Jason, in turns out, is having his own difficulties, wondering whether his father’s homosexuality can be inherited (“My Father’s a Homo”).  Whizzer suggests that Jason also visit Mendel, who now is in what might be described as personal relationships with the entire family.

Meanwhile, tension is building between Marvin and Whizzer, as the former attempts to put Whizzer in the position of homemaker. At the same time, Trina is increasingly feeling alienated by the situation, growing fearful that she is becoming less and less prominent in her family’s life (“I’m Breaking Down). A visit from the psychiatrist for dinner and therapy results in further involvement between Mendel and Trina, and before long he has made a marriage proposal to Trina.


Trina has mixed feelings which she expresses in “Trina’s Song,” but she realizes that Mendel’s love is sincere, and, in need of support, she realizes she could do worse. The men, all realizing their failures, together sing “The March of the Falsettos,” admitting that their roles as “masculine” examples represent a great deal of bluff.


Trina and Mendel announce their marriage plans, and Marvin reacts with anger, violently slapping his ex-wife, both painfully singing “I Never Wanted to Love You,” a sentiment Whizzer repeats to Marvin, and Marvin relays even to his innocent son.


By the end of the first part, Marvin has broken with Whizzer and created a gap between him and Trina. Attempting to salvage his connections with his son, he sings “Father to Son,” reassuring Jason that he will love always love him, however he turns out.


If the first part has been almost brittle with the dilemmas Finn presents us with, the second part is even more distressing. It is now 1981, two years later. The cast has now grown by two others, lesbian neighbors of Marvin, Dr. Charlotte, an internist, and Cordelia, a kosher caterer. These two women offer support and love to the lonely Marvin, but create new problems of their own.


Although Marvin has grown wiser (“About Time” being a song about growing up and getting over his selfish behavior), and has managed to retain a close relationship with Jason, the issue of his son’s Bar Mitzvah creates new tensions between Trina and him, she attempting to plan a large event, while Mendel (and Jason) encourage a more simple party. Caught in the middle, Jason is furious with both parents, which Mendel assures him is absolutely natural (“Everyone Hates His Parents").


Both parents, Cordelia and Dr. Charlotte attend a baseball game in which Jason is playing, and in “The Ball Game,” all make fun of themselves of watching Jewish boys “who can’t play baseball,” and getting caught up in the event. To everyone’s surprise, Whizzer shows up—invited by Jason—which creates new tensions and reveals to Marvin just how much he has missed him.


In the midst of these adult dilemmas, Jason somehow manages to hit the ball, but is so nonplussed that he forgets to run!


Another “falsetto” piece relates their new traumas. And soon after Marvin and Whizzer return to their relationship. The war between Trina and Marvin, however, continues, until suddenly, in a racquetball game, Whizzer collaspses, and is taken to the hospital. Dr. Charlotte has already warned us through song that “Something Bad Is Happening,” young men increasingly becoming ill and dying. And we soon discover that Whizzer has AIDS.


In the trauma of the new situation, both parents offer Jason the option of “Canceling the Bar Mitzvah,” while all four of the gay figures, Marvin, Whizzer, Charlotte and Cordelia musically muse on how their love can last, “Unlikely Lovers.”


As Whizzer’s condition worsens, Marvin turns to God, singing—a bit like Tevye in Fiddler on the Roof—“Miracle of Judaism.” Suddenly all break into Whizzer’s hospital room, Jason having decided that the Bar Mitzvah should be celebrated there, with Cordelia catering the event. For a few happy moments, “The Bar Mitzvah,” lifts everyone’s spirits, but suddenly Whizzer can no longer continue in their company, and is wheeled from the celebrations.


Left alone, Marvin sings his major love song of the work, “What Would I Do If You Had Not Been My Friend?” a piece which might melt away all the icebergs in Greenland, as we hear  the news that Whizzer has died.


Marvin and his friends surround him to bid the audience farewell without another round of “Falsettoland.”


Finn’s work is, as I mention above, often touching and certainly affecting. The audience with whom I saw the production, clearly loved the work. But the constant stereotypes of both Jewish and gay issues the musical presents often transform it from a serious dialogue of its concerns into a kind a saccharine and even sanctimonious affair. At their best the lyrics remind one of Stephen Sondheim, with their cleverly satiric purposefulness, but just as often they can’t hold up the significance they attempt to portray, and the music—never reaching the heights of Sondheim in works such as Follies, Merrily We Roll Along (which is closest in spirit to Finn’s work) or Sweeney Todd—seem all to be of one piece without creating the variance of sound and structure that would lend the musical a richer sheen.


The cast I saw were all quite capable, at moments even wondrous, with the small musical combo on stage creating a feeling of a much larger cast than the work actually entails. Their acting also created a sense of absolute delight. So what, it’s not a perfect work? It certainly is worth a visit to the theater any night.


The performance I saw the other day of William Finn’s and James Lapine’s operatic musical about the AID’s era dramatic drama, Falsettos, which I reviewed on HDBroadway streaming, was perhaps a far better rendition of the work that I saw in 2011 at the small theater in Los Angeles. With a wonderful set which literally demonstrated the breakdown of family life through a re-assimilation of the constantly changing reconstruction of the break-down moveable household constitutions of family life: chairs, tables, shelves, and even beds. This is a world in total flux, as the opera itself proclaims.
No wonder the young child Jason (Anthony Rosenthal in the 2016 revival production at the Walter Kerr Theatre I just saw) is confused. Since his father (Andrew Rannells) has suddenly run off with a gay lover (Christian Borle), he can only wonder whether he himself is also gay. His mother, Trina (Stephanie J. Block) is confused as well, with the lesbian neighbors, Dr. Charlotte (Tracie Thoms) and Cordelia (Betsy Wolfe) equally confused about what is happening in the world they inhabit. There are no answers to what is happening, particularly when the gay lover Whizzer falls sick with the pandemic disease of the time—which another inert president, in this case Reagan—could not imagine how to respond.
This was a statement of a stalemate between politics and leadership that reflects such a flaring light on our own time, that I could hardly view it without endless tears.
Watching this film recreation, the other day, I realized, yet again, how significant this work is for our own time.

Posted by Douglas Messerli at 10:44 AM No comments: