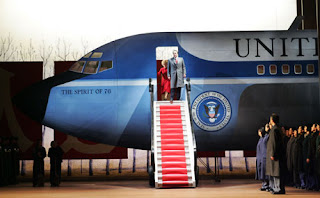 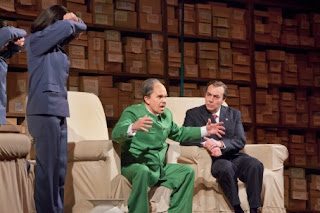 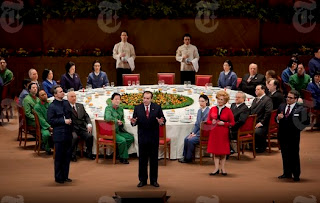 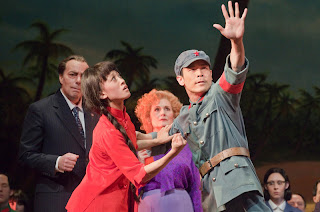 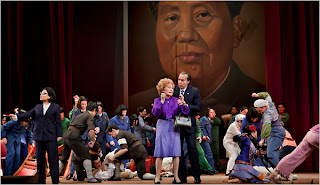 
Although most of the critics who I read (Mark Swed in the Los Angeles Times, Anthony Tommasini in The New York Times, and Anne Midgette of The Washington Post) agreed that the Met's new production of Nixon in China was excellent and long overdue, there was a sense between the three that the plot of the work was static and that one character, in particular, Henry Kissinger (sung by Richard Paul Fink) was a figure of parody whereas the others were treated more seriously. In a piece by Max Frankel, published in The New York Times a couple of days before the live HD airing, the former editor of the Times—who was with Nixon in China and won a Pulitzer Prize for covering the trip—squarely asked the question which the other reviewers only intimated:


...Why bother, as in Nixon, to lure us to a fictional
enterprise with contemporary characters and scenes
from an active memory bank? Why use actualities,
or the manufactured actualities of our television
screens and newspapers, to fuel the drama?


The answer, he feels, is "obvious but also treacherous," that the use of actual characters helps to "overcome the musty odor that inhabits many opera houses," drawing new audiences into the theater. But, Frankel continues, it brings other dangers with it:


The danger is that despite the verisimilitudes of text,
setting and costume, a viewer's grasp of events may
not match the fabric being woven onstage. What the
creators intend to be profundity may strike the knowing
as parody.


Most of the reviewers agreed that the composer, writer, and director did give their figures a range of emotions, both serious and comic, and between acts, Winston Lord (of National Security) assured us that much of the talk between Nixon and Chairman Mao in the First Act was close to what actually was said in their meeting; but all also felt that the opera did move to a kind of parody in the Second Art performance of The Red Detachment of Women, in which Fink, the singer-actor who played Kissinger, also plays a lecherous, Simon Legree-like landowner who has stolen away a young maiden. Fink sings:

She was so hot
I was hard-put
To be polite.
When the first cut
—Come on you slut!—
Scored her brown skin
I started in,
Man upon hen!


Some characterized this scene as surreal and the last act as psychological, as if they were somehow different in tone from the more historicized events in the First Act.


If nothing else, there was a sense that Nixon in China, without a narrative arc, was a bit of a rocky ride. Certainly, at times, while always enjoying the shimmering glory of the music, I too felt that way while watching it. Yet now that I've pondered it for while, I believe I was mistaken, that, in fact, the opera is highly structured and fairly coherent in its tone and presentation of characters.


First of all, John Adams and Peter Sellars are never going to present something that works as a Verdi opera might. Although all may work with a complex weaving of historical events, Verdi's sense of drama is highly embedded in narrative, while Adams and team, postmodern in their approach, eschew what we might call "story."


Nixon in China has "events," but there are presented in a series of tableaux, not unlike some medieval musical productions. Each character gets the chance to reveal his or her selves. But what Alice Goodman, Adams and Sellars are interested in is not so much the outer faces they present to the world, but what these figures are thinking and imagining within. And I think they would have to admit that every figure on their stage is, in one way or another, a bit unhinged; these are, after all—with the exception perhaps of Pat Nixon—people desperate for power. And all are on the edge of insanity.


Even before we meet any of the major characters, the people of China speak in a strange manner that we comprehend is not quite rational thought, as they sing from the text of "The Three Main Rules of Discipline and Eight Points of Attention":

Prompt delivery directly to authorities of all items
confiscated from landlords.
Do not damage crops.
Do not take a single needle or piece of thread from the masses.
Pay for everything you damage.
etc.

As they chant, "The people are the heroes now," even if these "heroes" are highly manipulated and controlled.


Out of the sky drops the Nixons' Spirit of 76, and no sooner does the President descend the airstair, shaking the hand of Premier Chou En-lai, than he begins inwardly calculating the great results of this journey as the filming catches him just in time for the evening news broadcasts in the USA, he hilariously singing out his fascination with his own acts: "News! News! News!

News has a kind of mystery;
When I shook hands with Chou En-lai
On this bare field outside Peking
Just now, the whole world was listening

James Maddalena, who has now sung this role in hundreds of performances, is an amazing actor, who brings off those jowl-shaking absurdities quite brilliantly.


Nixon's and Kissinger's meeting with Premier Chou (Russell Braun) and Chairman Mao (Robert Brubaker) in the next scene is perhaps the most absurd of the entire opera, as the two powerful leaders speak in a series of alternating gnomic jokes, apothegms, and, in Nixon's case, simple American verbal blunders. As Mao becomes more and more incomprehensible ("Founders come first / Then profiteers") in sayings parroted by a wonderful trio of assistants, Nixon attempts his linguistic twists spun from what he believes the Chairman might be saying. It all reminds me, a bit, of the other Peter Seller's performance as the totally innocent and ignorant Chance in the film Being There, where he spouts meaningless sentences interpreted by others to be full of profound significance. Mao and Nixon, one a bit senile, the other humorless and often depressed, hit it off beautifully in their mindless chatter, while the more rational Kissinger proclaims to be unable to understand anything, and the Premier sits silently in sufferance.


What that meeting accomplished, an issue clearly of importance in this opera, is questionable. But surely we can feel, and, in Adams' delicious scoring, we can hear the growing friendliness of all figures as they swill down Mai-tai after Mai-tai with toast upon toast. Again, non-drinker Kissinger misses out on all the glorious insanity of the evening.


In Act II we get a chance to see Pat Nixon at the edge. She begins the morning, in fact, downing a couple of needed pills. Like Premier Chou she is in sufferance, and, although excited by the whole trip, she is also exhausted and, we feel, not at all comfortable. The most American of this opera's figures, she flaunts a bright red coat. Flawlessly played by Janis Kelly, Pat comes off as somewhat frail and slightly terrified being as she is rushed through a glass factory (where the workers award her a green elephant) and classrooms in which the students have clearly been told what to say and how to behave, before stopping by the Gate of Longevity and Goodwill, where she sings her touching and slightly pathetic paean to the world she loves:

This is prophetic! I foresee
A time will come when luxury
Dissolves into the atmosphere
Like a perfume, and everywhere
The simple virtues root and branch
And leaf and flower. And on that bench
There we’ll relax and taste the fruit
Of all our actions. Why regret
Life which is so much like a dream?


Yet the homespun images she spins out of her sense of momentary joy—lit-up farm porches, families sitting around the dinner table, church steeples, etc.—are right out of Norman Rockwell paintings and is just as absurd of a vision as are her husband's darker mumblings.


That evening's presentation of The Red Detachment of Women ballet, written by Chiang Ch'ing, Mao's wife—as she so shrilly reminds us later—is experienced by the now overwhelmed Nixons less as an objective performance—in reality the evening ended with enthusiastic praise by the President and First Lady—as from a psychological, inner viewpoint. It is clear that Nixon, as he suggests several times in the opera, admired Kissinger's mind, but he also mocked his ways and apparently disliked the man personally. Accordingly the Nixons both conjure up the evil landowner in their tired travelers' minds, to be, or, least, to look like Kissinger.* Like many an innocent theater-goer, the Nixons become so involved in the story of a poor girl who is saved and then destroyed by refusing to obey Communist doctrine that they confuse drama with reality, breaking into the action of the ballet itself to save and protect the young dancer.


Mark Morris, using some aspects of the original choreography, nicely stages his orderly squadrons of young military dancers against the chaos of events. This is perhaps the most difficult part of the opera, and I am still not sure whether or not it truly succeeds, but it is crucial to our witnessing the truly mad person behind Chiang Ch'ing (Kathleen Kim)—who in real life may have been responsible for hundreds of deaths and had, herself, erratic nerves and severe hypochondiasis—as she proclaims in the noted aria, "I am the wife of Mao Tse-tung," angrily declaring that all be determined by "the book." After Mao's death, we should recall, Chiang Ch'ing committed suicide.


After witnessing these six individuals'—Richard Nixon, Mao Tse-tung, Chou En-lai, Pat Nixon, Henry Kissinger, and Chiang Ch'ing—mental dramas, we can only breathlessly watch as they slip into sleep. Kissinger shacks up with one of Mao's translators before disappearing into the bathroom. The Nixons share their disappointments, the President for being misinterpreted by the newspapers, Pat silently suffering, with tearful eyes, from her husband's inattention and having herself to attend yet again to what may be his ritual recounting of an attack he endured in World War II. Mao also finds relief in the hands of one of his translators before threatening his wife for having made political mistakes, until he falls with her into a lustful embrace upon their bed. Chou En-lai, clearly already in pain from the bladder cancer which would kill him 4 years later, awakens early to return to his never-ending work, drawing a close to all the madness with the most profound question of the opera: "Was there any point to any of it?" The "it" may refer, obviously, to the Nixons' visit, but it also suggests another possibility of meaning: "Was there any point to all their madness, to their desperate struggles to hold onto any power they might have over others?" All ended their lives in disgrace and shame, except for Pat; but even she almost disappeared from the public eye after the death of her husband, suffering a serious stroke the same year that Chou En-lai died.


In some respects, I now wonder, despite its occasional comic elements and always lush sonority of sound, if this isn't one of the darkest of operas. But then, aren't the young and the old—represented by the US and China—usually at the heart of the tragic, Romeo and Lear?


Coincidentally, in my 1990 "opera for spoken voices," The Walls Come True (Los Angeles: Sun & Moon Press, 1995), I included Dr. Kissinger in my "Twelve Tyrants Between Acts: Mundane Moments and Insane Histories," based on the paranoia and ridiculous accusations he expressed in his Years of Upheaval (Boston: Little Brown, 1982) when, in 1973, he was in Hanoi attempting to negotiate the Paris Accords.

Posted by Douglas Messerli at 8:01 AM