Actor John Hurt's portrayal of Krapp in Beckett's 1958 play is absolutely brilliant, except for, perhaps, the near interminable pause before the actor begins speaking. The stark setting of the play, with a single spots of bright white light, gives a grand theatricality to Krapp's world, a world in which, under the light, he feels safe while being surrounded by darkness wherein, as Beckett himself described it, "Old Nick" or death awaits, a fact Hurt reiterates once or twice by daring, with some humor, to enter, momentarily, the surrounding darkness.


On his sixty-ninth birthday Krapp, yet again, forces himself to interact with a younger incarnation. It is clear that Krapp has a fixation with his former selves. For years he has recorded tapes describing his life's events, most of them quite meaningless, but some of them of great poetry and sensibility. The tape Krapp chooses on this particular, rainy night, is "Box 3, Spool 5," the day Krapp turned 39. 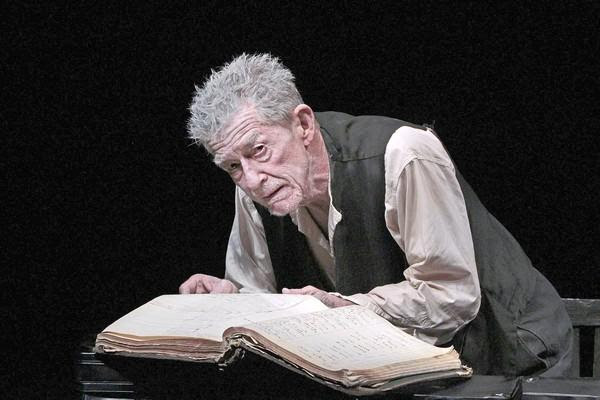 Yet director Michael Colgan reveals that what leads up to his playing the tape is as important in some senses as what is actually on the tape itself. The ritualistic acts, Krapp's continual checking of the time, his strange way of eating a banana—he puts the entire banana into his mouth holding it there for a while before biting it off, clearly a bow to the fruit's sexual suggestions—and several of his other actions, including his nearly falling on the banana peel he has tossed into the dark, reveal him as a kind of eccentric fool—in short, the typical Beckett figure. As his name suggests, he is "full of shit."


Hurt presents Krapp with a kind of valor despite his obvious distancing of himself from the human race. Clearly Krapp's mother has been a monster, living for years in a world of "vidiuity"—the condition of being or remaining a widow. The small things he describes are both comical and life-affirming: playing ball with a dog as his mother dies, awarding the ball to the dog as he hears of his mother's death; attending a vesper service as a child, falling off the pew.


Krapp is an everyday man with romantic aspirations, or at least he was, it is apparent, at age 39, the time when we are all have arrived in the prime of life. Krapp at 39 is both a smug bore,


Spiritually a year of profound gloom and indulgence until that
memorable night in March at the end of the jetty, in the
howling wind, never to be forgotten, when suddenly I saw the
whole thing. The vision, at last. This fancy is what I have chiefly
to record this evening, against the day when my work will be done
and perhaps no place left in my memory, warm or cold, for the
miracle that . . . (hesitates) . . . for the fire that set it alight.
What I suddenly saw then was this, that the belief I had been going
on all my life, namely—(Krapp switches off impatiently, winds tape
forward, switches on again)—


a man who will not regret any decision of his life, and is a man amazingly come alive through the love of a woman whom he describes lovingly in a scene where the two lay in a small punt as it floats into shore through the reeds.


The older Krapp, who realizes that his younger self could not imagine the loneliness and emptiness of the life ahead, has no patience at times with his past. His new tape, which he begins after impatiently winding the older tape ahead to escape his previous self's blindness, is filled with bitterness and anger for a failed life:


Nothing to say, not a squeak. What's a year now? The sour cud and
the iron stool. (Pause.) Reveled in the word spool. (With relish.)
Spooool! Happiest moment of the past half million. (Pause.) Seventeen
copies sold, of which eleven at trade price to free circulating libraries
beyond the seas. Getting known. (Pause.)


He has failed, obviously, even in his writing career. Unlike his younger self, so unregretful of his past, the old Krapp is filled with the detritus of his life, all those materials left over from his disintegration. If the younger Krapp declares himself as only moving forward, the elder would "Be again!"

Be again in the dingle on a Christmas Eve, gathering holly, the
red-berried. (Pause.) Be again on Croghan on a Sunday morning,
in the haze, with the bitch, stop and listen to the bells. (Pause.)
And so on. (Pause.) Be again, be again. (Pause.) All that old
misery. (Pause.) Once wasn't enough for you. (Pause.)
Lie down across her. He gives up this, his last tape (or perhaps simply his latest) to listen again to his former self describing his sexual moment with the woman in the punt.


Hurt so painfully suffers and loves his former self—at one moment even embracing the machine through his young speaks—that one can almost hear his heart crack.


Los Angeles, November 6, 2012
A slightly different version of this piece about the filmed version with Hurt was published in My International Cinema (Los Angeles: Green Integer, 2012).
Posted by greenintegerblog at 8:46 AM