Douglas Messerli | "A Dance of Death" (on Strauss' Salome)

A Dance of Death (On Strauss' Salome)
by Douglas Messserli 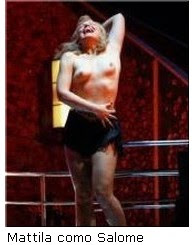 Howard and I attended the high definition live performance of Strauss's opera Salome in late 2008; but its appropriateness for inclusion in the 2002 volume became immediately apparent. This opera is, after all, almost an inverted paean to the subjects of love, death, and transfiguration—although no one in this work—except perhaps for the necrophilic Salomé—can be said to be in love or spiritually exalted at its end.

Strauss's libretto, based on Oscar Wilde's French play, is almost painful to endure, moreover, because of its characters' confusion of love with lust, death with power, and transfiguration with insanity. Each of its major characters is doomed from the outset by his or her perverse behavior through which each desperately strives to attain something that cannot be given.

The Syrian Captain of the Guard, Narraboth, desires the untouchable Salomé, destroying himself when he witnesses her mad acts.

Herodias, Herod Antipas's niece and the former wife of his brother, Herod Philip, has married her uncle/brother-in-law to the outrage of many in Judea, receiving widespread damnation by Jochanaan (John the Baptist), whom Herod has, accordingly, arrested and imprisoned. The historical Herodias also wanted power and ultimately forced her husband to demand he be named King of the Judea provinces which he controlled; but in Strauss's version she primarily seeks the restoration of her "good name."

The historical Herod also sought further power, but in the opera is seen primarily lusting after his sixteen-year-old daughter, willing to promise anything if she will reveal herself in her legendary "Dance of the Seven Veils."

Once Salomé has witnessed the man behind the outraged voice in the chambers below the great terrace to where she has escaped from the dinnertime leers of her father, she desires to sexually control the prophet, who emphatically rejects her.

Jochanaan obviously seeks his freedom, but is even more committed to the damnation and redemption of the entire family. If their desires emanate from the lusts of self and body, his stems from an equally perversely unforgiving faith.

In order that this unhappy family and guests might obtain what they desire, each also gives up something that will end in self-destruction. As I have already reported, Narraboth gives up his life. Herodias sacrifices her own daughter to her husband for the possibility of destroying Jochanaan, and, in so doing, further dooms her "good name." Herod will be forced to give up his protection of the holy man, Jochanaan, resulting in the wrath of the Sanhedrin and his Jewish subjects and perhaps in the loss of his kingdom (in fact, soon after John's and Christ's death, Herod Antipas was banished by Caligula to Gaul). Through her dance, Salomé gives up, symbolically speaking, her chastity, and through her murder of Jochanaan, loses her sanity and ultimately her life (the historical Salomé did not die, but was wedded to Herod Philip, her mother's former husband). For his faith, condemnations, and disdain of Salomé Jochanaan sacrifices his head.

Salomé's frenzied dance, accordingly, can be understood as a ghastly dance of death, an abandonment of all things honorable that love, faith, and freedom might represent. It is both a sexual tease and a prelude to the sexual frenzy she later plays out when she is served the head of Jochanaan on a platter. But it is not only Jochanaan's and her own death for which she dances, but for the end of her world, the destruction—so often symbolically sought (and occasionally accomplished) by the younger generation against the old—of her parents and their world.

The Metropolitan Opera productions on screen are almost as good as being at the opera itself, and the close-up perspective is perhaps even better than witnessing the stage in the cavernous space. In this particular production, however, the censors felt it necessary to save the "home" audiences from witnessing Karita Mattila's breasts. But given the limitations of her dance, performed in what The New York Times critic Anthony Tommasini aptly described as "Dietrichian drag," perhaps we were thoughtfully spared the spectacle. Although Mattila has a lovely face, and is able to vocally and physically convince the audience of her sexual energy, the very size of her body renders her performance to be more like that of an agile ox rather than a lithe teen. And it is hard to imagine Juha Uusitalo's Jochanaan as eliciting Salomé's intoxication with his eyes, lips, and hair. But then suspension of belief is often a requirement of opera productions, and the performances as a whole were riveting, particularly in Kim Begley's Herod and Ildkó Komlósi's Herodias.