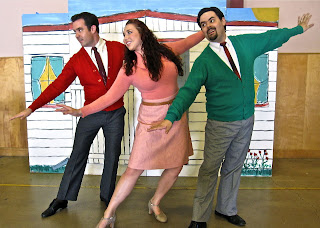 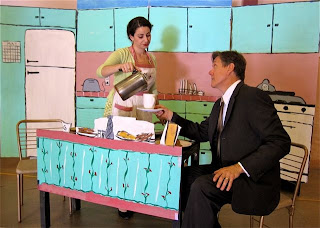 Leonard Bernstein Trouble in Tahiti / performed by the Pacific Opera Project, Santa Monica, California (the production I saw was on Sunday, April 15, 2012)


In early April 2012, my companion Howard heard on the radio of a young Los Angeles opera company’s plans to revive their first operatic production, Trouble in Tahiti, in a small theater space in a Santa Monica park. He immediately called for tickets.


On Sunday, April 15th, the day after we had watched the HD-live production of the MET’s La Traviata, Howard and I attended this amateur production of the Pacific Opera Project. The singers, all of whom had performed in small companies and in lesser roles in professional opera groups, introduced themselves, first performing—almost as a sort of bonus and promotion for their upcoming production, in Pasadena, of Cosi Fan Tutte—a medley of works from the Bernstein songbook, including numbers from Wonderful Town and West Side Story. Although their performances were certainly competent, the actors hammed-up their numbers a great deal, and their vocal ranges were not always best suited for the musical theater numbers they performed.


Their performance of Trouble in Tahiti, however, was near perfect—at least vocally. Using a minimal set of interlinked, painted walls, the trio of the girl (Tara Alexander) and two boys (Robert Norman and Ryan Reithmeier) perfectly captured Bernstein’s jazz-inspired riffs on “the little white house” in the numerous American suburbs where they exist. Jessica Marmey and Phil Meyer expertly played the central couple, Dinah and Sam, as they fight, battle, and wander through a day in their tortured lives, each escaping into fantasy worlds—Sam into his vision of male-bonded powe-broker and Dinah into the romance of the movie she has seen, loved, and yet mocks. Her lovely aria of a dream world of “a quiet place,” was particularly well done; indeed such longing almost breaks the heart. But this is a couple, after all, who both make up excuses, when they encounter each other in the city, why they cannot share lunch, only to sit, each of them, lonely and unfulfilled.


The remarkable thing about this small production is that, playing where it did, in a small local park in an intimate theater with about sixty audience members, both Howard and I were absolutely charmed by this theatrical experience in way that, after so many years of professional theater and opera, one begins to forget is at the heart of the art. It is a bit like attending a high school performance of a musical or opera about which one has little expectations, but is suddenly astounded by the freshness and resplendent originality of the work. While the film version I review elsewhere on this blog was brilliantly conceived and performed, this smaller production seemed somehow to get at the very heart of Bernstein’s simple two-piece operatic melodrama. And we both left the theater filled with a new kind of wonderment for both the piece and these young performers. Sometimes one simply has to go back to the roots of how one came to love theater and opera in the first place, to rediscover the simple marvel of talented individuals standing upon—in this case—a nearly empty stage and opening their mouths to sing out the pleasures and sorrows of life. Unlike all the productions of operas we have recently seen, the singers of this Trouble in Tahiti stood outside the entrance to the theater after the performance like the minister and chorus of a small town church to greet their congregation. We all shook hands and went home spiritually uplifted.