the blindfold
by Douglas Messerli

Luigi Illica and Giuseppe Giacosa (libretto), based on the play by David Belasco and the story by John Luther Long, Giacomo Puccini (composer) Madama Butterfly / the production I saw was a recast in high definition of the Metropolitan Opera production on Saturday, March 7, 2009 with Patricia Racette, Maria Zifchak, Marcello Giordani, and Dwayne Croft


Nearly anyone who has seen an opera knows the story of Puccini's Madama Butterfly. Having fallen in love with the dashing American Navy Lieutenant Pinkerton, the fifteen-year-old Cio-Cio San marries him, despite the fact that in doing so she must give up her own family and friends. With Yankee haughtiness and a sense of superiority, Pinkerton scoffs at the American consul's advice that Cio-Cio San is taking the marriage seriously, and soon after, leaves her behind as he sails off to America and, ultimately, a "real" wife.

Meanwhile, Cio-Cio San trusts that eventually he will return, singing her famed aria "Un bel di," in which she describes one beautiful day when a ship will sail into the harbor, returning Pinkerton to her. Meanwhile, Cio-Cio, courted by local men such as the wealthy Prince Yamadori, refuses to give up her so-called "American" marriage and ardently denies their insistence that Pinkerton has left her for good.


The consul, Sharpless, has been given the difficult task of reading a letter from Pinkerton to Cio-Cio, reporting that he has been married, and will not return, but she, so delighted to hear any word from her husband, cannot comprehend what he is attempting to tell her, and when Sharpless tries to explain the facts in a more outright manner, she produces her and Pinkerton's son whom she is certain will draw Pinkerton back to her.


Pinkerton, in fact, has already returned to Nagasaki, and has no intention of visiting Cio-Cio. When he does hear of the child's existence, he, his wife, and Sharpless, convince Cio-Cio's servant Suzuki, to break the news that Pinkerton and his new wife will adopt the son.


Finally, Cio-Cio, who has been blinded throughout the entire opera to the truth, has her eyes opened, realizing, in horror, her delusional condition. She asks Pinkerton, a man so selfish that he has refused even to face her himself, to return so that she may offer up the child. But we also know that she intends to leave him her own body, committing ritual suicide. Who could not be moved by Patricia Racette's dramatically convincing performance? The Lithuanian-born American next to us—who had never before attended a Met video performance—was in tears, as were Howard and I.


Belasco the original playwright and storyteller John Luther Long, upon whose work Puccini based his opera, were quite prescient in this fin de siècle piece, establishing a type, the ugly American, which has remained in place for all those years since, particularly in the context of the Korean, Viet Nam, Afghanistan and Iraq wars. In Puccini's hands, the dichotomy between the all-consuming Yankee and the self-sacrificing Japanese maiden could not have made clearer.


Yet, one can only recognize that it is Cio-Cio San's propensity for self-sacrifice is as much a problem in this relationship as has been Pinkerton's greed and disdain of her life. In her absurd innocence, she has been blinded not only to the impossibility that she could be recognized as an American wife, but has forgotten who she herself is and how her traditions and behavior conspire to permit the Pinkerton's of the world to prey upon such youths.

Puccini poignantly points up this fact by having her son, whom she has sent out to play, wander into sight just as she is about to draw the knife. To protect him, she blindfolds the child, sending him on his way. But in doing this she merely reiterates her own condition all along. Singing of her hope that her son will remember her at the very moment that she is about to disappear from his life, we can only perceive that were he to do so, it could only bring him great pain for the rest of his days. In Anthony Minghella's Metropolitan Opera production Howard and I saw, the child, "Sorrow"/"Trouble" was played by a Bunraku-like puppet, manipulated by three hooded assistants, which visually restated the child's future sense of emptiness, his destiny, perhaps, to join in the world of hollow bodies.


Accordingly, although the opera ends with a corpse upon the stage, we know that it is already a disappearing thing, representing as it does a way of living that will inevitably be replaced by the avaricious gluttony of the survivors.


Luigi Illica and Giuseppe Giacosa (libretto), based on the play by David Belasco and the story by John Luther Long, Giacomo Puccini (composer) Madama Butterfly / the production I saw was by the LAOpera, performed at the Dorothy Chandler Pavilion, Los Angeles, on December 9, 2012


Although there are many good things about this Los Angeles Opera production, based on an earlier San Francisco Opera version—including the singing of Milena Kitic as Suzuki, the ever-resilient bass-baritone of Eric Owens (some of his tones lost, however, to the Dorothy Chandler Pavilion’s unpredictable acoustics), and the basically excellent performances of Oksana Dyka (as Cio-Cio-Sun) and Bradon Jovanovich (as Pinkerton)—it would be simply unfair to compare this with the brilliant Anthony Minghella Metropolitan Opera production I saw in 2009. Although she has a strong soprano voice, Dyka simply is not a good match for the fragile, butterfly-like character. Singing at the top of her voice, one could certainly hear Dyka’s lyrical tunings, but she hardly seemed like a humble, obedient 15-year old which Patricia Racette more thoroughly convinced us she was. I look forward to hearing, at some point, Dyka’s Aida or Tosca.


The heavy reliance upon shifting screens may certainly be appropriate to the period, but the design has somehow aged, and the placement of Pinkerton’s Westernized bed in the midst of this spare set was jarring. Jovanovich also has a fine, strong voice which he used to great purpose in the LAOpera production of The Birds in 2009. But here he seemed, at times, to be trying to sing out against his powerfully-voiced wife. But these are surely quibbles about performances that the audience apparently quite enjoyed—as did Howard and I. I might just note that the usually “jump-up-to-applaud” Los Angeles audience remained mostly seated at opera’s end. 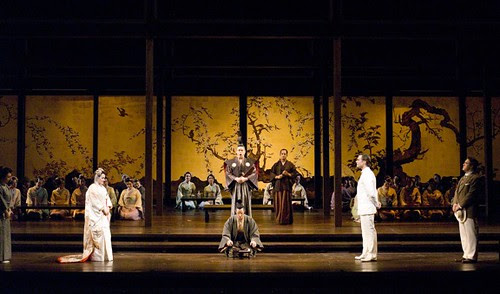 What struck me most while watching this production was just how connected to the works of the fin de siècle was Puccini’s 1904 opera. Beginning in the 1880s, writers such as Oscar Wilde, Joris-Karl Huysmans, and Arthur Schnitzler openly challenged earlier moralities, and the characters of their work not only dismiss more conventional behavior, but reject previously moral values with clear hostility. Consider Bertha Garlan, the heroine of Schnitzler’s book of the same name. Bertha, who has lived most of her life in quiet domesticity becomes bored and impatient after the death of her husband, and—seemingly encouraged by a woman friend who Bertha sees as open-minded, slightly-libertine figure—attempts, on a trip to Vienna, to strike up a sexual relationship with a previous acquaintance, now a famous musician. The musician is all too ready to accept the sexual part of the relationship, but rejects any further commitment, leaving Bertha a nearly-destroyed woman who has suddenly behaved licentiously near the end of a life which she has previously lived with restraint and motherly affection. In Schnitzler play, “Hands Around,” men and women strike up brief affairs, each figure moving on, in turn, to another, until the sexual interludes have gone full circle. Wilde’s Importance of Being Ernest proceeds out of a world dominated by lying (the major character participating in what he describes as “bunburying” his way through life) into a society where love seems to be based on one’s first name. Huysman’s Des Esseintes lives his entire life in the delectation of special foods and perfumes, reading obscure texts, and other sensate experiences.


So too does Puccini’s “coffee-house girl,” innocent though she may be, take up with an affair with a foreigner, delighted with his ultimate proposal of marriage. But Pinkerton, as we know, is a cad, not at all intending to keep his vow, and perceiving his Japanese wife of fifteen years of age (it would be hard to imagine presenting such a child abuser on stage today) simply as something to be toyed with. As he tells the only truly moral figure of the opera, the consul Sharpless, someday he will have a “real” marriage with a American woman.

As callow as he be seen today, Pinkerton was little different from almost any major fin de siècle figure, men and women willing to throw over everything for a life of sensual pleasures. Despite her utter innocence, so too in Cio-Cio-San willing to marry not only outside her culture, attempting to redefine herself in terms of what American men may like, but is insistent about abandoning her own religion and cultural values in order to explore the “pure joy” she feels from her love with Pinkerton—despite the ultimate rejection of her by all of her relatives including the powerful Bonze. Like Bertha Garlan, Madame Butterfly may have lived a life beyond reproach (much of that depends on how one defines a Geisha), but she is now determined to throw all that away for a man to whom she is immediately attracted (as she admits, she has fallen in love upon first sight). And, although, she describes herself as humble and modest, patient as she explains her real and symbolic climb up to the hill to the house where Pinkerton intends to “install” her, she is also determined to live a better life, presumably in the United States where she delusionally believes her husband will eventually take her and their son.


Puccini himself lived a sexually open life, living with and rearing a son with his mistress, Elvira, while simultaneously having other affairs with younger women such as Corinna, trysts he described as “cultivating my little gardens.” During the writing of Madama Butterfly the jealous Elvira insisted he marry her, in response to which Corinna threatened to reveal his love letters to the world. In short, the composer was not so very different from his characters, particularly if one sees Corinna as a kind innocent in the whole affair.


In short, one of the reasons why the audience can emotionally bear the tragedy of Butterfly’s death is not only that we know Butterfly lives in a world of denial—a world of how things should be instead of how they are—but that, despite how despicably Pinkerton has treated her, refusing to even admit his American marriage to her face, she too has been caught up in the liberating spirit of her age. And although all those around her insist that she face the truth, Butterfly stubbornly refuses to admit the consequences of her choices.


Based on a true-life figure, whose affair with Pinkerton probably occurred in 1892 or 1893, Butterfly herself was seeking experiences outside the range of normative moral behavior of the time, experiences which, while the fin de siècle writers may have often advocated,  also warned, just as Sharpless warns Pinkerton, might lead to dangerous consequences. Unlike Wagner’s heroes whose pure love for one another is betrayed by others and the gods, Puccini’s heroes have only their own desires, selfishness, and self-deceptions to blame for their fates.