delusion and desire
by Douglas Messerli


As scholars and critics have long pointed out, Hector Berlioz’s Les troyens—although written as a single long work (the performance I saw yesterday ran for about 5 ½ hours)—is really two different operas in one. In fact, Berlioz never saw a production of the entire work as he had conceived it during his lifetime, since the companies of the day felt that they were not up to producing the whole, and demanded it be broken into two parts: La prise de Troie and Les troyens à Carthage. The first part languished in obscurity until 1957 when London’s Convent Garden produced the first full-length production of the work. 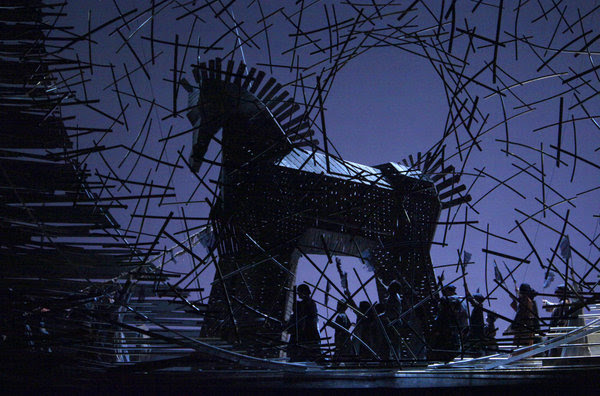 Certainly, what I witnessed, the first Metropolitan opera production of this work in ten years, felt like it broke into two, perhaps even three parts. The first is a far darker and less exploratory work, which, however, through the powerful soprano performance of Deborah Voight as Cassandra and the baritone voiced Dwayne Croft, as her lover, Coroebus, had many powerful moments. Cassandra, the daughter of Priam, is in the strange position of being ostracized by her own people for her dire predictions, and possibly even losing the love of Coroebus. Much of those two acts are spent on just those dark premonitions, which arouse powerful emotions, despite the fact that one wonders, at times, if she can see into the future, why Cassandra maintains her position that Coroebus should flee; surely his fate is written that he will die in Troy. Perhaps that is why, ultimately, she agrees to remain in the city and marry him, despite her belief it will end in their death. 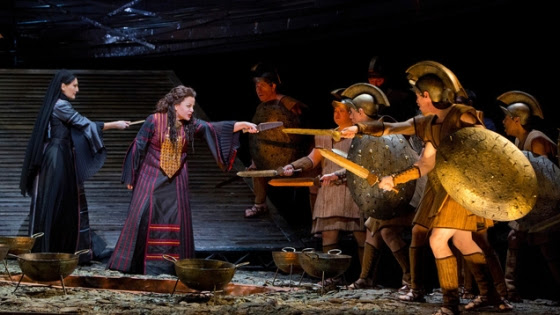 One of the loveliest moments of this first part is the sad arrival of Andromache, Hector’s wife, now a widow. The chorus, which is much at the center of  La prise de Troie, mourns Hector’s murder with her and her son Astyanax, along with King Priam and Queen Hecuba—this solemn occasion interrupted by news of the priest Laocoön’s and his two sons’ deaths for desecrating the Greek gift to the Trojans of the great wooden horse.


Inexplicably, the Trojans, despite Cassandra’s pleas, suddenly appear determined to bring the horse into their city, offering it up as an offering to Athena, an act powerfully visualized on the Metropolitan stage as the horse is pulled into view, assuring Troy’s destruction.


Certainly one of the most disturbing scenes of all opera occurs in the last few moments of the first part of Berlioz’s work, as the majority of the Trojan woman, hearing of the loss of their city and observing the burning castle and other major buildings, determine to kill themselves en masse, which, as the Greek soldiers appear, they proceed to do, dropping to the floor one by one. If there was ever a symbol of the end of any culture, it is this Jonestown-like suicide. 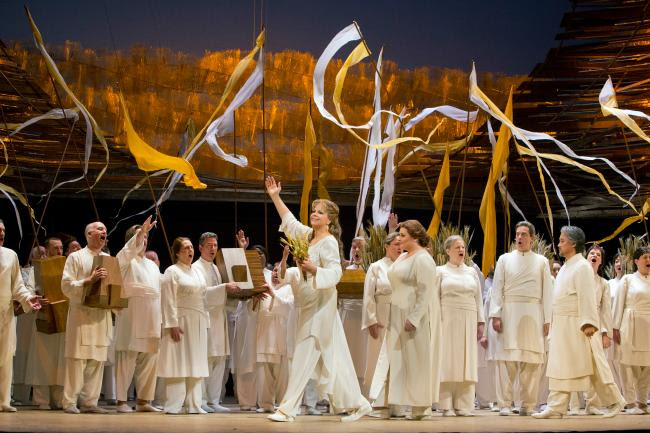 Indeed, much of the work, its constant focus on war and the hatred the Trojan warriors breed wherever they go, seems very contemporary, given just such events in the mid-East today. But, Berlioz almost lulls us into the dream of a paradisiacal peace with the long two acts that follow wherein the Trojans come upon the pacific Carthaginians, ruled by the beautiful Dido (Susan Graham). I am not sure that I completely responded to the white-clothed Carthage population, which looked more like a Mormon gathering than a North African community, but I suppose the reference was to a sort caftan-clothed community such as Morocco might be seen today. As opposed to Troy, whose populace have suffered years and years of violence, the Carthage population—who themselves have had to escape their home city of Tyre—seem to be a far-more enlightened people, celebrating their own creativity in ships and buildings and in toiling the soil. The queen, in fact, sits upon a throne seemingly tracking and glorifying the architecture of Carthage itself, as she and others add, throughout the early scenes, new constructions to this pop-up map. Yet, that set also somewhat irritated me, simply in its placement of her throne upon the very homes and buildings in which the people lived.


And although Dido seems wise and bountiful, she herself seems to have grave doubts about the future. Despite the fact that her sister assures her she will again find love, Dido resists the thought, insisting the she remain focused on her duties, for which is described as delusional—just as Cassandra had previously described for her visionary warnings.


The moment Aeneas (Bryan Hymel, who bravely and quite capably replaced, at the last moment, Marcello Giordani, who had been almost cruelly reviewed for his singing of the same role) arrives, war again appears on the horizon, this time in the form of Carthage’s neighboring Numidians. Having been awarded by Dido free entry to her city, Aeneas, upon hearing of the approaching warriors, offers his own soldiers up as partners with the poorly armed Carthaginians, assuring them victory against Iarbas and his warriors. 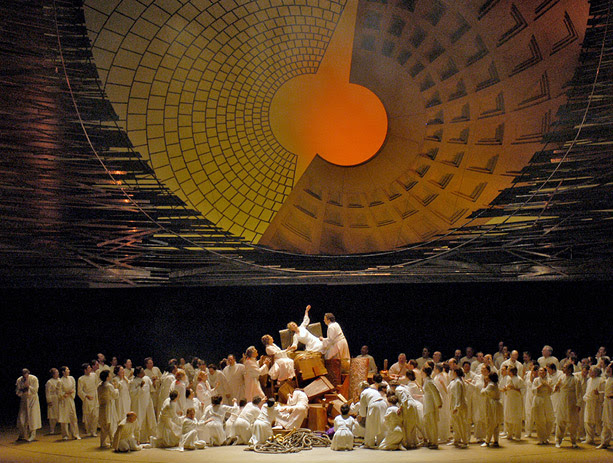 The rest of this two act section, is spent in dances—not always brilliantly performed in Sunday’s high definition broadcast, perhaps not so believably choreographed, and far too long, as much as I enjoy the French opera tradition of including ballet—is followed by several lovely ballads, particularly Iopas’ (Eric Cutler) pastoral song, O blonde Cérès—both dance singing in honor of the intense love that has arisen between Aeneas and Dido. Only the queen’s advisor Narbal (Kwangchul Youn) seems to proffer any dramatic intensity as he, like Cassandra earlier, foretells the end of his city through Dido’s romance.


So beautiful is Didos and Aeneas’ rhapsodic duet to their love (O nuit d’irvesse), however, that one wants to believe in Anna’s (the excellent Karen Cargill) belief that the future can bring nothing but joy.


Just beneath the surface of Aeneas’ own songs of the Trojan history—in which he recounts that after the destruction of Troy, Andromache, instead of killing herself, has married Pyrrhus, one of the murderers of her former husband Hector—wherein we are reminded of these wandering Trojan’s damnable fate. At the moment of their greatest bliss, predictably, Aeneas is visited by the ghosts of Hector, Coroebus, and Cassandra, reminding him that his destiny lies not in Carthage but in Italia.


Beginning with a beautiful ballad, Vallon sonore, sung by homesick sailor, the Trojan sailors are quickly awakened to that destiny once more, as Aeneas, escaping the arms of his beloved queen, determines to set sail. Dido’s appearance temporarily weakens him, but as the ghosts of his own past appear once again, he attempts to explain to her that he must abandon their love in order to obey his gods.

The opera from thereon belongs to Dido as, in her fury, she calls down fates upon the Trojan survivors, demanding a pyre of all Trojan presents and her gifts to them be constructed, upon which she, like the Trojan women of the first part, stabs herself to death. The pacific and loving people she has ruled suddenly become, like the Trojans before them, a warlike nation determined upon revenge, sensing, perhaps, their own destruction by the future Romans.


So ends Berlioz’ opera, in an unredeemable hate that fully links it’s ending to its disparate beginning, while reminding us that anger always breeds anger, war can result it nothing but further destruction.


Watching Les troyens is, at times, an exciting and stimulating experience. Yet I can’t say it was entirely fulfilling. I suspect our seemingly accidental choice of German bratwurst and potato salad for dinner that evening might have subconsciously suggested that we might have preferred—despite my usual preference for anything French—to have sat through, for a similar length of time, Wagner’s tale of a similarly destroyed culture—also with Deborah Voight—Götterdämmerung.