a rain of summons
by Douglas Messerli


By subconscious coincidence, perhaps, I reread Fornes’ remarkable play, Fefu and Her Friends, a day after reading Overmyer’s On the Verge, and I was struck at just how similar, in some respects, is Fornes’ groundbreaking 1977 comedy and Overmyer’s later work.

While none of the several women of Fefu treks through mountains or jungle—the eight figures of this work preferring to spend their time on the lawn of a New England house, and in its several lovely rooms, the study, the bedroom, the kitchen, and the living room—Fefu is described by Christina as having “an adventurous mind,” a woman willing to take chances, which she feels is dangerous. A rifle—whether loaded or unloaded—is the subject of discussion early in the play, and becomes a major prop by work’s end.


More importantly, nearly all of these eight “friends”—whom the audience encounters in different configurations in different rooms—are intrepid survivors of violence, loss, and delusions which they can perhaps only express in one another’s company. In their world—as separated from male companionship as are the three figures in On the Verge—these various strong but often frightened survivors can speak out openly and candidly. As in Overmyer’s play, moreover, the substance of the play is not so much what they say, but in how they say it. The events of their lives which they express are all rather vague: Fefu has clearly been abused by her husband (“My husband married me to have a constant reminder of how loathsome women are”); Julia has suffered a terrible psychic breakdown when a man has shot a deer near to where she was standing; Emma, who is obsessed with genitals, believes she will be punished for her obsession in the afterlife; Cecilia and Paula have evidently had an affair which ended it both of them feeling isolated and lonely and reproaching.


But we only get bits and pieces of these women’s vague past. Through her groundbreaking staging, moreover, the author encourages us to see these figures in bits and pieces, as if the viewers where almost voyeurs (the audience, broken up into four groups, to visit the different rooms in events are played out one by one, the words and actions of the characters performed four times each). What matters far more, as in the Overmyer work, is not our full psychological understanding of these figures, but the originality of how they express themselves to one another. Like the intrepid voyages of On the Verge, these women become strong through the community and the language that community engages in. Emma’s call to action late it the play (words taken from the prologue to “The Science of Educational Dramatics” by the early century teacher, Emma Sheridan Fry) reads almost like a feminist manifesto, urging her students (in the play’s case, the friends) to speak up and out, to express “Where are you? Where are you?”


Society restricts us, school straight jackets us, civilization
submerges us, privation wings us, luxury feather-beds us.
The Divine urge is checking. The Winged Horse balks on
the road, and we, discouraged, defeated, dismount and
burrow into ourselves. The gates are closed and Divine Urge
is imprisoned at Center. Thus we are taken by indifference that
is death.


For Emma, the environment is “a rain of summons” beating upon them day and night! 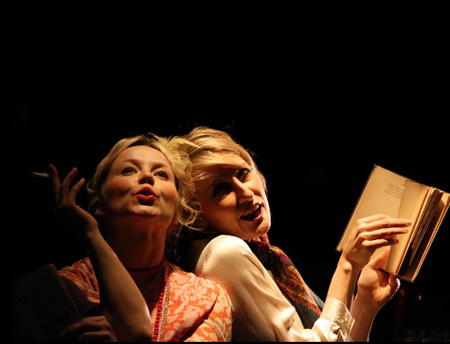 Yet each of these women is in some way locked into the struggles they must endure. One talks about the pattern of a love relationship, its demise, the refusal, the acceptance, the loss. Although Fefu realizes that she has long ago lost the love of her husband, she admits to Julia that she still needs him: “I need his touch. I need his kiss. I need the person he is. I can’t give him up.” Predictably, he accuses Julia of having given up, of accepting the death of the spirit that Emma has previously described.


At play’s end—in a scene that might again remind one of stories and plays by Djuna Barnes (in particular, “The Rabbit”)—Fefu takes up her gun and runs into the yard, shooting a rabbit. Just as Julia has been seriously effected previously by the killing of a deer, so now does a spot of blood appear on her forehead. For metaphorically speaking, she is the rabbit, a woman who cannot stand up to the violence she has suffered. Fefu—and all those like her—is dangerous in her embracement of life, for her angry response to the emptiness and hate she has had to endure.


Despite the quiet and intensely private conversations of Fefu and Her Friends, this play is braver in its call to arms than even Overmyer’s yearning ladies.