the devil meets his angel 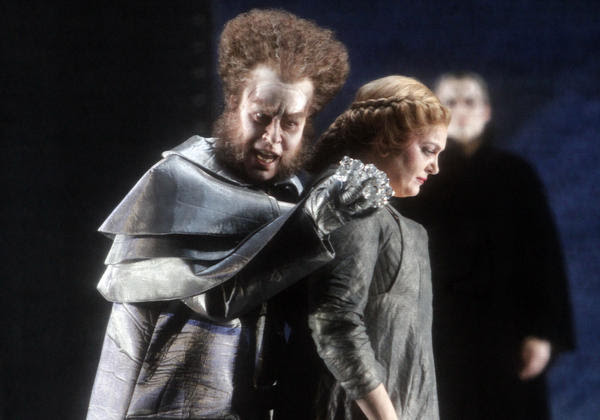 Wagner’s 1843 opera Der fliegender Holländer was perhaps the first in which he truly found the voice he expresses so profoundly in his later operas. However, there are also in this work several elements of comic opera that link him, for moments, with Rossini and other comic composers, particularly in the role of Senta’s father, Daland (James Creswell), and in the “second act” spinning song. The comedic elements were stressed in this production by Nikolaus Lehnhoff, first performed by the Lyric Opera of Chicago, particularly in the costumes designed by Andrea Schmidt-Futterer, with the high-piled wig of Daland and the honey-bee mirrored dresses of the spinners—all of which distracted, it seems to me, instead contributing to the heart of this work, the darkly-haunted hero doomed for centuries to sail the oceans and the woman destined to save him. 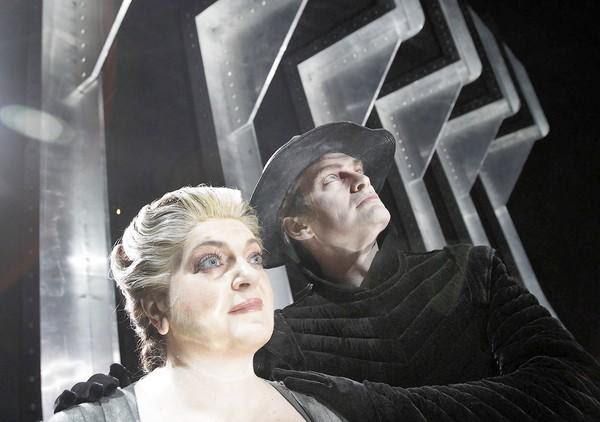 The sets, moreover, expressed their story literally with smoke and mirrors, which again, despite the sometimes beautiful effects, undercuts the darker elements of the work. Perhaps we needed some distraction from The Dutchman’s (Tómas Tómasson’s) lovely but rather small voice. Elisabete Matos, however, sang wonderfully as Senta, and Matthew Plenk, as the Steersman, performed as a lovely lyrical tenor.
Wagner’s tale, however, is far stranger: basically, as my companion Howard reacted, The Flying Dutchman is a kind of vampire story—without the bites! I immediately agreed. Indeed when one compares the idea of a group of sailors being forced to sail around the world endlessly, miraculously surviving their adventures because of their damnation, one is quickly reminded of F. W. Murnau’s Nosferatu, wherein the entire crew of the ship upon which undead man is coffined, die, the ship becoming overwhelmed, upon its eventual arrival in England, with rats.
Like Nosferatu, The Dutchman is damned by the devil, and like the vampire, he can find death only through the hands of a pure and faithful woman. Just as Gretchen, reading a book her husband has brought back from Transylvania, believes she must sacrifice herself to the vampire in order to kill him, so is Senta convinced by the ballad of the Dutchman that she is destined, in her love and faithfulness, to save the wandering sailor by joining him in death. And the implications of the central character, who lives primarily in an all-male world, being unable to find a woman who might be faithful to him has the same implications as does the vampire’s attraction to Hutter in Nosferatu, which also explains, in some ways, the odd scene in which the young women of this Norwegian fishing village, are unable to lure the Dutchman’s sailors into their arms, and why they flee upon seeing them. With his pale white skin and long black cape, indeed, The Dutchman strikes a figure that is not unlike the great Bela Lugosi.
Although the Dutchman is attracted to Senta, it may be more for her magic powers of freeing him from his doom, than it is about sexual love. He 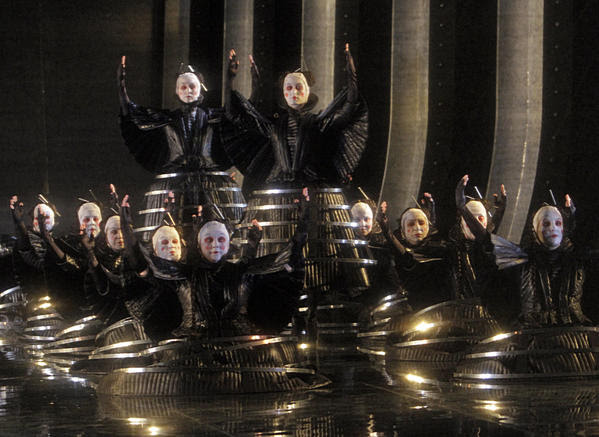 has, somewhat comically, already asked for her hand from her father without even seeing her, and when the two do meet, they are both speechless, The Dutchman, an emissary of the Devil, is particularly afraid of what he asking from this angel in making a spiritual contract with him. This helps also explain why, even though Senta has rejected the pleas of love from the simple hunter, Erik, the Dutchman immediately presumes the worst, cursing her for her lack of faithfulness, not even permitting her the possibility to explain before he sulks off into the distance. One has the odd feeling throughout The Flying Dutchman that part of the Dutchman and his crew prefer their long ocean voyages to the company of the bourgeois fishers of the towns they visit every seven years.
It is these slightly inexplicable elements of Wagner’s retelling of this story that actually lend The Flying Dutchman its richness and philosophical depths. The Dutchman may be, as Senta expresses it, someone to feel sorry for, a man of despair, but he is also clearly a man that someone like Senta, in her youth and beauty—just as Erik tries to explain to her—that she should abhor. Her very attraction to him reveals that she is not only an “outsider” in the community, but is compulsively suicidal, determined to face off with the devil in a world where she might have found peace, joy, and, with the gift from the Dutchman to her father, wealth. Yet this behavior of beings who do not allow themselves to “fit into” the world is precisely what transforms Wagner’s figures into such memorably mythical types.
In Wagner’s world, a fulfilling and sustained love between the sexes is seldom possible, and even when it exists, is momentary at best. Marriage is either insufferable or transitory. And angels such as Senta, or even gods such as Brünnhilde must sacrifice themselves so that their men and mankind itself can be granted salvation.