Francis Poulenc’s 1957 opera Dialogues des Carmélites is an extraordinary musical work, not only for the narrative powerfulness of the libretto, based on both Gertrude von Le Fort’s 1931 fiction, Die Letzte am Schafott (The Last Woman on the Scaffold) and an unpublished play by the great Catholic novelist and writer George Bernanos (the source also of at least two Bresson films)—its musical richness—encompassing as it does musical influences from the Renaissance, Verdi, Debussy, and Stravinsky—but also because of its unusual structure, basically a series of 12 short scenes spread over three acts (the intermission in this production occurred midway between Act II) in which the characters, often antiphonally, relate ideas and their psychological emotions in recitative form. The only “group” choruses occur during the Carmelites’ religious expressions, in their group prayers and, particularly, in the dramatic “Salve Regina” chorus of the last scene of the opera.


The production I saw (after a delightful breakfast at the Metropolitan’s Grand Tier restaurant) was originally introduced by John Dexter, first sung in English, in February 1977; this 2013 season the Met presented only three performances, the May 4th production being this year’s premiere of the work.


The opera begins in the wealthy home of the Marquis de la Force (David Pittsinger), a man who would like to ignore the rebelling peasants outside his estate, except that on one previous journeys he and his wife have been attacked in their carriage, resulting in the early birth of their daughter Blanche and his wife’s death. As Dialogues opens his son, the Chevalier (Paul Appleby) expresses his fears for his sister, who has been attending a ceremony in the Carmelite order in Compiègne, and her carriage, it has been reported, has also been stormed by the French mobs. The Marquis, despite his previous horrific experience, attempts to allay his son’s fears, while expressing his own fears of the rising revolution. When the daughter Blanche (Isabel Leonard) does return home, unharmed, all are relieved. And Blanche herself attempts to make light of her brother’s caring worries. Yet, we soon discover, as she becomes terrified when she observes the shadow of a servant attempting light the lamps, that she is a constantly terrorized young woman, a girl who often finds it difficult to even get through the nights. Perhaps a product of her terrorizing birth, Blanche would like to face up to the challenges of life, but finds it daily difficult to get through each day.

To resolve some of these problems, she is determined, as she tells her father, to join the hard life of the Carmelite convent, in the hopes to learn how to face up to life’s difficulties and to accomplish something worthy of her. Although her father tries to dissuade her, she insists upon her decision, and in the very next scene we observe her being interviewed by the head prioress, Madame de Croissy (Felicity Palmer), a loving but iron-handed leader who explains that the convent, whose major activities are devoted to silent prayer, is not a place of refuge or escape, but a world of engagement with the frailties of oneself and others. As Blanche expresses her determination and her decision of her name, Sister Blanche of Christ of the Gethsemane, a close relationship rises up between the ailing prioress and the young novitiate, perhaps because that was the name that the prioress had originally chosen for herself, but was dissuaded in choosing it since it signified of facing a life of dealing with Christ’s own most human doubts.
In the very next scene, among the working activities of the nuns, we encounter the other novitiate, Constance (Erin Morley), almost the polar opposite of Blanche. If Blanche is a frightened, nervous woman, Constance is light and optimistic, a woman who remembers dancing and singing with great joy, and in her innocent lightness seems ill-suited to her newly chosen life. Yet, unlike Blanche, she declares, she is unafraid of death, even reporting that she has envisioned her and her fellow nun’s death, both dying young on the very same day. 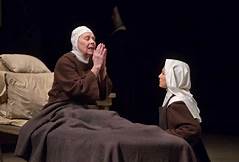 So begins a series of “dialogues” about religious vocation and values, as well as the concept of death and even martyrdom which dominate the convent life. On her deathbed in the very next scene, Madame de Croissy, worries about Blanche, consigning her special attention to the strong and loyal observation of mother Marie (Elizabeth Bishop). The prioress attempts to maintain the strength she has expressed throughout her long life, yet at the last moments, she too collapses in fear and despair, even cursing God. Only Blanche has been on hand to witness this momentary heresy, and she is warned by Marie to forgive and ignore it, to tell no one else.


Both Constance and Blanche might wish Marie would now become the prioress, but Madame Lidoine (Patricia Racette) is appointed to the role. As the revolutionary forces daily gain strength, Blanche’s brother arrives at the convent in an attempt to try to convince his sister to leave and return home to her father. In one of the most beautiful duets of the opera, sung between bars of crosses—representing both the separation of the young woman and a kind of confessional wall of admission—Blanche presents herself almost as a proto-feminist, insisting that she has grown in her role as a nun, that she is no longer a child, useless in the world—as her brother and father have always treated her—while she insists she will not abandon her sisters. The love between the two, brother and sister, almost plays out as a confrontation of sexual values.


Soon after the convent Chaplin (Mark Schowalter) is forbidden to perform his religious duties and is determined to escape, as the women increasingly perceive that they may become martyrs, just as Madame Lidoine reminds them that their role is to perform prayers; only God can chose them for martyrdom.


At the very same moment, revolutionary commissioners enter the convent to tell the nuns of their expulsion from the convent. The prioress is called away to Paris, and the nuns, now under the control of Marie, are terrorized, forced to cloth themselves as peasants. Marie, who has always recognized the martyrdom underlying their self-inflicted sufferings, asks the group to vote for a pledge of martyrdom from the remaining women. One by one—an action paralleling their later final voyage to death—each of them passes by the Chaplin, quietly whispering their vote into his ears. But the vote, in order to be valid, must be unanimous; if even one votes against it, they shall abandon their position. To most it is clear that Blanche still cannot summon up the courage to accept death, and as the final vote is announced with only one vote against, it is apparent that Blanche has voted with her fears. Constance, however, comes forward, claiming she has voted against it, but has now determined to change her mind. Might they vote one more time?


As the second vote begins, Blanche rushes out, just as the others are forced to leave their convent behind.


Her father having been put to death, Blanche now has no choice but to be a servant at the mansion in which she once lived. Mother Marie finds her there, trying to convince her to join the other women at a safe house.


Finally, determined to rejoin her sisters, Blanche rushes into the streets to hear that her friends have been arrested. All but Marie are sentenced to die. Marie would gladly join them but is reminded by the chaplain that it is God’s decision, not hers. And it will be Marie’s story ultimately that will become the basis for the recounting we are witnessing.

At the Place de la Révolution the crowds have gathered. Singing “Salve Regina,” the nuns, one by one, move forward up the path of officers where they enter between two soldiers at the tunnel’s end, who as they pass turn their backs to the audience, the crashing sound of the guillotine coming from just beyond. The powerful chorus continues as each bravely take their turn, finally becoming a trio, a duet, a solo as Constance begins and, suddenly in fear, momentary turns back. Blanche suddenly appearing out of the observing crowd reassures her young friend, following her, finally up the gauntlet to her own death, as the last voice among her order.


Such a powerful scene of faith and survival surely draws tears from almost all audience members, and, coming as it did, just after the Nazi outrages of World War II, the faith of these figures has special meaning. Yet it is hard to ignore the fact that these women of 1794 were also fanatical martyrs of a kind perhaps not so very different from the Muslim women “martyrs” of today. These 18th century women believed insanely in their powers, but in an age in which women had no power, that perhaps was a very significant statement. Certainly they were not wearing weapons of destruction nor were intending to kill others in revenge. Only their own bodies, which they perceived were in God’s hands, were offered up as symbolic weapons. What else could they possibly offer up in such a world?


In the case of the Carmelites, their prayerful actions apparently achieved their goals. Soon after, the so-called Reign of Terror and the Robespierre rule fell, in part, in response for these cruel and inexplicable murders. In 1906 Pope Pius X beatified the 16 murdered nuns.


I must add that conductor Louis Langrée brought out beautiful performances from the always memorable MET orchestra. And all cast members, who in this work must act as an ensemble, were excellent. The audience was not easily dispersed, and its applause was quite deafening.