Douglas Messerli | "Loud and Quiet" (on Kelly's and Minchin's Matilda)

loud and quiet
by Douglas Messerli


The most surprising theatrical experience of this year was provided by the British musical Matilda, based on Roald Dahl’s children’s book. Long before the musical opened and was heaped with praise from New York Times reviewer, Ben Bratley, I had ordered tickets and was looking forward to enjoying it. Along with Kinky Boots it has garnered since the highest number of Tony nominations. 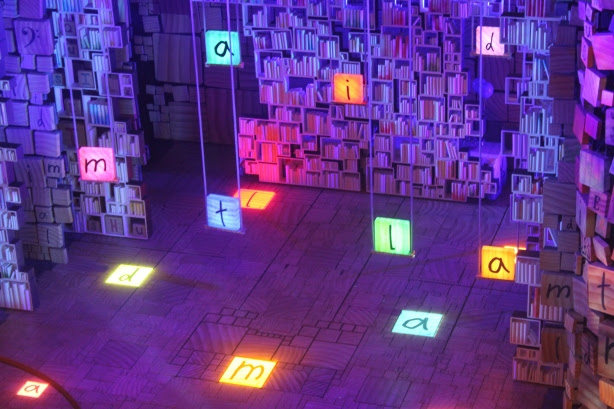 The set, consisting of a series of lettered blocks cascading across the stage and into the audience space, was quite innovative, and all the technical aspects of this work, particularly the lighting, was wall done. And who wouldn’t love the ridiculously mean child-hater, Miss Trunchbull (played in drag by the excellent Bertie Carvel), the absurdly mindless Mr. and Mrs. Wormwood (Leslie Margherita and Gabriel Ebert) and their brain dead son, Michael (Taylor Trensch). The choruses of urchin dancers put their collective talents in high gear through singing and dancing, and little Oona Lawrence (playing the role Mitilda) was charmingly able and cute. The audience, filled with overweight girls whose parents think it their responsibility to stock each of them with sacks of candies to be crunched throughout the play, absolutely loved it. So why didn’t I?


Was I turning and old curmudgeon, I pondered mid-way through the first act, the likes of which I’ve always promised myself I would never become. At the intermission, however, the couple next to me, seasoned theater-goers so I had discerned from our pre-curtain discussions, quietly asked me what I thought about the work. I paused, not wanting to staunch anyone’s joy of the performance. “We don’t like it all,” she quietly confided. “I even thought we should go home during intermission” added her husband. And I admitted, for the first time in my life, that I to had just resisted doing the same myself. So began the second act, which continued much as the first—for me an utterly joyless and rote playing out of the ridiculous fairytale about a little girl who is punished for being smart. 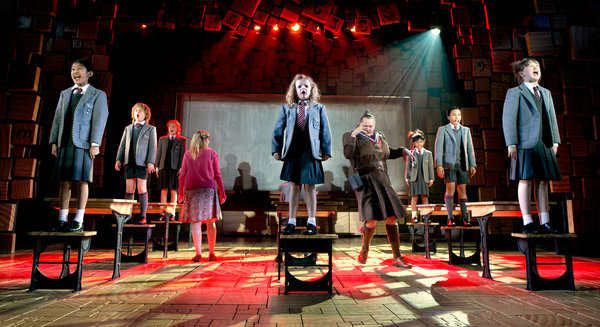 Part of the problem was simply the mumbling of the mostly British cast (Bratley did warn of this). It was often simply hard to understand the lyrics of the basically tuneless songs. Having perceived that, perhaps, the director apparently attempted to turn up the volume, as if we were all hard of hearing. In fact in the 7th song of act one, the singers note that issue precisely in the number “Loud,” and in the final act Matilda herself observes that suddenly, momentarily at least, things have grown “Quiet,” the third song from the last.


Accompanying these “loud” pastiches, all of which sound, like so much contemporary theater music, as if they were created by a machine programmed to connect the dots, are the well-intentioned dances which both children and adults perform as if they have been robotized. While they certainly leap about with great energy, there seems to be no joy in their gyrations. Only the Wormwoods, she with her dancing partner Rudolpho (Phillip Spaeth), he in his rubbery legged motions within striped lime-green pants, seem to have any “choreographical” fun.
Matilda, whether she is telling “loudly voiced” (at times even shouted) stories to her local librarian or suffering the attacks of Miss Trunchbull and her own family members, almost gets abused out of existence. The only moment, until the musical lurches to its end, that she is allowed to express any joy is when the tender Miss Honey asks to be her friend, to which she responds with a big hug. Otherwise she is just a figurehead, a brilliant young girl at whom nearly everyone else yells in derision. Even poor Annie, of the musical of that name, got more love and attention from her evil headmistress, than does Matilda.
It is not, however, that Matilda, as its makers have argued, is a “dark” work, as much as it is empty. While Annie, at least, had “tomorrow” to look forward, Matilda is amazingly unflappable, committed to her reading and thinking as mindlessly as Miss Trunchbull is committed to her hate. Despite their thoughtless machinations, I think I’d prefer to live with the Wormwoods than with the fantasy-spinning, slightly aloof Matilda. But, obviously, there is no living with anyone in this tale, since each character is nothing more than a cardboard, cartoonish type. Even the gentle Miss Honey lives out life in a shed instead of a house, as if her whole world has been miniaturized and flattened. Only Miss Trunchbull, ensconced her in ill-gotten mansion, has any “bulk,” and she’s more fun than everyone else put together.


Indeed, despite the work’s pretense of siding with the small and quiet Matilda, this musical advocates the loud and large, which is perhaps why all the girls both in front and back of me sat throughout with their sacks of candy on their laps.


So desperate to be loved was Dennis Kelly’s and Tim Minchin’s work, that at one moment near the end, the stage suddenly burst—apparently in response to the downfall of Miss Trunchbull—into a shower of strobe lights, while green lasers shot out across the ceiling of the uncomfortable Schubert balcony. “Awesome,” shouted out a child in the audience. It was at that point I had to admit that this was simply not a work created for the likes of me—nor for my two dazed neighbors, who together with me made our way grumpily back into the crowded mid-town streets.


“Why do you think,” asked the wife, “this got such remarkably positive reviews?” “I don’t know,” I responded, “but it might have something to do with the fact that this has not been a particularly stellar season. Reviewers have to like something.”

Posted by greenintegerblog at 8:01 AM