Douglas Messerli | "On the Cusp" (on Thompson's, Kander's and Ebb's The Scottsboro Boys)

David Thompson (book), John Kander and Fred Ebb (music and lyrics) The Scottsboro Boys / Los Angeles, the Ahmanson Theatre, the performance I saw as a matinee on June 1, 2013

Other than the Broadway musical writing team of E.Y. Harburg and Burton Lane of the 1940s, John Kander and Fred Ebb might be described as the most politicized of American musical composers. From their early Flora, the Red Menace, to Cabaret, with its singing Nazis,  Chicago, with its murderous molls, and Kiss of the Spider Woman, with its homosexual and heterosexual prisoners, Kander and Ebb have taken on big themes, somehow wedding their edgy dramas to hit musical numbers, through a great deal of irony and pure postmodern pastiche. The central dilemma in all their works is how to tuck their dark themes into entertaining, brassy, Broadway displays that keep their audiences coming back for more, despite the brutality of the world the musicals display. Often, as in Cabaret, it is the very naiveté of their “villainous” figures—if you can call chorus girl Sally Bowles a villain (surely if not a villain she is a willing collaborator with the rising Nazi regime)—that poises their works on the cusp of the comic and tragic.

Of all their works, their last (even this completed after the death of Fred Ebb), The Scottsboro Boys, is the most daring, as they take on the sad story of nine young Southern Blacks falsely accused of raping two white women on a train, tried for murder several times, with many of them imprisoned from 1931 to 1952 until their deaths. Despite any real evidence and a recantation by one of the women in the second of numerous trials, these young men, aged 13-19, were found guilty in Alabama year and after simply because of the color of their skin.

Given the usual subject matter of Broadway musicals, it seems almost ludicrous to think that even these two seasoned creators might have found a way to tell their story through infectious music and dance. That they chose the minstrel show as a form in which to accomplish this—a genre that for years itself demeaned and stereotyped American Blacks—is even more audacious; but, in fact, in its very highly exaggerated tropes and character types such as the Interlocuter, Mr. Bones, Mr. Tambo, and Jim Crow, it strangely makes sense to tell this tale in this manner, particularly since, in the version I saw, the Interlocuter (judge, accuser, bigot, and Alabama governor rolled into one) was played by the only one of two white man in the cast, the wonderful Hal Linden. Along the way, Kander and Ebb, are able to somehow satirize dying in the electric chair, being on a chain gang, and the sacredness of  “Alabama Ladies”— in this case, because the two sacred paragons of Southern feminity, were, in fact, whores. Even the Yankee lawyer, the well-meaning but ill-suited Samuell Leibowitz, is poked fun of in “That’s Not the Way We Do Things.”
To balance these barbed and often barbarous numbers, the authors center their tale on the nine boys themselves, using minimal sets (framed thrice, each time a little more off center), with mostly lighted panels and chairs, which serve as the circle of the minstrel show, prison bars, railroad cars, electric chairs, and a terrifying isolation box. Although the nine Scottsboro boys did not all know one another in the beginning, by the end, they have come through almost as war-like comrades, the central figure Haywood Patterson (the powerful singer Joshua Henry) even learning how to write, and leaving upon his death, a written testament of the terrible travesty of justice. The heart of the musical, accordingly, is not the frame of the cake walk, but the painful songs of fear, fortitude, and just plain confusion of its central figures, which allows us to fully empathize and get to know some of the so-called “boys,” which by musical’s end are middle-aged men.
There are several powerful moments in this musical, but two stand out. Offered freedom by the Alabama governor if he only admits to have committed the rape, Haywood Patterson, advised by his lawyer to say “yes,” dares to say “no,” denying the crime of his which he has been convicted and assuring his life beyond bars. But in his very denial, he grows into a man who suddenly represents a beacon of truth in a world in which there are few moments of liberating light. His beautifully sung, “You Can’t Do Me” is certainly one of the great songs of Black determination.
The other moment that made the audience gasp with recognition was at the very end of this piece. Throughout the musical, an unknown black woman sits upon the stage, a kind of mother-figure observing the strange goings-on. One reads her as simply a kind of witness to these terrible events. But (spoiler alert) in the very last scene we suddenly comprehend just what kind of witness she has been, as a white driver demands a bus rider, the same Black woman, to go to the back of this bus. Rosa Parks refuses, and we suddenly see how these poor young boys and their deaths truly had significance, despite the pain and abandonment they must have felt in their own lives. There is no doubt that the direct linking-up of these two events is somewhat “manufactured,” but it works nonetheless as a representation, if nothing else, of how all life, despite hate and injustice, can have significance, meaning, and worth. 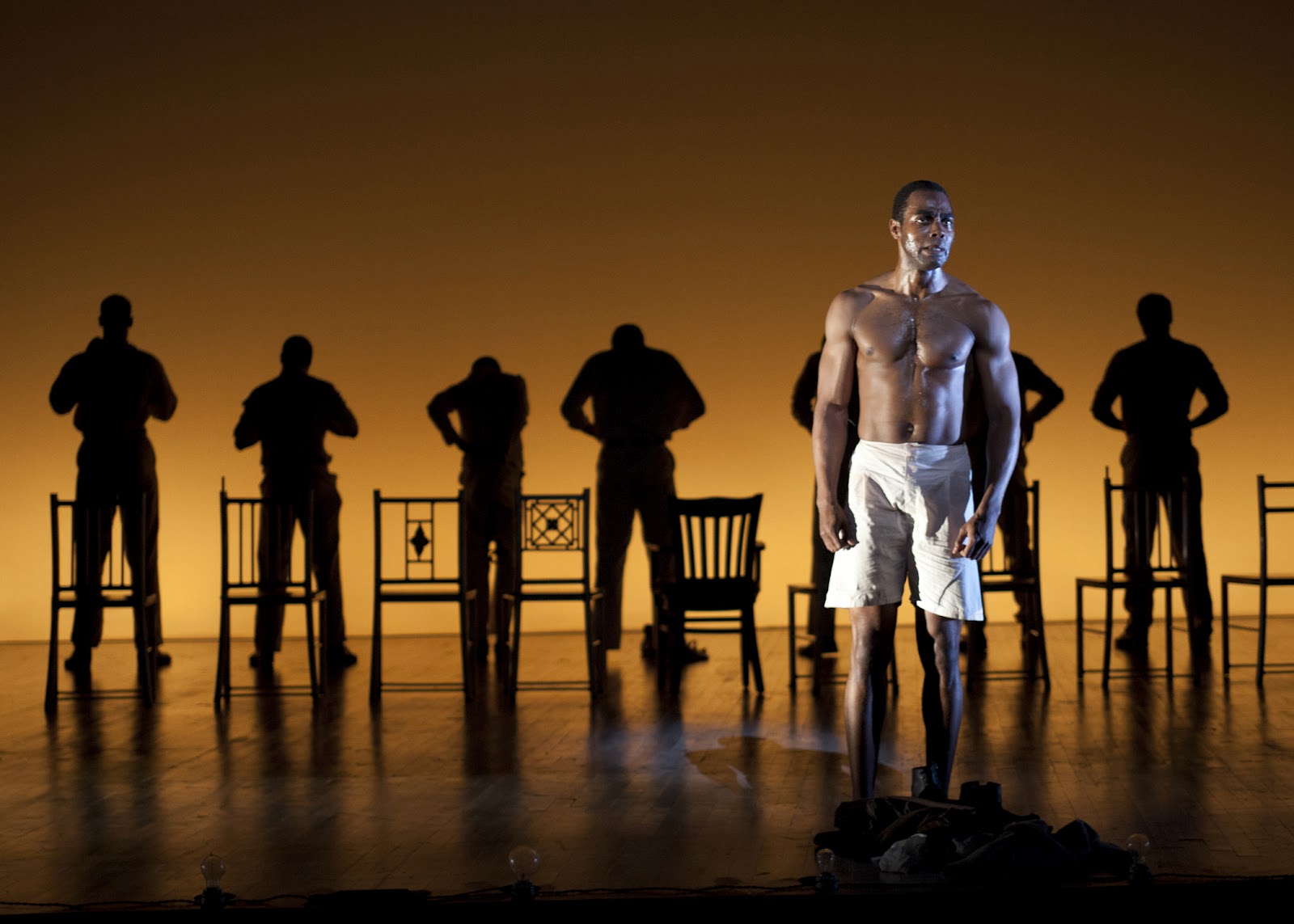 My appreciation of this musical however cannot mask the fact that there are a few serious problems. First of all, the score simply is not as clever and radiant as works such as Cabaret and Chicago. Although director/choreographer Susan Stroman has become almost a theater legend, I still find her chorographical skills somewhat leaden. Certainly, at times, the boys dance up a storm, leaping into the air in long chorus lines; but there is always something too controlled and patched together about her works (see my comments on her Oklahoma! in My Year 2003), and there are seldom any terpsichorean surprises in her creations. Similarly, her directing is capable but basically uneventful.
Finally, the writers themselves have almost paralleled the horrible history of these Scottsboro Boys by failing to delineate their characters. Although we get to know Haywood Patterson, the other men seem always to be in the wings, hovering merely as chorus members instead of his fellow prisoners. Only in the scenes where the young Leroy “Roy” Wright teaches Haywood the alphabet, or when the mentally-retarded Ozie Powell attacks a deputy and is shot in the head by the sheriff, leaving him with brain damage for the rest of his life, do any of the other nine snap out of their silhouette portraiture.
Still, given the innovative method of storytelling and the substantially heart-breaking historical facts that Kander and Ebb reiterate, this is a musical to be applauded.