Douglas Messerli | "This One Has Been Being Very American" (on Glass, Wilson, and Child's Eistein on the Beach)

this one has been being very american
by Douglas Messerli


Robert Wilson (direction and set and light design), Philip Glass (music and lyrics), Lucinda Childs (choreography), Christopher Knowles, Samuel M. Johnson and Lucinda Childs (spoken texts) Einstein on the Beach / 1976 / The performance I saw was at The Dorothy Chandler Pavilion of the LA Opera performance, the matinee of Sunday, October 13, 2013 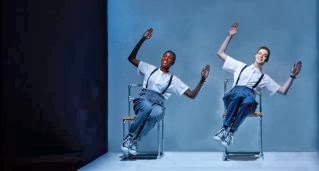 With great anticipation I attended the now legendary Einstein on the Beach on Sunday, a work which I had missed for almost four decades, a performance likely to be its last American showing overseen by its original creators, Philip Glass, Robert Wilson, and Lucinda Childs. I was willing, I was wanting to be wowed!


Unfortunately, I was not. When asked by my friend Marjorie Perloff about my reactions, I could only comment that they were very contradictory, some positive, others not so; but generally, unlike so many of my acquaintances who had seen it, I was simply not in awe!


My feelings about this are not based, as anyone who has read my essays would guess, on the work’s impenetrability, on my not being able to—as critic Tim Page had described it in his lecture before the performance—find my own “gate” into the work. Indeed, the work seemed quite wide open to me. Its structure, vaguely suggested by writer Christopher Knowles around the motifs of “trials, jails, communication, and transportation,” almost all in some way loosely relating to elements of Einstein’s thinking and life. In the broadest sense, we might comprehend Einstein on the Beach as a vague, disconnected skein of events occurring during what we might call “The Age of Einstein,” from the earliest days of Einstein’s theories to the time of his death in 1955—although the work extends also beyond that period to Patty Hearst’s kidnapping and joining of The Symbionese Liberation Army in 1974. Although the events of this “opera” are not presented historically, there is a sort of chronological rhythm, beginning with the simple idea (in the first of the remarkable Knee Plays) of counting, as the figures of the chorus and dancers move forward and backwards in rhythmic motions and spoken patterns, with the first long scene moving on to the inevitable train, recalling Einstein’s experience in a still train that, when passed by a moving train, gave the impression that he too was moving—ideas which led to his Theory of Relativity. Throughout the work also we are introduced to images of the sea, a place beloved by the scientist, and we presented in several beautiful instances with Einstein’s own love of playing the violin, as Jennifer Koh, her head topped in an Einstein-like hairdo, stunningly executes some of the work's most inspired passages of music.


In between are various scenes about love, failed and fulfilled, and an almost random selection of social and political events of the era, from racism, women’s liberation, political revolution, to gay liberation (suggested by Child’s “Dance 2”), and provocative and disturbing international events such as the rocket sequence and, almost as an aftermath, the atomic bomb—also related, of course, to Einstein’s theories. Some of these, in particular the “Night Train” sequence, the “Building” sequence,  the “First Dance,” and the final Knee Play, are quite lyrical and intimate. Others, such as the first and second “Trials” are, at least to me—my companion Howard and others of my friends were not so taken with the language of either—filled with remarkably comic poetry. The first “Trial’s” “Mr. Bojangles” harangue, written by Christopher Knowles, is almost Steinian in its delicious illogic and repetitions argued by the court lawyer (Patrick John O’Neill): 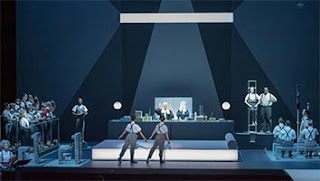 
This court of common pleas is now in session.

If you see any of those baggy pants it was huge

So this is about the things on the table so this one could he counting up.

The scarf of where in Black and White

telephone and if anyone asks you please it was trees it it it is like that.


The scarf of where in Black and White

This about the things on the table.

This one could be counting up.

This one has been being very American.

The scarf of where in Black and White.

This about the gun gun gun gun gun...
In this remarkable piece American stereotypes are called up from the roles played by Black dancer Bill Robinson to the Bob Dylan composition referring to a white street dancer in baggy pants, while simultaneously suggesting the American cultural history of the minstrel shows, all resulting in the kind of sophistic logic of sentences such as “if you knew it was the violin to be….answer the telephone” and the wonderful closing “if any one asks you please…it was trees,” all ending in the stutter of “it it it it it it it it it,” repeated in the final result of this aspect of the American experience  (“This one has been being very American”), in the violence expressed in “gun gun gun gun gun.” 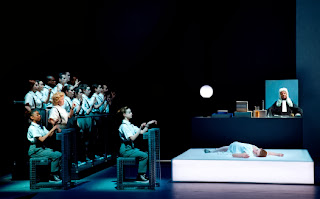 Similarly, in the second Trial—also memorable simply because it is repeated almost 40 times—Lucinda Child’s Patty Hearst speech, performed from a large bed, is equally poetic in its effects, calling up, as it does, Allen Ginsberg’s “A Supermarket in California,” and expressing the wacky consumerism of a woman in “a prematurely air-conditioned super market” attracted to bathing caps despite the fact that she has been avoiding the beach:

I was in this prematurely air-conditioned super market

and there were all these aisles

and there were all these bathing caps that you could buy

which had these kind of Fourth of July plumes on them

they were red and yellow and blue

I wasn't tempted to buy one


Other texts are first embedded in nonsense phrases that gradually become rhythmic units that slowly turn into recognizable phrases and ultimately sentences: 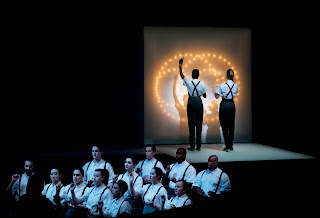 
some wind for the sailboat?


Or the earlier, What does he want? series of repetitions.


Visually things move slowly in time and space back and forth, from horizontality to vertical positions. All is relative. But also all these create narrative links, often repeated in the intermittent Knee Plays. 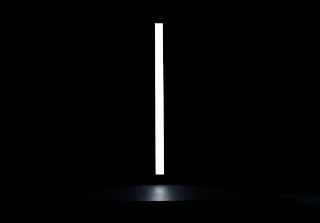 Underneath, or perhaps one should say, on top of these scenes, is the continuously pulsing beauty of Glass’ music, like the texts, shifting in their endless repetition from simple pulses to widening layers of melody.


So what is my problem, you might ask? Haven’t I just described an incredible piece of art? Yes and no. For the problem is that this work, which so purposefully resists all narrative structures, is, as I argue, extremely narrative. Admittedly, I see narrative (as opposed to story) in practically everything, and have long been convinced that we inherently think in narrative patterns (at least I do). But the work’s very resistance to those narrative threads inevitably creates a search for deeper links between the “opera’s” parts, which is insistently and sometimes meaninglessly denied. Had the creators of this piece been willing to simply describe their work as a kind of Cagean “circus,” we might have all been able to simply sit back and enjoy its various parts; but by portentously tying it to Einstein, and purposely toying with ideas that are vaguely Einsteinian, they merely frustrate all efforts to penetrate, while seemingly demanding that we still attempt to make a whole of the pieces. 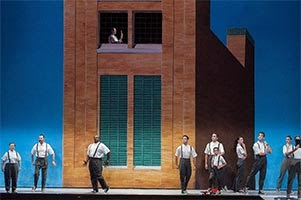 Why choose these certain elements of American cultural history in the Age of Einstein, and not others? Was it merely that the creators had already worn us and themselves out in the 4 ½ hours they had arbitrarily determined (it was, originally, even longer)? I am not asking for a fluid narrative rise and fall of action, nor even a kind of coherent and binding structure, but, I’m afraid, the creators seem to be, and that transforms the work from being an enjoyable series of musical, visual, theatrical, and terpsichorean episodes into an often frustrating endurance test.


Finally, the work does not today seem as radical as its creators and faithful admirers describe it to be. Throughout, a great deal of the work is simply sentimental in both its images and language: a half moon gradually turns into a full moon as the silent lovers on a slowly moving train briefly come together in a gentle touch. The mellow jazz tenor saxophone solo of Andrew Sterman justifiably haunts all the urban street walkers—as well as the audience.  Although the judge of the first Trial (the excellent Charles Williams) brilliantly imitates a feminist from Kalamazoo who, tired of bearing babies, wants all her kisses back, the final scene ends with an oscillation of a kiss between park bench lovers. All right, I want love and peace as well, as I’m sure Einstein did. But I think I might never describe the depth of my feelings in the clichéd language of a lover, as containing more than the grains of sand on the seashore or stars in the sky. The work seems to have much more fun when it simply counts. And in counting it matters more than its simple-minded solutions proffered by a bus driver in the dark.


Surely, if nothing else, this is not radical thinking, as Tim Page argued for it beforehand. The theater of language by writers of a decade or two later, like Mac Wellman (in Terminal Hip and The Great Magoo, the later also with music), Len Jenkin, Richard Foreman and Eric Overmyer, for example, are, to my way of thinking, far more radical. Let us just agree, that in its mix of forms and thematic arches, Einstein on the Beach is, in fact, “being very American,” at moments profoundly complex, at others, entertainingly hollow.