nothing on a lecture
by Douglas Messerli

Robert Wilson (director and performer) John Cage’s Lecture on Nothing, Music by Arno Kraehahn / the performance was presented by the Center for the Art of Performance at UCLA at Royce Hall, Tuesday, October 15, 2013 (world premiere)


Given his penchant in Einstein on the Beach and other operas and performances for repetition and long, slow movements, one might well comprehend Robert Wilson’s attraction to John Cage. Cascading the Royce Hall stage with long white scrolls on which various words and phrases of Cage had been written, Wilson himself dressed in white with white face, Wilson's performance promised to be interesting. But almost from the beginning, with a piercingly loud electronic blast lasting for seven minutes, during which an actor with a telescope appeared scanning the horizon, presumably searching for “something” as opposed for the promised “nothing,” much seemed amiss. I immediately perceived in these theatrical tricks the vast difference between Wilson and Cage, bringing me to increasingly wonder, as the performance moved on, why Wilson had chosen to reinterpret Cage’s famous piece.


I did not ever hear Cage perform in own work, but having known Cage I can imagine how he might perform it and others have attested to the fact that when the author read the work it was spoken quietly, honoring the spacial pauses of the written text—which I, myself, republished in my From the Other Side of the Century: A New American Poetry 1960-1990. Wilson, at first, seemed also determined to honor these tactics. Much of the Cage work is memorable and quotable, and, for a few moments I simply took the pleasure of Cage’s talk, “Slowly, as the talk goes on, we are getting nowhere and that is a pleasure.” At one point Cage indicates the whole structure of his talk: “We need the glass and we need the milk.” As Los Angeles Times critic, Mark Swed, pointed out, however, it is neither the glass nor the milk on which Cage focuses, but the pouring, the process of creating this piece—which, in fact, is the “something” the text itself seems to deny. 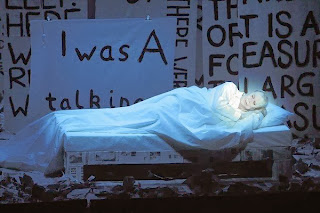 As always with Cage’s pieces, there is also significant interchange between the speaker and listeners. Early on in Lecture on Nothing Cage notes “If anyone is sleepy, let him go to sleep,” repeating it from time to time, as if encouraging those disinterested in his pursuit of silence and nothing to remain silent and accept the work as “nothing.” But for Wilson, quite obviously, desperate, so it seems, to make it clear that Cage was indeed saying an important “something,” one of these repeated phrases leads him into a theatrical and outright corny gesture where he stands up and moves to a bed, crawling into to be and pretending to fall sleep. A visual of the Russian poet Mayakovsky appears, smoking a cigarette while, as, for a short period, we hear Cage’s gentle and probing voice instead of Wilson’s (Thank heaven!).
When Wilson died return to the table, articulating Cage’s fascination with the process of his speech, naming its various parts and sections as if it were a work of music with various movements  (which, in some senses, it is), he soon seemed frustrated by this naming and framing process, moving in the text faster and faster while continuing to raise his pitch until he ended in a kind of angry scream, not unlike the original blast of electronic noise—something so unCagean that it seemed to come from different planet.
I am no purist, and I truly don’t mind different and, in this case, a far more theatrical reading of one of my favorite texts. But I cannot comprehend why Wilson decided to tackle Cage’s work or why he performed it as he did. The marvel of Cage’s Lecture on Nothing is that in its silences, pauses, self-conscious statements of its own structure, and denials of grand ideas, it truly becomes a beautiful something, If you search too hard, without bothering to listen, you will not find it. Wilson’s personal interactions do just that, distracting us from the text, leaving us with much less, almost nothing.