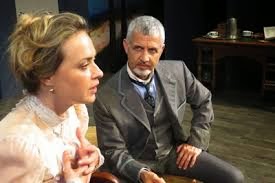 If Miss Julie, at times, seems dated in its melodramatic flourishes, during the same year, 1888, Strindberg created one of his most psychologically modern works, Creditors, which seems less like an internal war between social and moral values than a Freudian and even post-Freudian drama of sexual manipulation, a difference not unlike that between Ibsen’s 1881 drama, Ghosts, and his 1890 work, Hedda Gabler, which Strindberg claimed was based on his work. Certainly, there are several similarities, but Strindberg’s Tekla is no Hedda. Although both women are powerful sexual predators, Tekla (Heather Anne Prete), in Strindberg’s misogynistic vision, is less a violent force of action than a flirtatious Eve. In a world in which free will no longer has meaning, Tekla is simply a determined being acting out her destined role, to love and be loved, even if that means cheating on her two husbands. If by play’s end she is consumed by guilt, she has spent her life, beginning obviously from youth, in learning how to play the coquette, staring into the eyes of handsome strangers, lifting, ever so slightly, the hem of her dress to reveal her undergarments. It comes certainly as no surprise to us that, in the second part of this short play, her former husband, the hypnotically suave orator, Gustav (Jack Stehlin) can so easily convince her to return to his embrace. This Eve, for Strindberg, despite her newfound writing skills and ever-so-slightly feminist leanings, is an open-and-shut case. She may have had the power to dominate her younger and obviously weaker pretend-sibling—the man for whom she has left Gustav, the handsome and apparently sexually competent Adolph (Burt Grinstead); but all the snake has to do in order to convince her is to flatter her, take her side in her self-defense, and she readily succumbs.
What is most interesting in this fable-like play is not Eve’s embracement of the serpent—after all, she has long slept in his bed, and only in his absence has taken up with a younger, sexier man—but the serpent’s long and convoluted seduction of Adolph, this play’s Adam-like innocent. 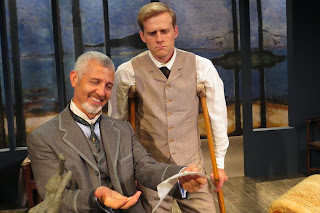 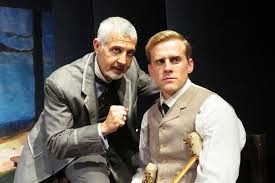 Before the audience has even entered into the open-staged arena of this work, Gustav has already, quite mysteriously, befriended our young hero and convinced him not only that he has serious problems but that he should abandon painting for an entirely new art form, sculpture. Strindberg does not bother with the implications of this change, but obviously the transfer from flat representation of reality to a recreation of things in space (a small sculpture of his beloved Tekla is repeatedly covered up and revealed through their conversation) is not a simple visual shift. Adolph, like Adam, is a dreamer, a thinker who has suddenly been forced to begin to think of things in space. And Gustav, taking advantage of Adolph’s discomfort with the transformation, turns the conversation again and again to subjects than demand concrete confirmation of experience. Like a canny Iago, Gustav reimagines the couple’s meeting, their innocent play-acting as brother and sister, and their gradual breakthrough from pretend siblings into outright lovers. Imploring Adolph for more and more details, Gustav reveals begin  how the formerly strong young man, thought to be a great talent by his friends, poured his energy and life into his new Eve, building on what he does know the knowledge Gustav has already bequeathed her, by encouraging her to write about her life. Bringing her into his artistic community, Adolph, so we discover in his confessions to Gustav, transfers his ego onto Tekla, diminishing his own work and life by projecting aura of great achievement upon her. Both Adolph and Gustav reveal, Tekla is not terribly talented as a literary figure. But, in a typical Strindbergian stab at the opposite sex, Tekla is represented as a somewhat mediocre figure to whom Adolph has given up most of his mental and bodily energies. By the time we meet him in the somewhat paradisiacal Swedish seaside hotel, he is crippled and weak of mind. What is marvelous about this play is that we never know for certain whether Adolph was always the weaker of the two—“a little brother,” as Tekla describes him—or recently brought down into the condition in which we find him. All we can note is that Gustav takes advantage of Adolph’s male ego, driving a wedge between husband and wife, demanding that Adolph give up sex and to take back control of his own life, while continuously reprising the dangerous flirtatiousness of his former wife.
So close do these men become in their intent on vengeance—although each of a different kind—upon the female sex that, at moments, their relationship seems almost homosexual, as Gustav, again and again, leans into and upon the handsome young man, representing himself not only as a kind and trusting friend, but as a sort of incubus, an evil demon lying, in this case, on his male counterpart to take over his existence.
It is an age-old story, the snake able, finally, to convince Adam to eat the fruit of his own self-knowledge, to watch and listen to his seduction of Tekla, that proves Adolph’s and his Eve’s fall, here represented as death itself.
The creditors or debtors of Strindberg’s world do not so much owe other human beings, such as Gustav, but themselves for having abandoned their own ideals and innocence, for having in their relationship given up their own selves, the dilemma of marriage to which Strindberg would return to in later works.

Posted by Douglas Messerli at 7:57 AM