Douglas Messerli | "Emblems of Love" (on Mozart's The Magic Flute)


emblems of love
by Douglas Messerli

Let me begin by admitting to what some may see as sacrilegious: of Mozart’s major operas, I least like his The Magic Flute. To me both Don Giovanni and Cossi fan tutte, the latter almost a variation of his last opera in its testing of faithfulness and love. With its heavy Masonic iconography, its fantasy and fairy-tale silliness and inconsistencies, and in its abstracted and often undeveloped characterizations, The Magic Flute is more about the idea of love and its challenges than actually a tale of two lovers willing to suffer the trials and tribulations of physical and psychic attraction. The fact that in this opera Mozart has so abstracted love, along with its comic book-like and fantasy figures is obviously what makes this opera so attractive to children—or, at least, to parents who would wish their children might grow to love opera. The very fact that Tamino, chased by the dragon, falls in love with a picture of Pamina, as opposed to a real being is what makes this tale a voyage safe for the kids. Indeed, throughout the entire opera, the two lovers hardly have more than a few moments together, kissing only at the end—an end that represents, at least symbolically, a life after death—after all they have been silenced, tempted, burned to ashes, and tied to the ocean floor beforehand.

Even Papageno, the bird-catcher, who has a far more course vision of love than his compatriots, doesn’t get to kiss his Papagena until after both have been nearly consumed in an explosion—another kind of after-life  experience—that renders his and her vision of a heavy-populated household as sexually neutered. Papagena—at least in the LAOpera production I saw the other day—may be a highly sexual flirt (she appears in the production I saw as a mix of a cabaret stripper and a baton-twirling majorette), but by the time the couple gets down to their chorus of “Pa’s,” they have quite literally been burned. 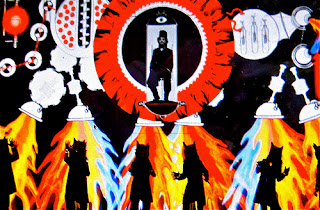 In short, Mozart and his librettist seem completely disinterested in their characters’ motivations, interactions, or even consistency. They are simply lovers who must undergo predetermined and quite inexplicable trials and tribulations to prove their worthiness for one another or evil monsters determined to get in the way. We easily comprehend why Don Giovanni takes to the streets: he is a womanizer in search of yet more lovers. We can well perceive why the braggarts Ferrando and Guglielmo want to test their lovers’ faithfulness. But we have little idea why—particularly given the spider-like manifestation of Pamina’s mother in the LAOpera production—Tanino has fallen in love or why, without really knowing him, Pamina responds in kind, going so far as to attempt suicide and, later, follow Tamino into the throes of death if not death itself. In short, all of the Mozart’s characters in this opera seem to exist in a kind of gap, are separate and isolate, never quite able to reach out to one another until the highly spiritualized ending. And I think this isolation of the opera’s figures also plays out in Mozart’s music as well. The dialogue passages which separate the opera’s arias help to further isolate the opera’s set pieces, some of which are obviously quite beautiful, but for me, at least, seldom coalesce.

Given the isolation of character and gaps of logic and plot of The Magic Flute, directors and designers generally fill the spaces with extraordinarily elaborate costumes and fabulous fairy-tale like sets which enchant audiences young and old and keep them from too carefully questioning and the why and where the characters actions and travels in their attempt to enter the temples of knowledge and wisdom. And in that sense, I have to admit, the LAOpera production I saw, based on the remarkable Komische Oper Berlin production  with direction by Suzanne Andrade and Barrie Kosky and animations and concept by the two-person group 1927, consisting of Suzanne Andrade and Paul Barrit, is definitely the most innovative version of the Mozart opera in years. 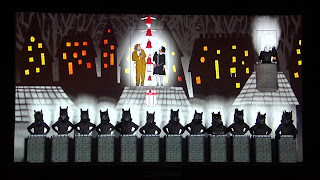 Their brilliant blend of animation and live-singers, discards the long dialogical interludes with something similar to silent-film intertitles, often presented in the flourished letterings of the first two decades of film-making, with the similarly outdated links of words such as “meanwhile…” or “on the other hand,” etc. But, fortunately, that is only the beginning of 1927’s involvement with animation. In this work, film is not projected upon a backscreen or front scrim as in, say, the recent MET production of The Nose but becomes part of the on-stage action itself, using the singers to create links between cartoon-like images borrowed from the entire history of cinema, from Westerns, horror films, and science-fiction pictures and their images to figures that might remind one of the paintings of Andy Warhol and Henry Darger. The monstrous Monostatos (Rodell Rosel) becomes a kind of Nosferatu, to Papageno’s (Rodion Pogossov) Buster Keaton. Pamina (Janai Brugger) is turned into a Louis Brooks and Perils of Pauline figure, while Tanino (Lawrence Brownlee) is turned into a sort of Harold Lloyd-like nerd. Birds fly across the stage, along with pink elephants (clearly a reference to Disney’s Dumbo), monstrous legions of slightly leashed dogs and the trotting and faithful bird-loving cat. The three boys who accompany Tanino and Papageno into the underworld are transformed into sweet-faced butterflies. When Tanino plays his magic flute, notes flutter across the entire stage, and with Papageno opens his box of magic bells, a whole chorus of young nymphets flutter about the proscenium as they were the performers in a Busby Berkeley number.

If at moments this can move a little too far in the director of Disney’s Fantasia, the work’s evil figures call up images that seem to salute the convoluted mechanical constructions of Monty Python and Gabe Ruberg. The terrifying aria wherein The Queen of the Night orders her daughter to kill Sarastro (Evan Boyer) becomes a horrifying series of images in which her spider claws turn suddenly into daggers pinning Pamina into the prison of her will. 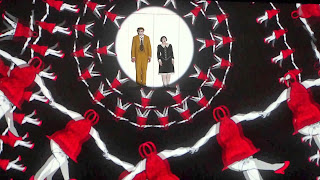 All of this energized image-making, in short, creates an often exhilarating and nearly always entertaining subtext to the opera’s music. The only problem is that in its stage-craft requirements that the singers take their places on the entire screen both vertically and horizontally of the stage, they are forced to stand upon small pedestals almost as friezes or, in the case of the three boys and three ladies in framed tableaus. Since they seldom can move through space, the actors seem even more separated and isolate from one another, only reiterating the problem of Mozart’s work. The brilliant interchanges between the “real” and the “imaginary,” moreover, merely remind us that Mozart’s figures are emblems of beings—lovers and evil forces—as opposed to psychological figures determined to explain and enact those emotions.

As a lover of artifice, of course, this does not truly trouble me. Mozart’s work, in this case, was never intended to be a psychological exploration of why people fall in love or try to defeat its forces. Leave that to somewhat like Bergman, whose The Magic Flute-influenced film I have previously described (see above). Here love, the lovers’ willingness to suffer its torments, and the knowledge that suffering rewards is as inexplicable as why Adam and Eve became determined to eat the forbidden “apple” which expelled them from their own magical lives.