Arrigo Boito (libretto, based on Shakespeare’s The Merry Wives of Windsor and King Henry IV), Giuseppe Verdi (music) / the production I saw was a live H.D. broadcast on December 14, 2013

As numerous musicologists and, in an intermission interview with Peter Gelb, as conductor James Levine and director Robert Carsen reiterated, it is amazing to think that the great composer of 19th century tragedies should have chosen as his last work to write this sparklingly antic comedy, paralleling indeed Shakespeare’s own trajectory. 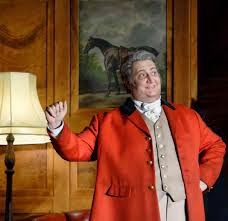 But it is also apparent that Verdi poured all his musical experience into this work, creating, throughout, ensemble works that literally shimmer with contrapuntal complexity, despite the rather straight-forward—and, at times, inexplicable—plot. At the center of work, obviously, is the mound of decayed flesh and quite filthy pig of a human being, Falstaff (performed with brilliance by Ambrogio Maestri). While he once may have been a slim man who dined with the King, in this work Old John, despite his desire and intentions of moving forward, is tired and poor, living in an outlandish mess of trays with left-over meals stacked with dishes and wine glasses. His dress, his room in the Garter Inn, indeed, his life is a mess, as he appears, at moments, to be sharing his huge bed with his two thieving servants Bardolfo (Keith Jameson) and Pistola (Christian Van Horn), who are nearly as physically disheveled as the rotund knight. Most importantly, the corpulent continent of flesh has run out of money, desperately needed if he is to continue celebrating the joys of life to which he has become accustomed. He reveals his solution to the problem to his servants: he will seduce two local Windsor wives, Alice Ford (Angela Meade) and Meg Page (Jennifer Johnson Cano), who, although they are commoners, are wealthily married and control their hubands’ coffers. He attempts to dispatch love letters to the women through Bardolfo and Pistola that very morning. Although their refusal to do so, and their sudden discovery of the word honor, is inexplicable, it sends the plot forward, as he tosses them out and they turn to Alice Ford’s husband as a kind of ridiculous revenge.

The rest of the opera might be described as a kind of revenge comedy, as the outraged women and Alice’s husband attempt to foil and punish the overweight knight’s ridiculous romances not once, but twice. In each case, Mistress Quickly (the glorious Stephanie Blythe) acts as go-between, seducing Falstaff into the belief that he truly has a chance to woo the women. 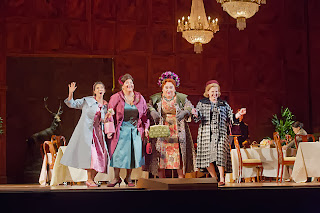 In between these absurd romances, Verdi and Boito insert the “real” romance between lovers Fenton (Paolo Fanale) and Nannetta (Lisette Oropesa), the later the Fords’ daughter whom her father wants to marry to the elderly Dr. Caius (Carlo Bosi). The merry wives, accordingly, need not only to fool and punish Falstaff but Ford (Franco Vassallo) as well.
How they achieve their goals, of course, is at the heart of the work’s antic comedy, involving the staples of farce, including hiding out in closets, ducking under tables, and implanting the hero within a huge, smelly laundry basket, as the entire ensemble rush about inn various directions as if they were in a Mack Sennett comedy. The final act, moreover, takes the action to a Shakespearean countryside where old wives’ tales and local folklore are combined with the whole town’s trickery to convince Falstaff that he is being hounded by fairies, nymphs, and ghosts, and to alter the intentions of Ford, allowing the ingénues to marry. As in Mozart’s Cosí fan tutte, everything turns out happily, even if in the madcap events, Bardolfo is also accidentally married to Dr. Caius. After all, as Falstaff, once he realizes he has been made an ass of, sings: “Everybody is fooled!”
Director Robert Carsen has quite appropriately set his version of this wonderful opera in 1950s England, a time of great upheaval in the English aristocracy, suddenly forced to sell their castles and marry wealthy commoners. The very issues of Shakespeare’s day—the radical changes in class and position—are quite nicely reiterated in brightly flowered dresses and candy-colored kitchens of the post-War II England.
This production was notable, moreover, not merely for the excellent performances of the entire cast, but the return to the director’s podium of James Levine, out for a few years because of back problems. Sitting at his stationary chair instead of joining the cast on stage, Levine surely seemed to the Met audience that he was now one of them! 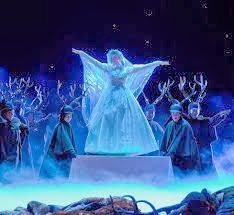 Despite all the on-stage revelry, finally, there was something, as some critics pointed out, terribly melancholy about this production, a revelation, perhaps, that Verdi’s final creation was also a wistful representation of the end an era when such outsized lovers of life were free to roam, celebrate, and devour life. As Falstaff fires back when he discovers that he has been once more tricked, “I am not only the source of wit, but the cause of it.” It is, after all, his outsized actions that have led to the complex machinations in all the others. Asked by Renée Fleming, during an intermission conversation, whether Falstaff actor Ambrogio Maestri (who has performed the work more than 200 times) felt Falstaff’s comeuppance was deserved, the rotund baritone answered, looking down upon his own girth and the pasta he has just prepared, shot back, “No!” As he himself makes apparent through his performance, how boring life would be without the world’s Falstaffs.