In 1913 the Futurist composer Luigi Russolo wrote, in his manifesto titled, L’Arte di Rumori (The Art of Noises):

Ancient life was all silence. In the nineteenth century, with the invention of the machine, Noise was born. Today, Noise triumphs and reigns supreme over the sensibility of men. For many centuries life went by in silence, or at most in muted tones. The strongest noises which interrupted this silence were not intense or prolonged or varied. If we overlook such exceptional movements as earthquakes, hurricanes, storms, avalanches and waterfalls, nature is silent.

Amidst this dearth of noises, the first sounds that man drew from a pieced reed or streched string were regarded with amazement as new and marvelous things. Primitive races attributed sound to the gods; it was considered sacred and reserved for priests, who used it to enrich the mystery of their rites…
At first the art of music sought purity, limpidity and sweetness of sound. Then different sounds were amalgamated, care being taken, however, to caress the ear with gentle harmonies. Today music, as it becomes continually more complicated, strives to amalgamate the most dissonant, strange and harsh sounds. In this way we come ever closer to noise-sound.

This musical evolution is paralleled by the multiplication of machines, which collaborate with man on every front. Not only in the roaring atmosphere of major cities, but in the country too, which until yesterday was totally silent, the machine today has created such a variety and rivalry of noises that pure sound, in its exiguity and monotony, no longer arouses any feeling.

To excite and exalt our sensibilities, music developed towards the most complex polyphony and the maximum variety, seeking the most complicated successions of dissonant chords and vaguely preparing the creation of musical noise. This evolution towards “noise sound” was not possible before now. The ear of an eighteenth-century man could never have endured the discordant intensity of certain chords produced by our orchestras (whose members have trebled in number since then). To our ears, on the other hand, they sound pleasant, since our hearing has already been educated by modern life, so teeming with variegated noises. But our ears are not satisfied merely with this, and demand an abundance of acoustic emotions.

So was “noise music” born, music that Russolo created, in part, through his creation of 16 noise-generating devices which called intonarumori, machines that through cranking devices created a series of high, middle, and low rumbling, growling, and other noises to which the performers added various cries, knocks, and other sounds, which Russolo categorized into six groupings:

None of the 16 original intonarumori has survived. But for the 100th anniversary celebration of Italian Futurism, the Performa 09 biennial, collaborating with the Experimental Media and Performing Arts Center (EMPAC) and the San Francisco Museum of Modern Art, invited composer-writer Luciano Chessa, the authority on Russolo and Futurist noise music, to recreate Russolo intonarumori, representing 8 noise “families,” of 1-3 instruments each. Under Chessa’s direction the instruments were reconstructed by Keith Cary in Winters, California. A concert premiered at the San Francisco Museum of Modern Art on October 16, 2009, traveling to New York City for the Performa 09 presentation at Town Hall. In September of the next year, Chessa directed a concert in Italy at the Museum of Modern and Contemporary Art of Trento and Rovereto in Roverto.

This past weekend, with my friends Martin and Rebecca Nakell, I attended a new concert at Roy and Edna Disney/CalArts Theater (Redcat) at the Walt Disney Concert Hall in Los Angeles, by coincidence sitting next to our mutual friend publisher and writer Tosh Berman. 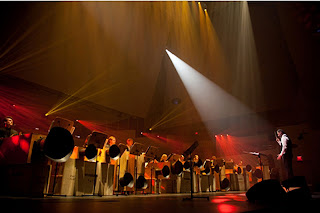 The concert began and ended with Russolo fragments from his Risveglio di una città (Awakening of a City), first performed in April 1914, which resulted in a riot. Today these pieces seemed hardly so revolutionary, but were highly and politely applauded by the standing-room only audience. Fortunately, the rest of the concert was devoted to new compositions from 2009 to the present, including works by Blixa Bargeld, Gregory Moore, Theresa Wong, Annie Lewandowski, Ellen Fullman, Luciano Chessa, Ulrich Krieger, Joan La Barbara, and Mike Patton. All were fascinating, although somewhat repetitious of the others. The most outstanding of them included, Gregory Moore’s Eight Moments, a kind of salute to the solfeggio, based on the classic “Do Re Mi” exercises. Theresa Wong, along with Carmina Escobar, sang her beautiful composition, “Meet Me at the Future Garden” of 2009 with its shimmering suggestions of a primordial forest.
One of the most outstanding of the performed works was Annie Lewandowski’s composition of 2013, “Do You Burn?” a work named after the musical group powerdove’s release of this year. At this premiere performance Lewandowski both sang and played the santur (an Iranian hammered dulcimer), creating a kind of lush composition of repeated phrases with only slightly differing alterations:

Surely the most musically impressive of these new works was the aria from director’s Chessa’s own ongoing composition of the opera, Vathek, based on the late 17th century fiction by William Beckford. The 2013-composed aria, beautifully sung by tenor Timur Bekbosunov, represents a brutal cry as the character of Vathek contemplates the chasm of nothingness:

Neighboring wailing
these mothers’
embellishments weigh
on my grey matter.

The most comically delightful of the pieces was Joan La Barbara’s very funny and charming “Striatrions” of 2009. With a large, acoustic megaphone, the noted experimental singer, perhaps best known through her Joan La Barbara singing through Cage (who I met years earlier when she performed in the living room of music maven Betty Freeman), one by one, takes on the various noise intoners, crackling, growling, and creaking in what seems like a low baritone voice in response the sounds of the noise machines. A bit like a high school cheerleader, La Barbara cheers on several of the intonarumori by flattering them through imitation. Her performance, in particular, was received appropriately with hoots, howls and the thunder of audience applause. La Barbara, I was happy to read in the program notes, is also composing a new opera.
All in all, this performance of The Orchestra of Futurist Noise Intoners demonstrates that music as noise, filled with beauty and wonderment, is alive and strongly surviving.