working against love
by Douglas Messerli

Miklos Laszlo Illotszertór (Parfumerie), translated and adapted by E. P. Mowdall (from the English translation by Florence Laszlo) / the performance I saw was at the Bram Goldsmith Theater in the Wallis Annenberg Center for Performing Arts, Beverly Hills, California, November 30, 2013

The new Bram Goldsmith Theater in Beverly Hills’ Wallis Annenberg Center for the Performing Arts is stunningly beautiful, as well as the set for its first theatrical production,  which I attended this past Saturday. The play, opening just before Christmas, seemed a perfect selection for the new Annenberg complex, in part because a big element of this play concerns Christmas shopping at a Budapest shop, and the film version of Hungarian Mikos Laszlo’s 1937-based play, The Shop Around the Corner, remains one of most popular of Lubitsch’s cinematic comedies; the musical version of this work, Jerry Bock’s and Sheldon Harnick’s She Loves Me, happens to be one my favorite Broadway musicals of all time, whose New York revival I saw in 1994. Other versions of this play, the movies in the Judy Garland vehicle In the Good Old Summertime and You’ve Got Mail—if not as wonderfully crafted—also attracted large audiences. What a wonderful opportunity, it seemed to me and others, to see the ur-version of this popular work. 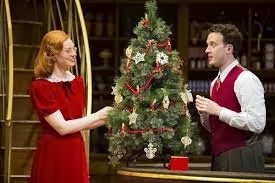 Too bad that the original play, at least as adapted by E. P. Dowdall, a nephew of the original playwright, falls so flat. While Lubitsch honed in on the details of character, differentiating the eight employees of Miklos Hammerschmidt’s perfume parlor, Laszlo’s version flattens their personalities. Indeed nearly all the employees of this shop keep secrets from one another that show them up to be self-centered and somewhat unlikeable. The caddish Steven Kadar (Matt Walton) is having a not-so-secret affair with Mrs. Hammerschmidt; Ilona Ritter (Cheryl Lynn Bowers), previously Kadar’s love interest, has a more-or-less permanent fiancée whom she suddenly and inexplicably, marries before the second act as she disappears from the play. The young delivery boy Arpad Novack (Jacob Kempt) is not only incompetent but an inveterate gossip and a dangerous bicyclist, whose aim is to become a clerk. The play’s two central figures, Amalia Balash (Deborah Ann Woll) and George Horvath (Eddie Kaye Thomas), are selfish, unaware lovers who cannot even recognize in one another as their secret correspondents, and spend their working days demeaning one another. Even the somewhat nebbish elder clerk, Sopos (Arye Gross) later admits that it was he, to protect his job, who wrote a note to his boss revealing that Mrs. Hammerschmidt is involved with one of the staff.  Hammerschmidt suspects George is her secret lover and in irritated vengeance fires his most trusted employee on the first day of this drama. Only Miss Molnar and Arpad’s replacement Fritz seem to have no secrets to reveal, but then they are so one-dimensional that they hardly exist. In short, there is something so dislikeable about these figures (as opposed to the movie and musical wherein even rakish Kadar is fairly loveable) that after a few moments of conversation we lose interest in their machinations. The workers of Hammerschmidt’s Parfumerie, alas, if very human, are very sympathetic figures.
All of this might have been ameliorated if the cast could bring life to their roles through their acting skills. It may have been that in the balcony where I sat the acoustics were just not that good, but it seemed more likely that this semi-professional cast were just not up to the demands, disclaiming their lines without great commitment to their characters.
Despite the stunning set (by Allen Moyer), moreover, director Mark Brokaw brought little creativity to their movements across the stage, using his actors primarily to bring various articles in and out of drawers only to take those same objects, soon after, away. The large, highly polished, horseshoe counter at the center of the stage was used less as a spot where they might occasionally converge than as a kind of container in and out of which the various salespeople moved for no apparent reason. The richly brocaded settees were employed more for a placement of perfumed candles than as spaces in which characters might sit upon and share their little communal gossipy. Perhaps this was all intentional, suggesting their own illogical efforts at communication and purposefulness, but, in the end, their aimless actions proved simply distracting. The play, after all, eventually depends on their pausing to reflect—and join in camaraderie.
Finally, the play itself becomes utterly lethargic as we learn, early on, the work’s major secret: that Amelia and George are unknowingly in love, while the film and musical waited until at what might be described as the second act to allow Georg/Geroge to discover that fact with a visit to a café in the film and to a gypsy nightspot in She Loves Me. In this original version, alas, the suspense upon which the work depends is missing, as George passively refuses to reveal the situation to his postbox correspondent, the play, accordingly, stuttering into puttering repetition. Little in this version seems to mean anything of consequence. Even Mr. Hammerschmidt ultimately gets his wife back, despite her atrocious behavior. Everybody, by play’s end, gets their desired bonus. Although the young Arpad is denied a desired motorcycle in the play, he is pleasurably dragged off to dinner with the Hammerschmidt family. In the film, while the Arpad character has already moved on to a date with a woman, the homeless and overwhelmed Fritz (Rudy in the movie) is rightfully awarded dinner with Mr. Maraschek (the name given boss in the cinema-version). It is these little, sometimes sentimental, tweaks in the story that make all the difference.
Certainly there are moments in this work when the character interrelationships momentarily elevate the play into something—as my friend Perla Karney, whom I encountered after in the lobby, described it—“sweet.” Sipos’ fatherly advice to the young George is often engaging, as is his eventual feeling of guilt for having initiated the series of events which culminates in Mr. Hammerschmidt’s attempted suicide. Although he could not match the comic bluster of the film’s Frank Morgan, Schiff’s Hammerschmidt, at times, does nicely convey the saddened confusion of a man who, in his devotion to his job, nearly loses his wife. And the final scenes between George and Amalia (Thomas and Wolf) are touchingly exhilarating as they both suddenly perceive that behind their perpetual spats was love rather than belligerence. And we know, at heart, that Laszlo’s play is a gentle love story of a world gone by. It’s just too bad that this “original” Illotszertór couldn’t live up to the expectations created by its various reincarnations.