Douglas Messerli | "Chance and Chemistry" (on Swerling's, Burrows' and Loesser's Guys and Dolls)

chance and chemistry
by douglas messerli

Jo Swerling and Abe Burrows (book, based on stories by Damon Runyon), Frank Loesser (music and lyrics) / The production I saw, based on The Oregon Shakespeare Festival Production, was performed at the Wallis Annenberg Center for the Performing Arts, Beverly Hills, California, at the matinee of
December 20, 2015

After seeing my third stage production of the renowned Frank Loesser musical, Guys and Dolls, and after watching the Marlon Brando, Jean Simmons, Frank Sinatra, and Vivian Blaine film version dozens of evenings, I almost passed on reviewing my most recent viewing at the Beverly Hills Wallis Annenberg Center for the Performing Arts. I wish I’d been writing these cultural memoirs when I saw the famed 1992 Jerry Zaks-directed production in New York, certainly the best version I’ve witnessed to date, if for no other reason than the great Faith Prince performed the character of Miss Adelaide, with the bouncy Nathan Lane as her marriage-phobic lover. 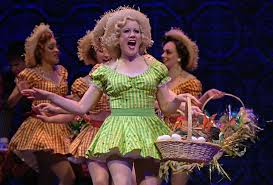 Although I remember my pleasure at the time of seeing it, I recall little about the earlier, all black cast-production Howard and I saw in 1976 or 1977 at the National Theater in Washington, D.C.
Vivian Blaine and Stubby Kaye were the stand-outs of the film rendition, but, obviously, you can never ignore Frank Sinatra—even though Nathan Detroit was one of his least memorable roles. And Brandon and Simmons are unforgettable if for no other reason that the film actually allowed them to sing their own songs. Brando, in a sweet tenor voice, almost gets away with it, and Simmons summons up enormous courage in her renditions of “I’ll Know” and “If I Were a Bell.” I can tolerate the shift from “A Bushel and a Peck” to “Pet Me Papa.”  But I miss the full rendering of “My Time of Day” and the songs “I’ve Never Been in Love Before,” “More I Cannot Wish You” and “Marry the Man Today” in Joseph L. Mankiewicz’s cinematic adaptation—even while I recognize the last named number is one of the most sexist songs of our entire Broadway musical history.


It’s not that my most recent viewing, a production directed by Mary Zimmerman, first presented by The Oregon Shakespeare Festival, is not worthy. As Zimmerman herself notes in programme commentary, the musical is so near-to-perfect that it is hard to imagine an utterly failed production; even high school and amateur reinterpretations are inherently loveable. The music and, particularly, the lyrics, to say nothing of the larger-than-life character types of Damon Runyon’s stories as captured in Jo Swerling’s and Abe Burrows’ book,* are so perfect that they almost sing and play themselves. And the Oregon production is by no means amateurish.
If this production’s choreography by Daniel Pelzig leaves something to be desired—wherein the first scenes of the musical are played out simply by moving the small cast in various zig-zag patterns across the stage so to suggest the busy New York streets, and which delimited the remarkable original Michael Kidd narratively sprawling free-for-all during the song “Guys and Dolls” into a vaudevillian duet between Benny Southstreet and Nicely-Nicely Johnson—it redeemed itself sufficiently in the leaping antics “The Crap Shooter’s Dance” of act two.


I might also have done without the small scale models of the New York City sky-line hauled in and out a various moments (a simple appropriate backdrop or projection might have created the locale much more simply), and the tossing out of dozens of beach balls hardly seemed to recreate the Havana of my imagination; but in scenic-designer’s Daniel Ostling’s use of simple chairs and tables to create most of the newspaper and shoe-shine stands, and an easily moveable front facade for the “Save-the-Soul” mission worked just fine as a kind of deconstruction of what some previous productions turned into too-busy moments.


Despite these these few problems in dance and scene, moreover, the cast completely made up for it. Indeed the entire chorus sang quite admirably, and the leads—Jeremy Peter Johnson as Sky Masterson, Rodney Gardiner as Nathan Detroit, Kate Hurster as Sarah Brown, and, in particular, Robin Goodrin Nordli as Miss Adelaide and Daniel T. Parker and Nicely-Nicely Johnson, were more than capable and often soared in their performances. Both Nordli and Parker knew how to carry their over-their-top characters to the very edge of slapstick and still make these stick-figure-characters somewhat believable in their crowd pleasing, show-stealing numbers, “Adelaide’s Lament” and “Sit Down, You’re Rocking the Boat.” Johnson blended his strong voice gently with Hurster’s slightly frail upper octaves in “I’ve Never Been in Love Before,” while both singer-actors let go in the lower registers of her “If I Were a Bell” and his “Luck Be a Lady Tonight.” And for one of the first times in my experiences of this work, Gardiner sang and danced in way that totally enlivened the usually whining and passive character of the desperate organizer of gambling venues, Nathan Detroit. Finally, one comprehended, why Adelaide might love him!


Even though I missed the full resonance of a normal pit orchestra, given the valiant musical orchestrations of the eight musicians—playing piano, reeds (3), trumpet, trombone, drums, and bass only—music director Matt Goodrich is to be equally commended. You know the singers and musicians are doing right by the music when, during the intermission, several Beverly Hills businessmen are still humming the musical’s songs as they make their way to the men’s room and continue therein.


So what if the play’s central concept—that Runyon’s irascible, hard-talking, gun-packing hoodlums are secretly seeking, despite their personal resolves, the American dream their dolls have cooked up for them—is hard to swallow? So what if this tale takes us to the very edge of credibility in laying open its heart to the possibility of a loose-living gambler falling in love with a strait-laced lady missionary and actually joining her Salvation Army? It’s just a matter, so the work argues, of chance and chemistry—which surely are the very two elements that probably made Loesser’s musical fable one of the most memorable works of the American theater.
And with those very elements, Guys and Dolls truly gets to the heart of both American innocence and its attraction to violence. Should we be surprised, really, that the religious should be naturally drawn to the evil of our society, that all reprobates are naturally attracted to those who claim moral superiority? When you can claim you’ve “gone straight” by avoiding convictions for 38 arrests, why shouldn’t everyone applaud? After all, we know our justice system is “the very best in the entire world!” Just ask the musical’s totally perplexed Lieutenant Brannigan, whom we meet again, alas, in West Side Story’s Officer Krupke seven years later—albeit under far more serious circumstances.

*A controversy remains still today about how much of the original Jo Swerling script remains in the final version. Some argue that Abe Burrows completely rewrote the book, others, such as Sweling’s son, that he merely revised the original.

Posted by Douglas Messerli at 7:03 AM No comments: