the awakened emperor
by Douglas Messerli

Eugene O’Neill The Emperor Jones / performed by The Wooster Group in a video of 1999, stage performances in Hong Kong and Chicago in 2009, and early work-in-progress performances in New York from 1992
It will be hard for many theater-goers, surely, to watch any version today of Eugene O’Neill’s early success, The Emperor Jones. Not only is a the central figure, Brutus Jones, presented as a vain and foolish black who has temporarily hood-winked the citizens of a Caribbean country, but he speaks in a dialect right out of minstrelsy, that uses the “n”-word too many times to count. The first few sentences out of Jones’ mouth says it all:
Who dare whistle dat way in my palace? Who dare
wake up de Emperor? I'll get de hide frayled off some
o' you niggers sho! 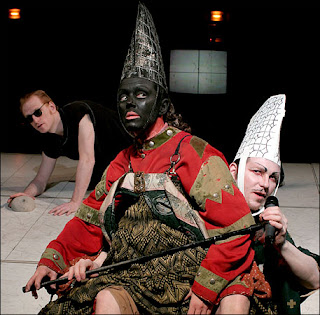 The Wooster Group production from the 1990s and the early years of the new century, at least saved its audiences from having to spend an hour with this wincingly painful language coming out of the mouth of black man; in their production, a woman, Kate Valk, plays Jones. But she does so, dressed in a garish imitation of a Japanese emperor’s robe like something out of The Mikado, while in blackface.
It’s almost as if Wooster director, Elizabeth LeCompte, were taunting the liberal and conservative correct-thinking fates. Surely the NEA critics of Reagan’s day might have had a hissy-fit if they’d seen this show.

Miraculously, however, the Wooster group and Kate Valk, in particular, have created a work that not only questions the very values of O’Neill’s original, but that actually touches both our intellects and our hearts, partially restoring the intentions of O’Neill’s original. By layering the various levels of white bigotry that has made Brutus Jones such a self-destructive being, we discover his real humanity sometimes hidden by both the original text and the theatrical interpretations of such a figure. Valk majestically takes on this character with all the crazed enthusiasm of the characters in Jean Genet’s The Blacks, and in her interchanges with the sometimes garbled video presentation of (his) white “partner,” Smithers (William Dafoe in the video version and Scott Shepherd and Ari Fliakos in stage versions) speaking an equally exaggerated Irish brogue, reveals his knowledge that any royalty bequeathed him is only temporary.
Jones, in Valk’s performance, may be a con-man, even a brutal dictator, but unlike so many of real-life strong-men, he is no liar and is not self-deluded: he admits he has only taken on his role to get the money. His fate, in short, has predetermined the greed of the white men and women who behind the ridiculous wardrobe and paint to which sacrificed his reality.
The decision to have Jones played, accordingly, by a woman in blackface is brilliant in its Brechtian positing of that character. But to successfully navigate the obvious pitfalls of the language you need the brilliance of someone like Valk. 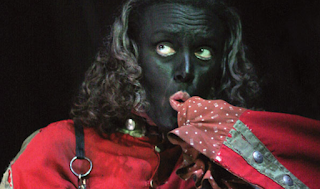 Hooting (“Hah-Hah-Hah,” in seeming imitation of Marlon Brando in A Streetcar Named Desire) and hollering, by turns; seriously terrified by his fate and comically mocking his whole ridiculous “reign,” the Emperor of this work runs the gambit of emotional expressions. Valk is at once a peacock and a wide-eyed child-on-the-run, terrified of being caught and lynched. His own myth, that he can be killed only with a silver bullet, makes him a kind of vampire, which, in fact, he has been playing, sucking the blood from his own kind.
If Valk’s performance, as Charles Isherwood, has argued in The New York Times is legendary, she is supported fortunately by excellent company actors in Dafoe, Shepard and the multi-gifted Fliakos, but by the memorable costumes and the delicious score of composter David Linton.
LeCompte’s eccentric direction is not to be ignored. It’s hard to explain it, but a short dance by the Emperor and his hit-man Smithers, in which they enact a kind of synchronized Kabuki mime, brought tears to my eyes.
The video which I watched was first shown, apparently, in 1999. But the same DVD contains performances from 2009 at Chicago’s Goodman Theater and the Hong Kong Arts Festival, as well as early work-in-progress performances at The Performing Garage in October 1992. I preferred the taped performances to Christopher Kondek and Elizabeth LeCompte’s video. Both the Goodman Theater and Hong Kong performances were wonderful, but perhaps because of the needs of the audience, Valk more clearly enunciated her words in the Hong Kong performance, giving the role much more clarity. But perhaps, having by then seen so many versions, I simply heard it with more comprehension. Seeing this production so many times, however, is a reward for anyone truly interested in American theater.

Douglas Messerli | "The Same but Different" (on Janet Schlapkohl's My Sister)

the same but different
by Douglas Messerli

Janet Schlapkohl My Sister / Los Angeles, Odyssey Theatre / the performance I attended was the matinee on March 6, 2016

First presented in a shorter version at the LA Fringe Festival, Janet Schlapkohl’s play My Sister played January through March of this year, with its production recently extended, at Los Angeles’ Odyssey Theatre. 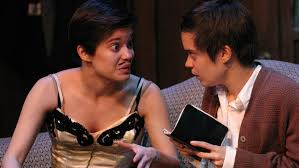 Schlapkohl’s play is set in the Berlin of the 1930s, so one can be assured that it is a story involving Nazi Germany. However, in this case the central (and only on-stage) characters are not Jewish nor have they been intentionally undermining Hitler’s Nationalist Socialist government. Indeed these two provincial twins, Magda and Matilde—wonderfully performed by two real-life twins, Elizabeth and Emily Hinkler—have come to the capitol to free themselves from country restrictions, hoping to perform (in Magda’s case) and to write (in Matilde’s instance). Indeed Magda, the less intellectually endowed of the two, seems quite comfortable at moments with the rising anti-Jewish sentiments and the introduction of Hitlerian Eugenics at the hospital where she works during the days as a cleaning woman.


Despite their lack of food and finances, however, they might have survived the impending war—in fact, Magda does. The only problem is that the more perceptive of the two, Matilde, is disabled, crippled, with her left arm frozen into upright position. Any attempt to move it takes all her concentration and muscular power. It is Matilde who writes the comic skits that Magda has just begun to perform at a local lesbian cabaret.
As the days pass, however, Hitler’s government increasingly creates new rules that begin to close down the cabarets and make performing any kind of humor more and more difficult. Matilde, who, unlike her sister, can speak English and who listens all day long as she sits in their apartment to her beloved radio, begins to realize the increasing dangers, and tries to instill what she perceives into her sister’s thinking. Magda, however, does perceive the dangers if she were actually to repeat all the jibes and jokes that Matilde has written for her to perform, and waters-down some of her material.
And even Magda gradually begins to perceive the difficulties of surviving, particularly after she discovers that the vans presumably taking some of the disabled patients to better facilities are actually transporting them to their deaths. The sudden disappearance of one of her favorite child patients devastates her as she is forced to “pay attention”—a problem she has evidently had all through her childhood education—recognizing that her beloved sister is now in danger, particularly since the apartment manager, who knows of her condition, has himself become a Nationalist Socialist supporter.


She is ready, in fact, to give up any career aspirations, despite the fact that she may be auditioned through her act for an a film role in one of Goebel’s movies; but Matilde insists that she continue in perusing her dreams. Since the government has now banned post-war radios, Magda insists that she also take away Matilde’s one source with the world outside, as she heads off to the performance.


Presumably, it is the loss of that connection with the world that forces the disabled girl to attempt to follow her sister to the theater.
While Magda begins to present the skit, to an audience now filled with Nazi soldiers, she shifts entirely away from her original satire, singing, instead, a German folk song in which the soldiers join in singing.
At that very moment, so we are told by Magda in a postlude, Matilde has taken a fall down the stairs without actually hurting herself; nonetheless she is taken to the hospital and ferried way either for experimentation or extermination before Magda can even reach the hospital.


If the ending, given Matilde’s seemingly rash decision to leave the apartment, seems somewhat contrived, we nonetheless know that eventually someone would have come to take away the “imperfect” girl. Moreover, how might she able to survive for so many years in such complete isolation? In such a fascist world, it is apparent, everyone’s dreams were dashed and people were destroyed for simply being different from others, a particularly ironic statement given that the two women are, in reality, identical twins.