Last performed in Los Angeles at Rogue Machine Theatre in 2014, Gruesome Playground Injuries has been revived in the current Hudson Theatre performance, staring Sara Rae Foster and Jeff Ward, which again demonstrates the power and limitations of Joseph’s writing.
Unlike his excellent Bengal Tiger at the Baghdad Zoo (see My Year 2010), with its international scope of war and general madness, Gruesome Playground Injuries is a small play that turns inward, focusing on just two figures, Kayleen and Doug, over a period of 30 years. 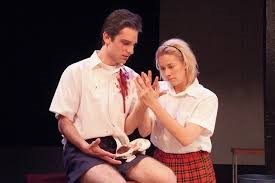 As classmates in a Catholic school they first appear to actually communicate with one another at the age of 8, when Doug, a daredevil child has split open his face after riding his bike, Evil Knievel-like off the school roof.
Like many children after playground injuries, Doug brags about his bloody encounter to Kayleen, claiming it doesn’t much hurt, etc. It is an almost insignificant encounter, except for the fact that he asks her to touch the wound which seems to help relieve his pain and begins a kind of gentle relationship between the two.
At age 23, however, when we next see them together, the accident-prone Doug has blown-out his eye which will force him to wear an eye-patch for the rest of his life. Once more the two talk insignificantly, but the very meeting seems almost to rejuvenate the suffering young man.


Throughout the rest of the play, the two meet at various ages, rocking back and forth in time, as each of them fall prey to accidents and, in Kayleen’s case, intense stomach problems, self-loathing, and body-cutting. Both seem so victimized—both by others and themselves—that they vomit over the slightest of causes. Doug loses a tooth in a fight with another student over Kayleen, is struck by lightning and almost dies, and ends up in a wheel chair after having returned to the empty-school after it was mostly destroyed in an explosion. Kayleen continues with her stomach problems, self-cutting, and, finally, her attempt to rip out her own stomach. Each time, after a period of years, they find themselves on each other’s doorsteps, offering strange healing powers to one another, without being able to truly express their own love.
We can understand some of Kayleen’s difficulties: her mother has left home early in her life, and her father clearly detests his daughter. Yet Doug’s slow self-immolation is a bit more difficult to explain. His mother seems like a typically kind Midwesterner who, upon the death of a loved one or another emergency, immediately brings “over a casserole.” Perhaps it is the very ordinariness and unimaginativeness of his home life that leads him to take such reckless actions.


In the end, however, neither of them can truly break down the walls they have built for themselves, as director John Hindman writes, to keep out the rest the world. Only in their final encounter, a playlet titled “Zamboni,” when both are 38, do we see any possibility that they might have finally learned how to live together; but even then, by that time they have been so damaged that we are not certain that they can truly heal each other, since both have winnowed down the possibilities of their lives.
If nothing else, they have shared a sporadic relationship, entering in and out of their lives—despite other boyfriends and fiancées—to offer some solace to one another, even if the brevity of their visits cannot sustain them for long.
One can imagine, in other hands that a kind of sentimentality, as that of Arthur Laurent’s film The Way We Were, might have easily crept into the script. But Joseph, although using a similar, “the years go by” kind of structure, while resisting a chronological pattern, allows the audience to gradually begin to comprehend their odd relationship without becoming deeply invested in any romantic intentions.


Yet that is also one of the problems of the play. We find it difficult to truly care about these fragile and somewhat crazed figures: Doug is a “retard,” Kayleen is a kind of “skate”—names they throw at one another. This is reinforced by the fact that the character of Kayleen is passive, and Foster plays her more as she were reciting her lines rather than acting them. Ward, a far more theatrical  performer is almost recklessly expressive, as is his character. And it is just radical differences between the two that make us wonder why they are so continually drawn to one another. Perhaps it is only because they are so broken, Kayleen spiritually and Doug physically, that forces them forward to their temporary healing sessions.
If Gruesome Playground Injuries, accordingly is not a great play, is an interesting one, demonstrating some of Joseph’s many writing talents in presenting characters trying to survive in a world so ready to destroy them.