Los Angeles playwright, Tom Jacobson’s new play, Captain of the Bible Quiz Team, is about the collapse of the small Kandota Lutheran Church in Little Sauk, Minnesota—or perhaps we should say that it is about the end of numerous such churches, since in writing this lovely work, Jacobson interviewed eight ministers nationally, all of whose churches were radically effected when in 2009 the Evangelical Lutheran Church in America (ELCA) voted to welcome the LGBTQ community into their ranks not only as members of the church but as pastors as well. 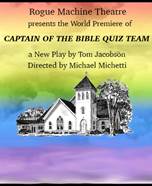 Jacobson’s play, with the major role of Landry Sorenson alternating between four actors (two of them women, one black male, and white male; the performance I saw was with Mark Jacobson, no relation to the playwright) takes place in a number of Lutheran churches throughout the city (the performance I saw was at Jacobsen’s own church, the gay friendly Lutheran Church of the Masters in Los Angeles) with a real organist, a program that mimics Sunday Church bulletins, and with the audience itself serving as interactive congregants. Like Thornton Wilder’s Our Town, some audience members were asked ahead of time to take on small roles throughout the play, and at the end, each attendee was named and asked to stand in a final act of unexpected support for the young preacher—not yet ordained as a full pastor—who has just declared he has lost his faith.
Sorenson is the son of the full-time Church’s minister, who has suddenly been hospitalized and is near-death for much of the play. The young preacher, accordingly, comes back to his home-town to bear several burdens: to nurture a basically conservative, mostly Scandinavian congregation, back to health, while simultaneously caring for a dying father whom he has strongly displeased with his collegiate and after activities. He has already told his son, in no uncertain terms, that he does not feel he is fit for the ministry, and throughout his dying he refuses for much of time to even acknowledge his presence.
The young Sorenson, in his mix of high idealism and his often rambling seven sermons (Christmas Eve, December 2009; Epiphany, January 2010; Baptism of Our Lord, January 2010; Ash Wednesday, February 2010; Maundy Thursday, April 2010; and Good Friday, April 2010), is hardly a fit for a community that is certain to have heard highly structured homilies for most of their lives. But most of all is his dangerous tendency, as he claims was the pattern of the Lutheran founder, Martin Luther himself, to question everything, including the veracity of Bible stories and the fundamental values of his congregants. And, in that fact, this work reminds me some of Robert Bresson’s far greater The Diary of a Priest (see My Year 2000).
Although he makes some important new changes, including establishing a needed food bank in conjunction with other community churches, and even slightly increases attendance, he further grates on many churchgoers by revealing personal information about himself and his relationship with his father, and, finally, admitting that he himself has fallen in love with another man (in the production I saw, the supposed lover was represented as a black man). Members of the congregation retaliate by interrupting him mid-sermon with written messages, arguing for succession from the ELCA because of its decision on the LBGTQ inclusion and proposing Sorenson’s own termination—in particular for his tossing away an ancient couch in the church basement—a couch which as a child, he had often slept upon.
Even worse, Sorenson discovers some secrets in his own father’s closet: most notably, the fact that, in an attempt to build a pastoral house next the church years earlier, he had taken out a loan in the name of the church, which was never paid back. The church must now attempt to free itself from the larger ELCA simply in order to not be closed down.
A true believer at heart, however, Sorenson seems to meet these dilemmas with an open mind and a calming heart. But when his father dies, still refusing to even speak to his son and his lover, the young preacher finally begins to break, his sermons becoming even more personal as he speaks of his own spiritual crisis. The only meliorating fact is that his father has left the family farm to the church, and its sale may pay off the church’s debt; the son has been left nothing. But even here, he proclaims, beneficently, that at least his father has given him his faith; what better gift than that, he proclaims.
By the final Easter Sunday sermon, however, the minister admits his loss of faith, not of God, apparently, but of his fellow beings. The narrow-mindedness and hostility of the congregants themselves has seemingly defeated him. Yet another audience member walks forward with a written message, and the genial Sorenson, quipping on these now regular intrusions, braces for the worst.
But this time either God or the men and women to whom he has been preaching—Jacobson has left the answer vague—has wrought a true miracle, as the audience members’ names are called out and we all gradually stand up to ask him to create a new church in the living room of one of our supposed members—an act much like ancient Christians who gathered to confess, in just such small, hidden-away locations, to one another. The questions Sorenson has pummeled them with have finally found their way into the minds and hearts of his congregation. 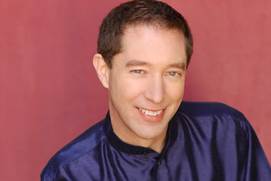 I am what you might describe as a cynical non-believer (I too, however, was brought up as a Lutheran before my family turned to the Presbyterian Church—which I am sorry to say took even longer than the Lutherans to accept the LBGTQ community). I didn’t even bother to attend the Jello-mold party next to the church at play’s end—although I did sing along with the well-known hymns before each sermon.
Yet there was something moving about being asked to turn to our fellow audience members (as church-goers are often encouraged to do) to shake their hands and, mid-play, express our love to one another. In an odd sense, this simple act was perhaps one of the most dramatic moments of this “play” simply because it questioned what theater actually is and was always, a bringing together of a temporarily sharing community to listen, question, challenge, and react. That acknowledgement of one another’s presence seems to be an important element missing in so much of today’s drama. And for many of millions, that dramatic interchange is what draws them still to church.

For a performance by Peter Allen of "I Go to Rio," click here:
https://www.youtube.com/watch?v=FCYxTg6svXg 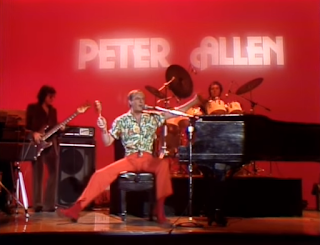 Posted by Douglas Messerli at 12:47 PM No comments:

David Greenspan Go Back to Where You Are / Los Angeles, Odyssey Theatre Ensemble, the performance I saw was on Sunday, August 14, 2016

Playwright and actor David Greenspan’s 2011 play, Go Back to Where You Are, now running at Los Angeles’ Odyssey Theatre Ensemble, is a breezy, seaside play that might remind one of Chekov’s The Seagull—if it weren’t for the fact that this author’s works make no attempt at all to create an illusion of reality. As director Bart DeLorenzo notes in a program: despite being “set beside the ocean, following the playwright’s request, you will hear no waves crashing tonight, no seagulls overhead. When night falls, we will have no recorded crickets.” And despite the fact that one character, Bernard (Justin Huen) speaks endlessly of the birdlife on Long Island, we see and hear no birds.


Indeed, Bernard begins the play commenting, as the playwright, “This is kind of a weird play”; and throughout characters, as in Eugene O’Neill’s Strange Interlude, take time out to speak asides to the audience. Some figures stand in frieze while others come and go. And one character, improbably sent by God from ancient Greece, who admits to the uncontemporary moniker of Passalus (John Fleck), also transforms himself from time to time into an elderly female actress, Mrs. Simmons, allowing for the actor to quick switch personas and demonstrate his acting skills. Fleck was excellent in the role, but I would have loved to have seen Greenspan himself, one of New York’s very best actors who has often done female impersonations on stage, act the role as he did in the 2011 Playwrights Horizons production.


The occasion for this get-together of odd characters is the birthday of Carolyn, a figure who, inexplicably, never makes an appearance and who, we’re told, cooks the meal which the characters share. At the center of the get-together is Carolyn’s highly thea-ater-proclaiming mother, Claire (Shannon Holt), who is about to star as Arkadina in The Seagull, a role, for those who recall, of great hauteur and self-centeredness, that matches her own behavior as throughout the play she negatively evaluates her friends to their faces and behind their backs. She’s invited her younger brother, who lives in a small beach house nearby—the “obscure” playwright and author of the piece we’re seeing, so he claims—her unconfident and self-loathing actress friend Charlotte (Tracy Winters in the performance I saw), her unhappy son (Andrew Walke) who’s just returned from Los Angeles after the death of his gay lover, and her director Tom (Bill Brochtrup) and his set-designing lover Malcolm (Jeffrey Hutchinson), who also stands in for God. As in Chekov’s drama all of these characters—with the exception, perhaps of Claire—feel inwardly thwarted and unloved; but even Claire is to be pitied, since during the party she receives a phone call telling her that she has cancer which will kill her, so Bernard tells us at play’s end, within the year.
It is Passalus’ job at this event to guide the invisible Carolyn on a happier path of life, and he is warned by God not to interfere with any of the others’ lives. But Passalus, who recounts his own unhappy love affair back in Ancient Athens, simply cannot resist, particularly when he hears all their inner thoughts and falls in love with the tender nature-loving playwright. Before this witty 1-hour play comes to an end—alternating between the elderly Mrs. Simmons and himself— he’s sent Claire’s young son, Wally, packing back to LA to find new love and life, sets Charlotte right about her true talents, and temporarily, at least, patches up Tom’s and Malcolm’s failing relationship, as Tom promises to stop playing around with the chorus boys. For his busybody intrusions, God punishes him to continued life—which like Malina Makropulos of Janáček's opera The Makropulos Affair—he’d hope to finally to free himself. But what the heck, he’s fallen in love again and, more importantly, the sensitive Bernard has fallen in love with him. As Bernard finally perceives, instead of almost trying to move ahead of oneself or falling into the errors of the past, you should “go back to where you are,” a phrase that seems almost like a variation of Voltaire’s command to “tend your own garden,” or, put another way, to live fully in the present.
For such a short work, Greenspan’s play reveals a profound interconnection between dream and reality, between past and present, despair and possibility, and


repetition and creation. Writing of the original production, The New York Times critic Charles Isherwood argued that Greenspan’s characters were so interesting that he’d wished that Passalus had never visited them so that we might have more time to discover their inner realities. But, I believe, that is just Greenspan’s point. Life is not an illusion, but a real thing to be grasped even in the vague shadows of our comprehension about where our experiences are taking us. Chekov’s poor characters are simply trapped in an illusion of the playwright’s creation, while Greenspan’s caricatures continue to intrigue us as we are forced to imagine where life may take them. Perhaps, in the end, we can imagine that even the permanently artificial Claire had to face the reality of her own life.