left in the lurch
by Douglas Messerli

Since Elia Kazan’s 1956 film Baby Doll was based on Tennessee Williams’ early short play, 27 Wagons Full of Cotton, and Williams, himself, later rewrote the play as Tiger Tail, it is difficult to know why Pierrre Laville and Emily Mann determined to “re-adapt” the version of the play, named after the movie, I saw the other day at Los Angeles’ Fountain Theatre. Perhaps one has to read all the variations, including Kazan’s original script—which he claimed he wrote without Williams’ help—before comprehending the need for yet another rewrite. Certainly, this production, with a few important exceptions, is pretty loyal to Kazan’s motion picture, and in that fact leads anyone who’s seen the wonderful movie to make comparisons. 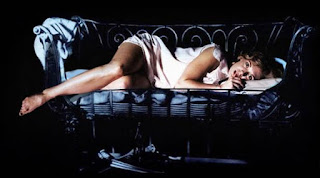 It is perhaps patently unfair to compare the acting abilities of the film foursome—Karl Malden, Carol Baker, Eli Wallach, and Mildred Dunncok—with the younger and far less experienced cast of John Prosky, Lindsay LaVanchy, Daniel Bess, and Karen Kondazian. Although Baker was the least talented of the film cast, she was perfect for the pouting child-bride of the Southern plantation bigot, Archie Lee Meighan. Wallach almost literally steamed-up the screen in his first film appearance back in 1956, and the always solid Malden played his character with near perfection, with Dunnock providing the daffy eccentricity of Aunt Rose Comfort.
The Fountain Theatre actors try valiantly to recreate these roles, and, at moments, they almost succeed, particularly Prosky—whose actor father I had seen several times on Washington, D. C. Arena stage—who almost captures the sweaty leftover of a once significant land-owner devoted to ginning the cotton of his neighbors. His final violent outrage against the new world in which his good-old-boy tactics are no longer rewarded, is particularly well-performed and almost terrifyingly touching, particularly when he suddenly realizes that his former “associates” are now intending to arrest and try him for his “irrational” behavior.
Bess (as Silva Vaccaro) does his handsome best to carry out the “tit-for-tat” values hinted at by Archie, as he attempts to seduce Archie’s teenage bride, who, by marriage agreement, is finally to have sex with her husband, after two years of chastity, in two days. But, despite his truly sexy torso and hips, as well as the script’s playful S and M complications wherein he gently and sometimes not-so-gently toys with her while holding a small whip, his acting simply doesn’t add up to the dark and far more horrifying games of hide-and-seek played by the film’s characters as they run through the decaying mansion’s empty rooms (Archie has just seen the furniture company repossess nearly every object in them for lack of payment). At moments Bess seems as sexually naïve and even disinterested as his inexperienced target; and we have to wonder, at times, whether or not he’s really more interested in her signature admitting Archie’s guilt in burning down his character’s competing gin-mill or in capturing her girlish body.
Of course, that’s a question the Kazan production itself asks. But here, Lavanchy’s Baby Doll seems far less ready and raunchy than Baker ever did. We know Baker, although playing hard to get, was perfectly ready to undergo the sexual act with her would-be rapist; but Lavanchy, seemingly a bit older than Baker’s version, seems far more confused and confusing, particularly since Lavanchy, alas, seems in the early scenes to be of the “holler” school of acting. I may be losing my hearing a bit, but the high loud pitch of her anger over Archie’s clumsy attempts at love-making came through as too much of a screech, making it far too obvious, that she no longer is the teenage “baby” she pretends to be. And after those early scenes it becomes difficult for Lavanchy to return to the innocent child in her scenes with Bess. 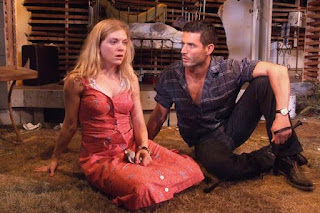 Kondazian certainly revealed Aunt Rose Comfort as an eccentric human being, but she seemed so crazed at moments that it was simply hard to believe her. Was her passion for chocolates, stolen from dying folks at the near-by state hospital, in the film? I certainly don’t recall it.
I do recall the remarkable collard-greens scene, in which the Sicilian immigrant Varcarro and Baby Doll praise the delights of the “pot licker” of Aunt Rose’s uncooked greens simply in order to taunt the angry Archie. As I remember it they both simply slopped up their faces with the awful stuff while turning the act of eating, as in the famous scene in Tom Jones, into a surrogate of sex. On this stage the entire scene appeared more as a pallid attempt to simply to get the older man’s goat.
Of course, we can’t get the close-ups of a camera, and we haven’t the space to see the couple run through the entire estate, locking themselves away in rooms just in order to dare the other to enter. These actors have only a front porch with a swing and fresh-water well, a small dining room and a tiny bedroom to play out their epic dance. And at moments at the well, on that swing, and in the tiny crib of a bed, this dramatic version really does reveal a kind of steamy and tender love.
We never know, in either the film or the stage production, whether or not Vaccaro will return the next day to collect his prize of the young girl and her aunt. Like so many of Williams’ heroines, they are left in the lurch. But after seeing this version I had far more doubts that he might even want to come back.

Posted by Douglas Messerli at 8:15 AM