tearing down bridges
by Douglas Messerli

Arthur Miller A View from the Bridge / Los Angeles, Ahmanson Theatre, the performance I saw was opening night, September 14, 2016
I have to admit that Arthur Miller’s A View from the Bridge, with its hyperventilated incestuous urges, its homosexual slurs, and even a hint of homoerotic desire, all circling round the well-meaning but not so bright longshoreman Eddie, has never been one of my favorite plays.
At least in the production I saw last night at Los Angeles’ Ahmanson Theatre, famed Dutch director Ivo Van Hove tossed out the family’s dowdy little apartment stuffed with fussy and falling-apart furniture. The original, in which five people are pushed into a single flat makes for a kind of claustrophobia which, a moments, if it generates some body heat, also takes all the air out the drama.

Van Hove, perceiving the play as a kind of Greek drama, has created instead a open rectangular space which serves as living room, bed room, lawyers’ offices and any other space that might be necessary. By creating two side panels of audience seats on the stage itself, the director has further created the sensation of a Greek amphitheater, while simultaneously diminishing the vast space of the stage and allowing for more theater seats. A single central opening, backed in black further creates a sense of dramatic entry as the characters come and go. As in the original, Van Hove uses the family lawyer as the chorus (the metaphorical “bridge” of the play’s title), commenting on and helping to explain the inner feelings of a man who cannot himself express them.
All of this opens up the play, allowing, as the director as argued, the playwright’s words to speak out their poetry. But, alas, Miller’s language has always been rather pedestrian, most of his figures being everyday blokes; and even though it’s given special privilege here, the character’s utterances feel as dowdy and diminished, at times, as the overstuffed furniture that one encounters in most productions of this play. 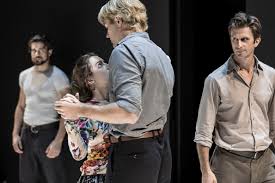 What exacerbates this feeling is that the play has been cast with very young talents. And while all are appealingly fresh thespians, few of them have heft of supposedly Sicilian middle-age figures of whom Miller writes. This is important, in the original, because, except for the two youngest of this household, all others feel worn out and used (just like their now missing furniture), with few choices left. Marco (Alex Esola) may intend, after a few years of working in the US, to return back to Italy and his wife, but we know he will have lost their best years together and will never recover that hole in his life.


Eddie (Frederick Weller) is so attracted to his growing-up niece because, like a daughter, she has lit up his otherwise drab working-man’s life. His feelings for her, moreover, have a great deal to do with middle-age angst. Like many a hard worker who suddenly discover themselves in their late 40s, he is terrified of what’s ahead. If the new interloper, Rudolpho (Dave Register) does succeed in carrying her off, Eddie will have little joy left.
Like so many wives of men like Eddie, Beatrice (Andrus Nichols), although loving, feels as if she have been cast off, and in emotional response, finding it harder and harder to demonstrate that love.
This younger cast simply does not have the heft and weight to give these feelings their due. Indeed, the handsome and lean Weller, throughout much of the play, seemed simply too slight and frail to convey the range of emotions raging through his character; at moments we simply couldn’t hear him. At first I feared that my somewhat elderly ears were playing tricks; but as rose to leave at the end of the play, the gentlemen on my left spoke to each other of having the same problem in simply hearing him. It was not that Weller was not a good actor, he simply didn’t yet possess the “gravitas” of the character.
As Catherine, moreover, Catherine Combs seemed more like a mini-skirted pre-teen than an eighteen-year-old high school graduate set on becoming a stenographer and secretary. I am sure Van Hove made this a conscious decision in order to establish the girlish attitude that innocently crossed sexual lines in her relationship with her uncle. But when the handsome and charming Rodolpho comes into her life, it is a bit difficult to even comprehend his attraction to a being who seems to be still a child. The tall and somewhat lanky Register, moreover, seemed at odds with the diminutive Combs. 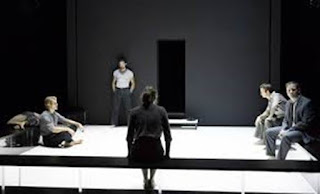 But, finally, it is simply the oppressive obviousness of Miller’s script that dooms his dark drama. We know, almost from the beginning, where this drama is going to take us: in tragedy for male lead, Eddie, and disaster for the two illegal immigrants. The same scenario is being played out in our daily newspapers even today.
The only surprise in Miller’s rendering of this tale is Eddie’s confusion over his own sexuality. It is almost as if, since he cannot sexually “have” Catherine, he will convert the handsome Rodolfo into someone whom he might love. In his confused macho thinking the very fact that the young Italian man sings, is easy-going, can quick-design a dress, and dance means that he must be “odd,” code word for gay. In his mind, he may justify his long kiss on the lips with Rodolfo as “outing” the man before Catherine in order to save her; but we know that there’s definitely something else going on there. And it is the only time when Eddie transforms his ever-present anger into some sort of passion; and, accordingly, Miller’s sudden revelation still startles even today.
Of course, after such an unthinkable act, he must destroy everyone around him, particularly himself, using his own kind of macho—very much present in the Italian Marco—as a tool of his death. The only hope Miller leaves his audience is that Rodolfo and Catherine may be spared and will go on to create a more fluid familial life. But since Rodolfo, as Marco’s brother, may be implicated in the murder, we cannot even be sure of that.