Shelagh Delaney A Taste of Honey / Los Angeles, Odyssey Theatre Ensemble, the performance I saw, with Deborah Meadows, was on Sunday, October 2, 2016

It’s interesting that this season has seen two new revivals of Shelagh Delaney’s 1959 play, one at New York’s Pearl Theatre, and the other at Los Angeles’ Odyssey Theatre Ensemble. I’ve not seen the New York production, but apparently, like the Los Angeles revival it includes an on-stage jazz ensemble, surely appropriate—as opposed to some of the other music used in Odyssey version (“Que Sera Sera,” sung by both the character Jo [Kestral Leah] and on record by Doris Day, one of my very least favorite songs of the 1950s).  Although I haven’t read the script for years, I certainly don’t recall, moreover, Jo’s mother, Helen (Sarah Underwood Saviano) taking up a saxophone to accompany the trio. 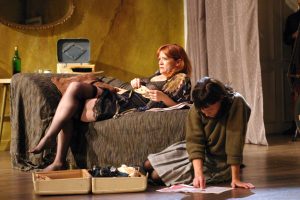 In any event, I am sure that, along with several statements, particularly by Helen, spoken directly at the audience, director Kim Rubinstein intended to “modernize” a play that does certainly creak some. I’m just not that sure all those updatings truly worked. Perhaps this late 1950s slice of kitchen sink drama—without, fortunately, the sink—is best presented as a kind of historical document. Perhaps, even in its original appearance—one of a handful of plays and films by the likes of John Osborne, Arnold Wesker, Alan Sillitoe, and John Arden who, in their “angry young men” grouping, completely changed British theater—it would quickly seem dated, with far more experimental plays by Harold Pinter, Tom Stoppard, and the American Edward Albee being performed nearly simultaneously and in the years following. 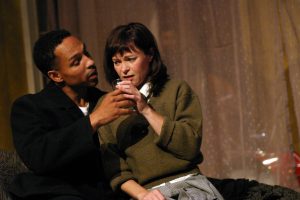 What is still amazing about this play is not its language—although Delaney always expressed her delight in the Salford dialect—but in its daring mix of subjects. Writing the play in response to the repressed gay sexuality of the plays of the elder statesman of the day, Terence Rattigan, Delaney, without a blink, calls up, quite straightforwardly, issues of prostitution, child abuse, and the vastly different ages of the marrying couple (in the behavior and relationships of Helen and her 20-year younger boyfriend, Peter [Eric Hunicutt]); teenage sex (both Jo and the author herself were under 18 when they became pregnant); interracial marriage (the young sailor with who whom Jo finds her “taste of honey,” Jimmie [Gerard Joseph] is black); and homosexuality (this, in the person of Geoffrey [Leland Montgomery] who cares for Jo when her sailor disappears).
If some of these themes seem introduced with almost accidental casualness, others are taken up quite seriously, presenting alternatives to the current—and sometimes still present—sentiments of the day. Yes, Geoffrey, as the gay nurse, is often a kind of stereotype, but he is very much more real and, at least, a different kind of stereotype from Rattigan’s whispering and tortured men and women. 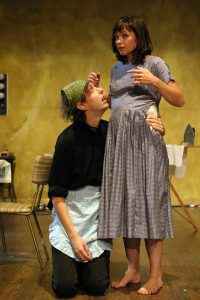 What also doesn’t get much said about the play today—and I’m afraid the Odyssey production didn’t completely succeed in its attempts to portray it—is that A Touch of Honey is also very funny, sometimes in the manner of Pinter and Albee. Although Jo seems permanently damaged by her mother, their relationship is often a dependent one, based on their mad “Irish” sense of argument.
Saviano, perhaps the strongest member of this cast, did her best to make her lusty “good-time-girl” mother into less of a monster and more of a blustering fool. But it’s a complex role and needs a superlative thespian like Angela Lansbury, who played Helen on both the stage and in film, to get it right. Certainly, she has the lusty, loud-voiced monster down, but the kind of cow-like tenderness Albee discovers in his Martha, is here missing.
All the actors did their credible best, with Leah having the benefit of a Manchester accent, while the others shifted in and out of Salford dialect. Joseph, moving from the jazz ensemble drums to sailor was a likeable and quite tender “black prince” for Jo, and helped us to comprehend what Jo sees in him.
Montgomery’s character is one of the most complex of the play. As a gay man, seemingly still closeted , since he will not reveal why he has been thrown out of his previous digs—clearly because he has been caught in bed by his landlady with another man. He also has to channel, without being too effeminate, the campy humor of the day; no mean task.
He is also quite evidently “in love”—whatever that might mean in a work where no one feels loved enough—with Jo, offering to marry her in a far more serious way that even Jimmie has. He’d surely be the most loving and caring father for her mixed-raced baby. 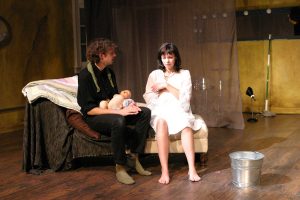 But he’s also a kind of coward, easily scared off by the returning Helen and, before that, by her drunken lover, Peter. And, ultimately, he leaves Jo, as she begins to go into birth contractions, in the lurch. Without him, more importantly, she has no one to help her escape the same patterns which have destroyed Helen, and one might imagine the two in the future locked in their hateful embrace a bit like the mother and daughter duo of Edith and Edie Bouvier Beale of Grey Gardens fame.
Ultimately, however, everyone in this play is a permanent outsider, with no way to truly enter a society that would never be able to understand them even if they had been offered “entry.” Although Delaney hated to be described as one of “the angry young men,” she was certainly a very angry, and yes humorous, young woman. Although she wrote one other play, several film scripts, and a credible autobiographic work, Delaney had put all of her wrath into this one early play. For that reason, if for no other, A Taste of Honey is a work worth watching again, even if it does now function better as a document than a living modern theatrical masterwork.