Joseph Fields and Jerome Chodorov (book, based upon their play My Sister Eilleen, based on the stories by Ruth McKenney), Betty Comden and Adolph Green (lyrics), Leonard Bernstein (music) / produced by LAOpera, conducted by Grant Gershon / the performance Howard and I saw was December 4, 2016, a matinee performance

In preparation for the centennial of Leonard Bernstein’s birth, California and Los Angeles is, as Los Angeles Times music critic, Mark Swed noted, way ahead of the curve. Last summer Michael Tilson Thomas conducted the San Francisco Symphony in a semi-staged version of On the Town, and more recently, Gustavo Dudamel performed a version of Bernstein’s West Side Story at the Hollywood Bowl. I saw neither of these highly praised productions. But yesterday my husband Howard and I did attend a glorious semi-staged production, conducted by the Los Angeles Chorale director, Grant Gershon, of Wonderful Town. 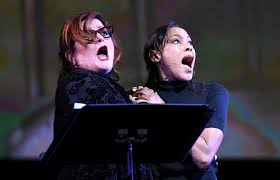 I saw a full Broadway revival of this sweet-toothed musical in 2004, and wrote about it, along with other Bernstein works, in My Year 2004, so I won’t retell the full story of the two Ohio sisters’—based on Ruth and Eileen McKenney (the latter of whom, strangely enough, eventually married American satirist Nathanael West)—attempts to conquer New York. Let’s just say that their antics end in Eileen winning the heart of nearly every heterosexual male she meets in Greenwich Village, and the less attractive Ruth, winning the hearts of an entire fleet of the Brazilian navy and the love of one man, magazine editor, Robert Baker (Marc Kudisch). If the rest of the musical is pretty simplistic, so be it. With Bernstein music and witty lyrics by Adolph Comden and Betty Green, who cares that the work remains rather a lightweight piece?
There’s always a problem, or at least a fear, when I hear that an opera company is going to produce a work of light-opera and dialogue such as this musical. Although opera performers are becoming, over the years, increasingly versatile, I still recall wonderful singers such as Leontyne Price stiffly singing “Tis a gift to be simple” and other such painful incursions of great opera singers such as Luciano Pavorotti trying to make his way through a song from Cats. Fortunately, under Gershon’s talented hand, the LAOpera turned, this time, to mostly Broadway veterans, such as the comically brilliant singer/actor Faith Prince as Ruth Sherwood,  the young Nikki M. James for her sister Eileen (who, apparently, is an even better dancer than she is a charming singer), Roger Bart, playing numerous roles, a wonderful character actor, and the strong-voiced baritone, Kudisch, who did nicely by his role.
These singers stood at music stands on the stage of the Dorothy Chandler Pavilion, backed by a large contingent of what I presume are the LAOpera orchestra members. If in a few moments, the tempo seemed a little sluggish, overall its was brightly played, with even director Gershon getting in on the jolly Irish jig of “My Darlin’ Eileen,” which demonstrates the attraction of Eileen to the entire police force of the local Greenwich Village station after the two sisters get into trouble by dancing the resplendent “Conga” through the local streets.
How could you not love a musical whose very second song—after a tourist like trip through the village, helped along in this production with 1950s-like cinematic projections by Hana S. Kim—is the wailing “Ohio.” If Prince doesn’t quite have the heft of a Rosalind Russell, who makes the song sound a bit like a combination the mooing cows and mewling cats of the character’s home state Prince does a perfectly credible job. And she finds her comic stride in the hilarious “One Hundred Easy Ways (to Lose a Man),” a song almost as perfect for her many theatrical talents revealed in Guys and Dolls’ “Adelaide’s Lament,” a Broadway moment that I will never forget.

Eileen gets her chance to sing out in “A Little Bit of Love,” in which she reveals her admiration for the gentle soda jerk Frank Lippencott, while soon after switching her mind to the next man she meets. She gets her chance to reveal her dancing talents in “Conga,” not only, along with nearly everyone in this cast, leading off a trail of conga lovers, but ending it in a series of lifted cartwheels without hardly losing her breath, let alone getting as dizzy as those movements made me, sitting in the audience.
And, yes, I have heard more spirited versions of the musical’s final “Wrong Note Rag,” in which Bernstein almost painfully blasts our ears with continued off-key combinations of music—both Russell’s recorded versions and the Broadway revival of 2004 did this better—but Prince, James, and the marvelous LAOpera chorus members still got through it quite nicely. Even the “Wreck” (Ben Crawford) gave us a nice rendition of “Pass the Football.”
The final Conga performed by the entire cast as they exited out the audience doorways, absolutely delighted this large audience, which gave everyone a standing performance. If not the greatest gift to Broadway theater (after all, both On the Town and West Side Story are far greater musicals), it pleases, and in a production such as this one, with only 3 performances, who can find a better way to spend a Sunday afternoon?