dance of surprises
by Douglas Messerli

Matthew Bourne (choreographer) Early Adventures / performed at Beverly Hill’s Wallis Annenberg Center for the Performing Arts, May 17-21, 2017 / I attended with Thérèse Bachand the matinee on May 20, 2017.


Although Matthew Bourne has choreographed plenty of traditional musicals and balletic events, including My Fair Lady, South Pacific, Oliver! and The Red Shoes, he is perhaps best known for his notoriously gay-themed productions, particularly his Swan Lake and his proposed male-male production of Romeo and Juliet. 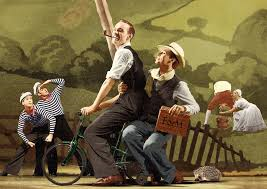 The three ballets of Early Adventures, reconceived works from the late 1980 and early 1990s, often toy with some of the same gestures, surprising and sexualizing sequences which might otherwise have been “cute” or simply “sweet.” Yes, there are dazzling heterosexual couples spinning through the three pieces, but the marvel of his works is that at any moment the proper British characters might slip into bawdy and outright randy behavior, like the bad boys and girls of the first work here performed, “Watch with Mother” from 1991, based on Joyce Grenfell’s “Nursery School Sketches” (probably forgotten by most Americans, Grenfell, who died in 1979, is still a well-loved monologist and performer in Britain).


The children of this piece begin simply enough by playing a kind of version of ring-round-the rosy, but the boy at the center of their ring, Paris Fitzpatrick, is clearly an outsider to this community of little brutes, and quickly finds himself the subject of torture to the children who leap upon each other’s backs, riding their peers like horses, rolling like tops toward one another, and generally displaying other elements of quite sadistic behavior, accompanied by music by British composer Percy Grainger, Bach and Fauré.


In another scene, Bourne duplicates the famed railway restaurant scene from David Lean’s Brief Encounter, playfully satirizing the long and languid stares of the couple(s) that can never result in more than a good-bye kiss.


The music of the period by Elgar, Coward, Coates, and, again, Grainger moves us to the country for a good old-fashioned clog dance, and another romp through country lanes by male-male, female-female, and mixed couples ends in the death of one of the several stuffed animals peeking out from the greenery. All dancers suddenly go wild on children’s scooters, and a kind of funeral performance of Pomp and Circumstance is performed on ukulele. One might summarize the piece by suggesting that Bourne’s Brits, despite their polished behaviors in town, go absolutely wild in the country!


The raunchiest pieces of Bourne’s repertoire, however, are saved for the last French-based series of dances, The Infernal Galop: A French Dance with English Subtitles. Here the rather up-tight British can go whole hog in their imaginations of French lowlife behavior.


To the strains of Edith Piaf, Charles Trenet, Tino Rossi, and Mistinguett, streetwalkers prowl the Paris wharves, a merman is serenaded by three sailors, and after an adventurous quartet of toughs converge at a street pissoir, two of the group proceed to engage in rough sex that keeps getting interrupted a band of street carolers. The piece ends, how else?, in a kind of satirical version of Offenbach’s can-can. In short, Paris is presented as rough and tough, alluring and gay as any Baedeker guide might wish to imagine it.


Bourne is a great narrativist, who can convey character, class, and sex in just a few bends and rolls of the body, and his dancers in this production represent a wide range of personal eccentricities. No one in Bourne’s dances, he suggests, is precisely what they seem, as men and women wind through each other’s arms and legs as if they were performing a kind of Schnitzler-like ballet of “hands around.” The very energy of it is a lovely thing to watch.