the reluctant warrior
by Douglas Messerli

Lorraine Hansberry Les Blancs / Rogue Machine Theatre, performed at The Met Theatre, Los Angeles / the performance Howard Fox and I saw was on Sunday, June 4, 2017
Les Blancs (The Whites) was Lorraine Hansberry’s last play, and she left it uncompleted at the time of her early death of cancer at the age of 34. The play was finished by her husband Robert Nemiroff and produced for a short 1-month run on Broadway in 1970, five years after her 1965 death.

Like many contemporary critics, I knew the history of this play, but having never actually seen a production or even having read it, I presumed it was simply the failure that critics of the original had deemed it. And, yes, the play is rough and even incomplete in some parts, and is polemical throughout—Hansberry was, after all, a playwright of ideas—but how fortunate that Los Angeles’ Rogue Machine Theatre determined to revive it (a production of the play also occurred at London’s The National Theatre last year), for even with its obvious imperfections, I’d argue this is a far more ambitious and energetic piece than her classic realist drama A Raisin in the Sun, which I saw again a few years ago (in 2012) at Culver City’s Kirk Douglas Theatre.
The well-crafted Raisin perhaps deserves its classic status, but the very rawness and incompleteness of Les Blancs pushes the boundary of theater of its day, and shows its remarkable author as moving away from her realist roots. Referencing the famed Jean Genet play, The Blacks: A Clown Show which premiered in 1959, the years in which Hansberry was writing her work, the author pursues a more expressionist course rather than Genet’s surreal and absurdist perspectives. 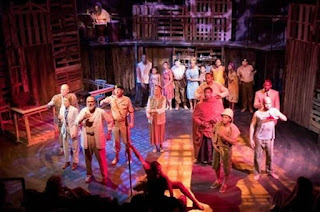 Like The Blacks and the lesser known Aime Cesaire play of 1966, A Season in the Congo, Hansberry’s work is located in Africa, in her case an unnamed African country with similarities to the struggles of black natives in Ghana and Kenya, with its strongest reverberations coming from the 1960 revolution in Congo, where, just as in Hansberry’s play, several white missionaries were slaughtered.

It is hard for me to even imagine an American playwright of the Kennedy era (he became president, one recalls, in 1961), particularly one suffering from the last stages of cancer, reaching out to African cultural traditions and the battles between blacks who sought to assimilate with white settlers and those determined to free themselves with violence—positions represented by the two extremes in the American black community by Martin Luther King and Malcolm X—in order to create a dialogue between the two visions.
Certainly as early as A Raisin in the Sun, Beneatha, the Younger daughter, reaches out to embrace all things African. But the intellectual maturity of Hansberry’s debates in this play—and indeed we might define this work as in the Socratic tradition, a series of debates between
figures representing its various viewpoints—sprinkled throughout with humor and pathos, lifts this work to a near spiritual level.
The central struggle of the play is between the white imperialists—who have treated the African native populations as backward children who, they claim, will never come to the wisdom without their help—and the black tribesmen—who unsuccessfully seek justice and fairness in the white legal systems, and, ultimately, demand total freedom. Yet the major verbal battles of this work are between the blacks themselves, particularly between Tshembe Matoseh (Deasean Kevin Terry)—a partially assimilated black man educated in the West, married to a white wife, with a new baby, who has returned only briefly for his tribal-leader father’s funeral—and his totally assimilated brother, Abioseh (Matt Orduña) who has become a priest. Between them is their uneducated younger brother, Eric (Aric Floyd), who divides his time between the white-run mission and his tribal hut where he excessively drinks. 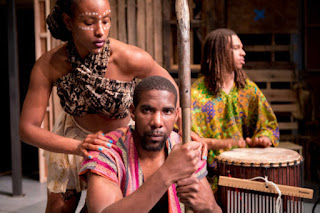 Neither of the white-educated brothers wants violence, and both hope that the current African ambassador to England, Amos Kumalo, will return to cut new agreements between the tribes and the settlers. Yet, Tshembe is simply too intelligent to see this as a solution, and, although he denies it, he hates the walls whites have created in relationship to his own race, which his profound discussion with a white hanger-on journalist, Charlie Morris (Jason McBeth)—come out to Africa to write a piece about the famed mission, reveals. At issue is difference between race and racisim, between reality and effect:

Tsembe: I said racism is a device that, of itself
explains nothing. It is simply a means.
An intention to justify the rule of some
men over others.
Charlie: But I agree with you entirely! Race hasn’t
a thing to do with it actually.
Tsembe: (with pleased perversity) Ah—but it has!
Charlie: Oh, come on, Matoseh. Stop playing games!
Tsembe: I am not playing games! I am simply saying
that a device is a device, but that it also has
consequences: once invented it takes on a
life, a reality of its own. So, in one century,
men invoke the device of religion to cloak
their conquests. In another, race. Now in
both cases you and I may recognize the
fraudulence of the device, but the fact
remains that a man who has the sword run
through him because he refuses to become
a Muslim or a Christian—or who was shot
in Zatembe or Mississippi because he is
black—is suffering the utter reality of the
device. And it is pointless to pretend it
doesn’t exist—merely because it is a lie.


The fact that these very same words might be spoken about a great many of the situations today, makes clear just how brilliantly perceptive Hansberry was, and how she was attempting to create a new kind of art that might speak to the truth: an art of music, expression, and dance that nonetheless spoke intensely to thought. Tears almost well up in my eyes when I realize how, if she had lived longer, important her art might have been to the later 1960s, when the same kind of explosions represented in this work came to happen as well in the US, with the murders of so many of our leaders and inner-city riots.
Throughout Les blancs, the well-meaning Charlie stomps across the floorboards of the crumbling mission, just hoping to talk. But no one, black or white, really wants to “talk,” the words having already all been spoken and having failed. If Charlie wants to “build a bridge” between the cultures, the people in this backwards spot recognize the bridge has never been completed by white culture, only promised, and that “open communication” between the races has become almost meaningless. Charlie’s rightful cries of intellectual prejudice fall on deaf ears. 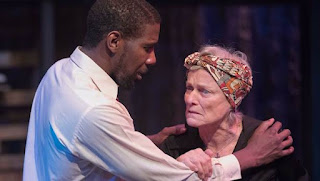 Even the renowned mission Charlie intends to write about, as the mission doctor Willy DeKoven (Joel Swetow) reveals, late in the play, is all a lie. Its founder, Dr. Nielsen (a man who has gone cross the river, but, like Godot, never shows up for his appointments, having been already murdered by the natives), although devoted to saving lives and converting souls, has, as DeKoven clarifies, devoted the life’s-work to genocide and the status quo. Even as he saves lives, he continually patronizes and even laughs away the demands from the local chief for equality. Despite his insistence that the clapboard shack appearance of his hospital is an attempt to make the natives feel at home, a completely up-to-date white-walled and antiseptic clinic only a few miles away serves the natives far better. The mission itself, accordingly, becomes a kind of device to keep the local natives in bondage. Is it any wonder that most of the tribal leaders have stopped visiting?

Far worse, what the always-drinking (indeed more alcohol is consumed on this stage than any play in memory since Williams’ The Night of the Iguana) and highly sarcastic DeKoven reveals, is the hypocrisy of Nielsen’s faith. When the good Nielsen discovers that the wife of the local chief, father of the play’s major protagonists, has been raped by the local white army officer, Major George Rice (Bill Brochtrup), he allows her to die in childbirth; the child is saved, despite his desires, by his own wife serving a midwife (beautifully performed by Los Angeles’ noted actor Anne Gee Byrd): the boy is Eric, Tshembe and Abioseh’s unwitting brother.
And DeKoven, it is hinted, is not only plying Eric with regular bottles of alcohol, but encouraging the boy’s experiments in female sexuality, perhaps even abusing the naive boy.
No one, in this fallen world, in short, is innocent; and even the young idealist, Tshembe, inevitably, because of his natural-born ability as a leader, is drawn into the conflict. In a touching discussion with Mrs. Nielsen, as she sits beside the casket of her husband, he realizes mid-sentence, with her own urging, that he cannot return home, but must become the “warrior” who will help free his people of white domination.
The play ends in the tragic murder by Tshembe of his own brother Abioseh, with Mrs. Neilsen—having long ago accepted her fate—being gunned down in the cross-fire. Tshembe too has now given up his ideals, abadoning his desires, like “Orestes…Hamlet…the rest of them,” to simply walk away to “so many things we’d rather be doing.” This is a world of the doomed, a slightly Frankenstein-like world in which the monster must be continually created and recreated.
The acting of Desean Kevin Terry and Anne Gee Byrd in this production is particularly moving, but everyone involved, including the play’s percussionist (Jelani Blunt) and the beautiful mythic dancer (Shari Gardner) are remarkable.
For those truly interested in living theater instead of embalmed dramatic classics, I suggest you hurry over to The Rouge Machine production (at  The Met Theatre) to see this play before it closes on July 3, 2017.

Posted by Douglas Messerli at 9:30 AM