The last time I encountered George Orwell’s legendary Animal Farm, I believe was in high school, when we were encouraged to read the book as a fable against Communist myths, a very popular work in the Red-scared 1950s. I don’t recall my personal reactions to Orwell’s attempt to correct the Soviet myths of the day—at the same time, I was also secretly reading Albee, Pinter, and Genet— but I certainly would not have imagined that the writer penned the piece, in part, to warn against totalitarianism while hoping to jump-start the socialist concerns that had then been largely abandoned by the West. 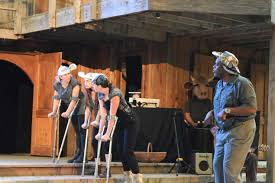 Strangely, seeing it again the other day at the famed Topanga Canyon-idyll, Will Geer’s Theatricum Botanicum, I still found it hard to see it as an encouraging statement to England’s dormant socialists, and a warning for all societies to remain vigilant about even political movements that seem to bring beneficial change. In retrospect, I might even suggest that Orwell’s political ideas, in a strange way, bear a slight resemblance to Mao’s constantly counter-revolutionary positions—but, obviously, without the continual dominance of one or two individuals.
Peter Hall’s stage adaption of Orwell’s short fiction, with music by Richard Leaslee and lyrics by Adrian Mitchell, captures the essence of the work, while providing a great opportunity to please audiences through the various guises of human kind playing pigs, horses, chickens, lambs, cows, a donkey, cats, dogs, and, occasionally even human beings.


The Botanicum production, directed by Ellen Geer, has cleverly dressed its human animals in small and large ways, representing ears often with one wire-jigged abstraction and the other in a more representational manner. Pigs noses are characterized by large corks, the bleating sheep hobble about on two legs and two crutches (representing them as slightly unstable beings who stumble through their days), the female chickens sport full boas as they cluck out their egg- laying days, and the two horses feature a full horse mane, while the rest of their body remains very human—particularly in the case of the lean, shirtless actor, Max Lawrence as the hardworking Boxer. The dogs—played by young men forced to move on all fours, dressed in ferocious dog costumes (a difficult task given yesterday’s 97° temperatures)—were absolutely terrifying. I sat in the very front row, and pulled in my legs every time they passed by.


Today, nearly everyone knows the story of how the animals at Manor Farm, after being continually abused by the farm’s alcoholic owner, rise up in protest, running him off the property and establishing their own “ideal” society. Although all the animals attempt to educate themselves, some, like Boxer, can’t get past their ABC's. Others, particularly the pigs—the dreamer-leader, Snowball (Christopher Yarrow), the more insistent Napoleon (Mark Lewis), and the outspoken propagandist of their cause, Squealer (Melora Marshall)--at first lead intelligently, demanding free rights for all animals and proscribing laws that separate them from humans and their corrupt actions, but gradually, over the course of the two acts, begin to starve the others, propagandize their sudden shifts of policy, and ultimately rule their Animal Farm in a way that is even worse than their former human owner.


If, at first, it is amazing that these uneducated animals can work together to even create a sophisticated mill, slowly after their hard work, they find their crops are being sold off to their human neighbors and their eggs being stolen for the gain of the pigs, who claim that their animal rights clause now has an important stipulation, “some animals are more equal than others.”


Orwell’s political rhetoric is made more powerful—and, perhaps, palatable to the mixed young and older audience—through the Kurt Weill-like songs by Mitchell and Peaslee. If none of these are precisely memorable, they are sung with such good-natured talent by the ensemble, accompanied by a band consisting of several members, with Daniel Sugimoto as the pianist, that ameliorate the sad abuses of power that destroy the hard-working and always agreeable Boxer, the idealistic pig Snowball, and several generations of the hens whose eggs go missing.


The beautiful idea of “Animal Farm” gradually is transformed by the ruling pig class back to a Manor, in which the animals have no rights whatsoever, and are seen as nothing but creatures worthy of abuse. In “Why I Write” Orwell recalls seeing a young farm boy driving a carriage as he whipped the horse for varying in any direction. And by the end of his parable, the pigs have been transformed back into humans who have no tolerance anymore for their fellow animal beings.


Orwell’s works and other such political fables have become popular again in a period when, under the presidency of Donald Trump, any sane person can once again fear not only the delimitations of viewpoints of McCarthy’s 1950s, but that events might even result in a slightly different kind of version of totalitarian rule, when propaganda overrules our country’s laws, and truth is conceived of something so transactional that it no longer has any meaning.


If this long-lived dream of repertory theater—Geer and his wife founded the theater on his own property in the early 1950s as a refuge for fellow blacklisted artists of the McCarthy Era—at moments seems a bit amateurish, in the end I felt this was a far-more profound theatrical experience than I had had two days earlier at the Pantages’ production of the hit The Book of Mormon. This rustic theater is so beautifully located, that one truly does feel one has entered an amphitheater out of time and place. This play, along with the company’s Shakespeare productions (this season, The Merchant of Venice and A Midsummer Night’s Dream) along with other contemporary productions, runs through October 1, 2017, and I suggest that any interested reader make the trip, as I did with former Topanga Canyon resident, Pablo Capra, to rediscover what real theater is all about.