jacques brel is dead and worth resurrecting

Eric Blau and Mort Shcuman (conception, lyrics, and additional material, based on the lyrics and commentary of Jacques Brel) Jacques Brel Is Alive and Well and Living in Paris / 1968, revised in 2017 by the Odyssey Theatre Ensemble, Los Angeles / the production Howard Fox and I saw was on Sunday, July 9th, 2017.
Yesterday afternoon, my companion Howard Fox and I attended an absolutely lovely reprise of the 1968 off-Broadway hit, Jacques Brel Is Alive and Well and Is Living in Paris, when it ran for four years, and eventually was reconstructed into a movie version in 1975. 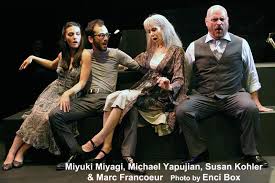 Howard and I missed out on those performances, and knew very little of Brel—although Howard vaguely recalls seeing the movie. I had not, and truly didn’t know Brel’s songs except to comprehend that this Belgian composer had been assimilated into the French chanson tradition, and had influenced several international figures (Edith Piaf herself has performed some of his songs, most notably, “Ne mais quitte pas,” a song not in this anthology) and even American singers (The Kingston Trio did a remarkable, and I would argue, completely atypical rendition of his “La Moribond” as “Seasons in the Sun.”). But, basically, I’d never really known his significant contributions. But given this production, that has all changed.


Indeed, both Howard and I, after hearing this perfectly delightful rendition of some of his major hits, went happily home slightly scracthing our heads. What was all the excitement about Brel about? Certainly the audience were of the age that they most certainly might have known of his 1950s and 1960s works, if not of his later cinematic career. Even though we can identify as elderly, we were most definitely on the younger end of the ages of these attendees. I believe we represent a kind intergenerational group, lost in the cusp between the 1950s nostaglic narratives and the transformation into the rock world of Elvis Presely, and, soon after The Beatles and the Rolling Stones. Many of those of of us born immediately after World War II feel slightly trapped between Rosemarly Clooney and Janis Joplin, particularly those of us who sought intellectual alternatives to pop culture. I think both Howard and I feel we somehow lost out, because of our serious bent of minds, of the popular culture of our own times. And what I’ve seen in trailers of the Jacques Brel movie, filled with late 1960s, hippyish notions of clowns, balloons, and dancing, half-naked, revenents of the sun, I can’t imagine that I would have truly enjoyed the Brel musical as expressed by Eric Blau and Mort Shuman. My guess is that the 1968 play was also filled with just such topical tropes.


Fortunately, the current Los Angeles Odyessy Theater production dispels such attic ideas, and the four strong singers, Marc Francoeur, Susan Kohler, Miyuki Miyagi, and Michael Yapujian, work hard to just simply interpret the English lyrics as created by the Blau/Shuman team. But here, it appears, they are also are faced with a problem: the American translators’ shift from the French “chanson” tradition into a kind of American narrative form that is far heavier and denser than the originals. Dan Fisbach’s rather stodgy direction only encourages a kind of plodding story-like presentation of Brel’s far more memorably very personally empassioned songs.


I say all of this after having left the theater, despite memories of such lovely performances as Susan Kohler’s “My Death” and, even better, her “Marieke” (sung in three languages) and the wonderful last chorus of the 1956 work, “If We Only Have Love,” still with a sense of disappointment. Frankly, many of the songs selected to be included in the Blau/Shuman production are, admitedly, just a bit corny— particularly the opening number “Marthaon,” the war-inspired “Statue” (in which a bronzed war-time sculpture comes alive to admit to his sexist behavior to women), “The Bulls” (although admirably performed by the engaging Michael Yapujian), “Funeral Tango” (sung by Marc Francoeur), and, above all, the late musical number “Carousel” (in which the whole cast lamentably engages in a calliope rendition of the popular attraction).


These songs all appear to be from a generation that has little significance even to the 70-year-olds Howard and I now represent. God knows how younger people (a few of whom had snuck out for a peek) might feel about these musical elephants? I forgave them because of their datedness and loved the cast for their obvious singing talents. We all applauded enthusiastically, and, not to forget, the four musicians—keyboard artist Anthony Lucca, bass palyer Cyrus Elia, percussionists Conor Molloy and Ryan McDiamid, and guitar player Max Waner—who would have made any production proud of their existence. Some of their jazz intonations while they played, apparently improvised as we all waited for some of the performers caught in heavy Sunday afternoon traffic. We enjoyed it, in short, even if, as we moved home down Olympic Bouelvard, I wondered why I still felt so empty, as if I’d swallowed a marshmallow concoction that left me with an unresolved hunger.


The next morning (today), as I listened to many of the original songs sung by Brel and others on UTube and other sources I began to see what my problem was. Even the least interesting songs suddenly seemed to reveal to me that what didn’t appeal in the musical, were truly memorable, such as “Amsterdam” (performed at the Odyssey by Marc Francoeur) while Brel which gave it, in his concert-sweaty performance, a sort of red-light urgency; David Bowie’s English version was equally shocking, making you wish to help pull up the sailors’ zippers and send them, after they were safley sated on fish dinners (fish representing women in the French), on their way. “Amsterdam” or, better translated, “In the Port of Amsterdam,” is a red-light number about all the boys (of whatever sexual persuasion) who have sought out sex before drunkenly being shipped back to their endlessly lonely internments upon the sea.

The slight love song, “Fanette” of Jacques Brel’s Act II becomes, in Brel’s singing, a truly painful adolescent memory that can never leave the singer whole again. What Susan Kohler compentently sang as “My Death” in Brel’s La Mort becomes almost a death march into non-existence, and, sung by Bowie, becomes a terrorizing march into the self-destruction which, alas, he finally faced. Even the eerie “Old Folks,” sung at the Odyssey to an audience bascially represented in the mocking English lyrics of folks who seldom wandered out and listened to the tick-tock of the silver clock, seemed, given Brel’s interpretation, a passionate expression of Thomas’ “I Will Not Go Gentle into that Good Night.”


It’s now clear, given the passage of time, that Blau and Shuman’s Englishized narrative statements have truly little to do with the originals, and that Brel’s work might have been far better served in the US by an anthology of the hundreds of wonderful adaptations by wonderful American interpretors from Ray Charles, July Collins, John Denver, Nina Simone, Frank Sinatra, Scott Walter, and Andy Williams than in a discrete review of four talented but basically amateur singers.


I think everyone who loves great music should run to the Odyssey Theatre and hear the versions of the great singer-performer Brel which these well-intentioned performers interpret. It’s a a great introduction to the Belgium genius. But then, go home, search out UTube and other such services and listen, again and again—all day if you have the time. And learn what Brel’s incredible music is truly about. I should add, I immediately posted some of these works to my USTheater, Opera, and Performance site. Go and listen and listen again.