pure ecstasy
by Douglas Messerli
Ezralow Dance Primo Passo / the performance I attended with Lita Barrie was at the Bram Goldsmith Theater at The Wallis Annenberg Center for the Performing Arts in Beverly Hills on July 13, 2017.


The influences of the Ezralow Dance Company’s new pieces gathered as Primo Passo are numerous, including the choreography of Paul Taylor, Philobus, and Broadway musical theater productions, the art of Robert Longo, and the music of David Lang. But in its attention to the possible different meanings of “first step,” the seven pieces of this collection of works, old and new, are entirely original in their brilliant displays of athleticism. 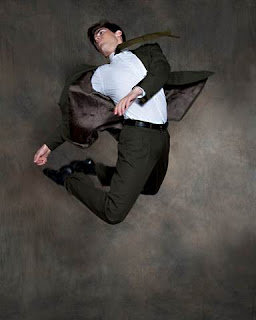 In “Brothers,” two men, Gerald Espinosa and Re’Sean Pates, embrace and spar with one another, drawing the other to the self before sending him away again. In their couplings, moreover, the “brothers” seem to not only to be developing and creating their familial relationship, but exploring a kind of sexual relationship as well, as if they were possibly new lovers determining whether or not they can maintain something that might survive.


In “Foreign Tales,” huge lantern-like objects are transformed into two women dancers, Kelsey Landers and Anthea Young, who gymnastically turn inside out of their hoop skirts, resulting in amazing parallel pas de deux with the males that take the viewer into seemingly fantastical worlds wherein the human body literally becomes a series of shifting shapes that make it difficult, at times, to know up from down,


Robert Longo’s marvelous works of art represented in his “Men in the Cities” series becomes the subject of “Super Straight is coming down,” danced by the full company, including Will Clayton, Gerald Espinosa, Charissa Kroegeer, Kelsey Landers, Vanessa Nichole, Raymond Ejiofor, and Sasha Rivero. Like Longo’s paintings, these besuited figures, seemingly from the 1960s, seem to have been caught in an instant snapshot (Longo was influenced by the films of Rainer Werner Fassbinder) revealing a series of violent-like grimaces of suffering business men and women.


To develop this work, soft balls were thrown at dancers during rehearsals which revealed their reflexive reactions, which, in turn, became the actual movements. Yes, the super straights may be “coming down,” so to speak, as if they were being shot dead on the very urban streets on which they work; but they do it with such jazz-inspired twists and turns of the body that it is difficult, just as in Longo’s paintings, to know whether they are in the last spasms of their lives or in pure ecstasy.


“Pulse,” with music by the wonderful American composer David Lang, takes the Ezralow dancers into a complete new dimension as they slide and spin across  the stage, stopping just long enough to come together and break apart (a bit like the somewhat slower encounters of “Brothers.”) The Chicago Tribune described the remarkable push and pull of the dancers: “The dancers, through flowing gestures, appear to spin imaginary helixes.” I prefer the notion of their interactions as being like magnetic fields of individual beings, attracted to and yet gravitationally pulled away from each other.


And finally, the humorous and lovely “Chroma,” (with costumes by American Apparel and using the much-abused music of Johann Strauss’ “The Blue Danube”) finds a way to literally shift and change each figure into another, woman into man, man into woman, supine beings into standing ones, creating a truly colorful world a bit like Ovid’s Metamorphoses.


I don’t know whether these dances and the others included in Primo Passo actually represent “first” steps, but, taken together, they certainly provide us with a vision of remarkable original steps and movements that turn the human body into forces that seem to defy gravity and amaze us with the contortions these bodies are able to endure. As Daniel Ezralow shown us throughout his career to date, his work so beautifully combines dance, theater, circus, cinema, music, and other arts that it is utterly impossible not to take pleasure in his stunning accomplishments, which the standing-room only audience at the Wallis’ Bram GoldsmithTheater clearly reiterated in their applause.