Bob Merrill | "Mira (Can You Imagine That?)" (from Carnival!) My Favorite Musical Theater Songs by Douglas Messerli

“Mira”
https://www.youtube.com/watch?v=lXwix_Iw2B8
Bob Merrill, Carnival!, 1961
Performer: Anna Maria Alberghetti, 1961
https://www.youtube.com/watch?v=i0lex7kZSBA
Bob Merrill, Carnival!, 1961
Performer: Joni James, 1961
One of my very favorite joys in the early 1960s was listening to the score of Carnival!, a gentle musical based on the 1953 film Lili with Leslie Caron in the lead role. The 1961 Broadway musical, with book by Michael Stewart and music and lyrics by Bob Merrill (previously of “How Much Is That Doggie in the Window” [a Patti Page song] and “Mambo Italiano” [sung by Rosemary Clooney]). The musical was filled with notable singers and performers, including Kaye Ballard, Jerry Orbach, Pierre Olaf, James Mitchell, and Henry Lascoe. But it was its star, young opera singer Anna Maria Alberghetti, who made it so special for me. 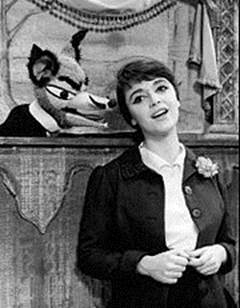 Her lovely lyrical voice, particularly in the song in which introduces herself and her background, “Mira,” was such a delight that I even learned its lyrics and probably could sing along even today. But it’s the song’s utterly guileless simplicity that makes it so very special as a plea for knowing the world in which you live, with the hope, particularly, that everyone will know your name. Even chairs become something that might come to know you. It seemed to harken to another time and a peasant culture that was surely already impossible in 1961.

I come from the town of Mira
Beyond the bridges of St. Claire
I guess you’ve never heard of Mira
It’s very small but still it’s there
They have the very greenest trees
And skies as bright as flame
But what I liked the best in Mira
Is everybody knew my name
Can you imagine that
Can you imagine that
Everybody knew my name
The musical, which also included memorable tunes such as “Yes, My Heart” and “Love Makes the World Go Around,” was one of producer David Merrick’s many hits, running for 719 performances, with several revivals in the years since.


I could hardly believe my luck when a traveling company decided to visit Cedar Rapids, near where I lived, to present the musical at Coe College. It was perhaps my very first professional musical theater viewing—although by that time I knew theater drama and musical theater better than anyone else in town. After all I had lived it through my imagination. Being somewhat a sentimentalist, I’m sure while watching it, I bawled my eyes out.


Years later, I met Anna Maria Alberghetti at an art opening, and couldn’t resist a blushing thank you for the joys she’d given me as a young man.