Cy Coleman and Carolyn Leigh | "Hey, Look Me Over" (from Wildcat) My Favorite Musical Theater Songs

If my readers might hold up their hands if they had ever heard of the Broadway musical Wildcat, by N. Richard Nash (book) and the then debuting team of composer Cy Coleman and lyricist Carolyn Leigh, I suspect that I might look out into a theater of no response. The entire production was centered around then 48-year old comedian Lucille Ball, making her Broadway debut, a production in which her production company, Desilu invested a substantial sum.


The musical was quite interesting, with a theme not so very different from Meredith Willson’s The Unsinkable Molly Brown of the very same (1960) year. Willson’s musical went on to become a hit, while Ball’s Wildcat Jackson character, although wonderfully feisty in the original performances, became ill with a virus and chronic fatigue (going on every night is a big difference from performing in a weekly comedy series), which destined her work to the very short run of 171 performances at Broadway’s Alvin Theatre. 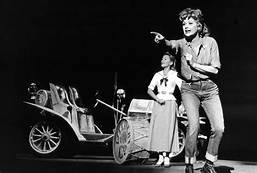 Coleman’s music, however, included several wonderful numbers, including the incredibly comical piece, “What Takes My Fancy,” and the lovely ballad by co-star, Keith Andes, “Tall Hope.” Sven Svenson (who later appeared in the composer’s Little Me) appeared in a minor role and later television star, Valerie Harper appeared in the chorus.


But the great number from this work, much like that of Willson’s Unsinkable Molly, spoke of the grit and survival of its major character, the “Wildcat” of the title, devoted now to finding a new oil well to make her fortune. That musical number, “Hey, Look Me Over,” was a kind complex paean to both “looking at her” and “over her,” allowing her to enter a world that was simply intolerant to such a strong feminine force, out of money and deep in debt.

Hey, look me over
Lend me an ear
Fresh out of clover
Mortgage up to here
But don't pass the plate, folks
Don't pass the cup
I figure whenever you're down and out
The only way is up.

That song was not only attuned to Ball’s continually rocky career—she was soon to divorce then husband Desi Arnaz—but to a life that might have almost been brilliantly expressed in Stephen Sondheim’s Follies’ figure who sings “I’m Still Here.”


The fact is that Ball was not “all here,” and her illness and even collapse on stage during one of her performances, suggested she was not the same Lucy who we had all loved on television for so long. But dozens of singers, young and old, later took up her banner song, and helped to make it a big hit, among them, the consummate singers Rosemary Clooney and Judy Garland, and, later, Bea Arthur.


On a day where I have been listening to the remarkable stories of Houston people who, despite incredible odds, have still come through to survive the terrible floods that have engulphed their community, I might almost nominate this song as a marvelous expression of their conditions and fortitude.

Posted by Douglas Messerli at 2:02 PM