E. Y. Harburg and Burton Lane | "How Are Things in Glocca Mora?" (from Finian's Rainbow) My Favorite Musical Theater Songs

“How Are Things in Glocca Mora?"

The story of the 1947 musical by E. Y. Harburg and Burton Lane might almost have jumped out of today’s newspapers: it features an immigrant family, where the elderly Irish Finian McLonergan, decides to decamp in the American South—a kind of Kentucky mixed with Mississippi—with his daughter Sharon, along with a somewhat fiendish Irish leprechaun, from who he’s stolen a pot of gold, which he intends to bury in Fort Knox. 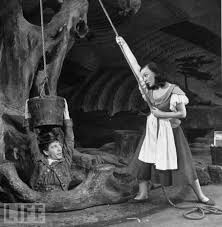 The local factory workers and farmers are being attacked by the bigoted local authorities, who are definitely in control of the Jim Crow politics of the day. There could never have been a more political musical ever created (well there is now Hamilton), and Harburg, Fred Saidy, and composer Burton Lane meant every word of their impassioned plea about bigotry, anti-immigration behavior, and every other prejudice that their musical shouted out.
If Finian’s Rainbow is an incredulous mix of politics, nonsense, and utter fluff, it still today speaks out for a kind of musical theater that we might wish for, one in which a passionate political viewpoint is infused with great musical theater.
Created in the year I was born, it seems to be a work which I might never been able to resist. I appeared in the high school production as the only black-faced figure of my all-white school production (no black attended my Marion, Iowa school), and I later played a dancer and singer in this work in the University of Wisconsin production, several years later. Obviously, I have a very special relationship with this musical that makes it almost impossible for me to separate if from my very identity. And even today, as crazy as its story seems to me, I love it with an intensity that probably has little to do with its real qualities.
When, years later, at an event which I hosted (and partially funded) celebrating the career of Jerome Lawrence, I experienced Lane playing a song from the work in person, I realized that I had assimilated Finian’s Rainbow in a way that no one in the room, in New York’s famed Algonquin Hotel, might have ever realized. Even the presence of Michael Feinstein, Jerry Herman, and many other luminaries, could not match that moment.
Og, Finian’s angry leprechaun, was there, as far as I was concerned (and I later discovered that figure of my college production was indeed there [see My Year 2005]) or, at least, nearby.*
Early in this play, the newly arrived Sharon, sings a passionate song about her longing to return home, “How Are Things in Glocca Mora,” which tears at your heart. We know, immediately, she is not yet comfortable in her new world, although she has just met the handsome local union leader, Woody Mahoney, and soon falls in love. But Sharon’s song exists as an almost inexpressible longing for her homeland, something almost all of Americans must have felt upon their travels to the new home in the USA. It’s a terribly touching expression of alienation that seldom gets expressed in the American musical, one that ought to be attended to in order to understand what immigrants, legal and illegal, might feel about their new experience in the country which supposedly accepts all strangers.

I hear a bird, Londonderry bird,
It well may be he's bringing me a cheering word.
I hear a breeze, a River Shanon breeze,
It well may be it's followed me across the seas.
Then tell me please

How are things in Glocca Morra?

And, of course, as Finian’s Rainbow reveals, it’s never an easy transition, although, Sharon, her father, and even the strange Og do find a way to assimilate themselves even in the  prejudiced deep South, a situation which Og helps to take care of that by transforming the local white Senator into a black man. O how I might wish for such a transformation for the Kentucky-born Senator today!
The original Sharon in the musical, Ella Logan, sings this song quite beautifully. But it is fascinating how, later, the superlative singer Rosemary Clooney takes this simple piece of nostalgia into a new jazz-oriented work. Glocca Mora suddenly seems to have been transferred to the new world in which Sharon finds herself.
In the 1968 movie, directed The Godfather’s Francis Ford Coppola, English singer Petula Clark sang the same song so brilliantly that she certainly must be recognized as among its best interpreters.

*As I mention in that volume, I accidentally came into contact with my Wisconsin theatrical cohort in a gay psycho-sexual situation in a Brooklyn, New York apartment—to which I possibly had not even been invited—several years later. Strange coincidences also happen to me.

Posted by Douglas Messerli at 6:56 AM