My Favorite American Stage Musical Songs.
“Adelaide’s Lament”
https://www.youtube.com/watch?v=B-UHDhOJI48
Frank Loesser, Guys and Dolls / 1950
Performer: Vivien Blaine on the 25th Annual Tony Awards, 1971
https://www.youtube.com/watch?v=VLdCahQz5tY
Frank Loesser, Guys and Dolls / 1950
Performer: Faith Prince in the 1992 Broadway revival
The singer of this hilarious song, Miss Adelaide—who works as the head chorus girl in a nightclub, The Hot Spot, where the routines are straight out of burlesque—has a serious problem: for years she has sniffled, sneezed, and coughed her way through life without any of the “Vitamin A’s” or “Bromo Fizzes” having any effect in relieving her illness. In this wonderful song, she realizes, while reading a book on the subject, that her endless cold represents a series of “psychosomatic symptoms” with regard to still being single after 14 years of dating her boyfriend, gambler Nathan Detroit, who simply will not give up his calling to marry her, despite several abortive trips to Niagara Falls, always ending  in the racing tracks of Saratoga. 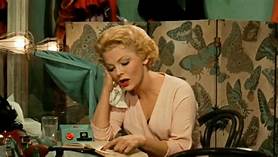 Frank Loesser’s Guys and Dolls, one of the best of the American musical stage, is filled with brilliant songs and lyrics; but this one, in particular, is his very wittiest, with unexpected twists of medical jargon and its attendant rhymes:


Part of the humor, of course, is based on the fact that this uneducated chorus girl is reading a medical text, replete with footnotes, and, in the process, diagnosing her own problems. Rhymes such as “lurk” / “work” / “clerk,” moreover, can only be comprehended through the aural lens of the New York-Brooklyn accent made up by author Damon Runyon.
Loesser might have given us just one of two of these clever stanzas, but “Adelaide’s Lament,” like so many of his Guys and Dolls songs tells an entire story, spinning out in a series of nearly 12 narrative stanzas. Just when you think there could be no funnier line than the one about where “the streptococci lurk,” he jerks you into a new world where Miss Adelaide discovers:


Here the “Fizz” / “is” / “his” says it all. It’s not her problem that she’s got an endless cough, but Nathan’s constant ‘putting off” the marriage.
The great comic actress Vivian Blaine sang it on stage and in the movie both, creating such a memorable performance that it might never have been matched—that is until Faith Prince sang it in the 1992 Broadway revival. If Blaine’s version is more believable, making her entirely sympathetic, Prince’s husky, more comedic mugging makes you love her just because she can get away with it without turning Miss Adelaide into a cardboard figure.
Indeed, this song is so central to the story that it explains not only Nathan’s and Adelaide’s dilemmas but spills over into the primary lovers’ lives as well, paralleling gambler Sky Masterson’s romance with the Save-the-Soul-Mission preacher, Sergeant Sarah Brown. It’s hard to imagine that in Loesser’s original version, there was no Adelaide. He added the role just to accommodate Blaine’s talents.