The gambling hero of Guys and Dolls, Sky Masterson’s, major song, “Luck Be a Lady,” appears quite late in the musical, and even then is sung in the bowels of New York City’s sewers. One might never have imagined that such a rousing prayer to the heavens sung so gloriously at such low depths, both psychically and spiritually. Yet Sky’s bet, matched by almost all of these low-denizen dice-tossers, strangely enough, is primarily an attempt to save their souls, or, at least, to pretend to save their souls by requiring them to attend a spiritual gathering at his would-be lover’s Sergeant Sarah Brown’s Save-a-Soul Mission, a venture that may save her job and redeem Sky’s apparent deception.


It is hard to imagine so much “evil” behavior devoted to such absolute “goodness,” but then that’s the true delight of Frank Loesser’s impossible-to-forget song. 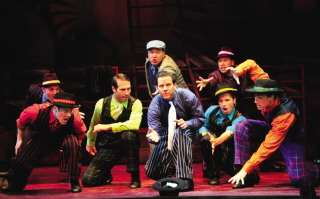 Sky sings not to the gods, but the Lady Luck herself, the goddess to whom he has spent most of his life bowing. This goddess is a lady—or in the lingo of his world, a dame—but of course that “dame,” this time around, psychologically speaking, is a stand-in for a preacher woman, which makes the song even more fun. In the hell of his world (a sewer lit up in garish greens, blues, reds, and purples) he is unconsciously praying to a higher authority, human love itself, and in a manner that is strangely enough not very different than a prayer to a deity; after all, the man has spent many years of his life reading the Gideon Bible in cheap hotels.

They call you Lady Luck.
But there is room for doubt
At times you have a very unladylike way of running out
You're this a date with me
The pickings have been lush
And yet before this evening is over you might give me the brush
You might forget your manners
You might refuse to stay and so the best that I can do is pray.

A bit like a jealous lover, his “lucky protector” may behave badly, may leave him for other men, or, even more sexually suggestive, blow on their dice.

A lady doesn't leave her escort
It isn't fair, it isn't nice
A lady doesn't wander all over the room
And blow on some other guy's dice.

The macho terms of this song demand that his “lady friend” remain loyal to him, no matter what he does. But in his song of prayer, Sky also reveals that he attends to be loyal to his lover, Sarah Brown, a relationship later consummated in a true Broadway marriage. That Lady Luck does remain loyal to him is nearly a miracle, but then, that’s what this musical is entirely about: a series of miraculous transformations that occur in the midst of selfishly bad behavior. Nearly everyone in this marvelously joyful work gets converted in one way or another. Even mobsters join in singing “Hallelujah,” particularly when Nicely Nicely perceives the errors of his ways in another of my favorite songs from the work, “Sit Down You’re Rocking the Boat.”


The original Broadway Sky Masterson, Robert Alda, beautifully sings this ballad of sinful love in a full-voiced rendition that reiterates the macho elements of a song in which a full male chorus joins him.

Similarly, Frank Sinatra regularly sang this paean to love in a more authoritative, jazzier manner; Sinatra, it has been reported, was more than little disappointed that he was tapped to play Nathan Detroit in the movie version instead of more appealing Sky. And singing this song was clearly his way of taking over the role from Brando.


In the 1992 Broadway revival, which I saw, Peter Gallagher sang it also quite beautifully and with a zest that the song seems to demand.


Yet, the quieter-voiced, almost shyly sung Marlon Brando movie version, is my very favorite. Brando sings it almost with a reverent, boyish infatuation that makes you truly believe in his adoration not only with “luck,” but his luck in having found the highly religious Sarah Brown. Now he truly may have someone with whom he can discuss the fine differences between Shadrach, Meshach and Abednego. And after all, isn’t one of Damon Runyon’s points that every marriage is a kind of gamble. Despite what may seem as an utterly odd pairing, they’re obviously perfect for one another, which this song makes apparent.

Posted by Douglas Messerli at 10:13 AM