“I Know Your Kind”

Harold Rome, who wrote the lyrics and music to this 1959 musical, is a somewhat ignored treasure to major contributions of the American musical songbook. Strangely, this almost now-forgotten Destry Rides Again, based on the 1939 film starring  James Stewart and Marlene Dietrich, is simply packed with memorable numbers, so much so that I had difficulty in winnowing down my choices to only two. 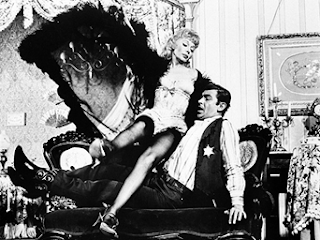 Several of the other numbers such as “I Hate Him,” and actor Andy Griffith’s long elusive telling of where he has come from, “Only Time Will Tell,” have far more clever lyrics—Rome was a genius lyricist. But Frenchy’s wonderful attempt at seduction, “I Know Your Kind,” with basically simple lyrics but with a wonderful tango-like rhythm, is certainly a charmer. It belongs to the tradition of “Whatever Lola Wants, Lola Gets” from Richard Adler and Jerry Ross’ memorable 1955 musical, Damn Yankees; and was repeated again, this time by a male seducer, character George Musgrove (Swen Sevenson), who performs a kind of strip tease to seduce his girl in Cy Coleman and Carolyn Leigh’s Little Me of 1962.


And even here, lines such as “Your eyes may say no, but what a volcano, they reveal,” are unforgettable. Jazz groups such as the Roland Hanna Quartet immediately knew a good thing when they heard, and quickly adapted it for their own purposes.


Dolores Gray sings this song as the kind of temptress that Marlene Dietrich imagined herself to be, but which Gray truly was—at least in this musical—her sultry voice challenging the new rube in town to a bedroom chat.